IDT employees are used to hearing from Environment, Health and Safety (EHS) Manager Heath Hospodarsky. When it comes to compliance and environmental safety at work, it’s the job of his staff to make sure all associates are in tune with the latest policies and practices.

But even away from IDT’s Coralville, Iowa, headquarters, however, many colleagues still hear from Hospodarsky. Since the age of 11, the Waterloo, Iowa, native has been playing in bands, including nationally touring acts.

“My guitar and music have almost always been a part of my life,” he said. “They’ve always been there as I’ve grown in my education and my career.” 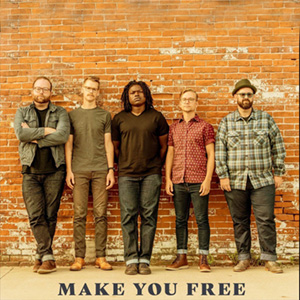 These days, Hospodarsky plays guitar for numerous band gigs and studio sessions, including Iowa City-based James Tutson and the Rollback. The band, which he describes as “roughed-up soul,” plays local clubs and outdoor music and arts festivals. The group can also be found playing at venues like the Englert Theatre or Big Grove Brewery, both of which are in Iowa City. The Rollback’s most recent release, “Make You Free,” was recorded in Nashville and Los Angeles with producers who have worked with Paul McCartney, Ringo Starr, Bruce Springsteen, U2, The Strokes, and Andrew Bird.

Hospodarsky previously played guitar for Giants, a national-touring rock band that crisscrossed the country many times over.

“All of the Giants music was instrumental,” he said. “We were fortunate enough to have had our music featured in many documentaries, and on MTV, NPR and elsewhere.”

Hospodarsky is currently involved in the early stages of a project with Giants bass player Dave Livingston, who is a shipping logistics clerk at IDT.

“We want to bring back some good rock and roll—think Manchester Orchestra—mixed with some twang—think Pinegrove,” he said. “Dave and I have played music together since high school, so we have a good relationship when it comes to writing and playing together. Like any relationship, over time that trust grows, and writing and playing together just becomes second nature.”

Hospodarsky said that his job as EHS manager positively affects his performance as a musician.

“I have always been meticulous about music and I think that transfers over a lot into my job at IDT,” he said. “My goal is to have a great finished product, something that is well thought out, and something that I’m happy with. I think the same approach applies to my career at IDT.”