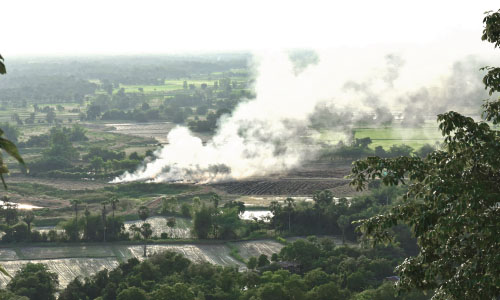 Here’s a compelling thought: If we planted the right crops, could we slow or even reverse climate change?

As of now, the answer to that tantalizing question is a big, fat maybe. But, if it ever does happen, synthetic biology will likely play a huge role.


Why are Plants Important?

Plants already do a lot of cool things for us. They provide us with food, shelter, medicine, fuel—and oxygen. But in this new challenge, scientists are wondering aloud if plants could be optimized to expand their natural ability to capture and store the compounds that are slowly making Earth uninhabitable.

The theory is being explored by a team of scientists at the Salk Institute in La Jolla, California.

Last year, the institution revealed that it had received more than $35 million to fight climate change, and that it was launching a program called the Harnessing Plants Initiative, “an innovative, scalable and bold approach to fight climate change by optimizing a plant’s natural ability to capture and store carbon and adapt to diverse climate conditions.” This year, the organization held a two-day symposium on the topic.

“The problem is, we have continuously cut down forests and increased CO2 emissions over the millennia, leading to a planet-warming build-up of CO2 in the atmosphere,” explained Massive Science. “Unfortunately, planting more trees is not enough to absorb the excess carbon dioxide that humans have created.”

The team at Salk is focusing on suberin—AKA cork—which absorbs carbon but resists decomposition, which would release carbon back into the atmosphere.

“By understanding and improving just a few genetic pathways in plants, Salk’s plant biologists believe they can help plants grow bigger, more robust root systems that absorb larger amounts of carbon, burying it in the ground in the form of suberin,” the company states.

The product, Salk Ideal Plants, will have a “deeper and more robust root system” which will pull carbon out of the atmosphere and store it longer than typical plants do. The technology will then be transferred to six prevalent crops: corn, soybean, rice, wheat, cotton/cottonseed, and rapeseed/canola. The company also hints that taking this technology to coastal and aquatic plants could further help fisheries, coral reefs, and coastal restoration efforts.

The idea of using farming to slow or reverse climate change is creeping into political dialogue and corporate plans.

Democratic presidential candidates this year put forth plans which would back an initiative like the one from Salk, signaling that the idea could become more mainstream. The plan from Pete Buttigieg, for example, argued that climate policy had to include farmers as part of the solution and investments in research and development that could include soil carbon sequestration. The presumptive Democratic presidential nominee, Joe Biden, declared last summer that “Soil is the next frontier for storing carbon.”

Corporations are lining up to back the idea as well. A representative from Shell, for example, said that natural climate solutions like carbon sequestration are “scalable now and offer significant opportunity for carbon dioxide removal.” And so are venture capital startups. Indigo Agriculture, another example, has raised hundreds of millions of dollars to build up its own soil carbon business.

But while the hype is real, the promise of storing carbon in plants and soil is still in the theoretical stage, notes Technology Review.

“It’s unclear whether the practices can be carried out over long periods and on a massive scale across the world’s farms without undercutting food production,” the site reported. “And there are significant disagreements about what it will take to accurately measure and certify that farms are actually removing and storing increased amounts of carbon dioxide.”

Among other problems is the likelihood that carbon uptake differs by soil type and climatic conditions, meaning that sequestration rates would differ not just from region to region but even from plot to plot. Also, the money offered in a carbon uptake program, and the possibility that the proposed practices can sometimes reduce yields, could both encourage farmers to raze forests and plant crops, releasing yet more carbon.

“Carbon farming is seductive,” stated Technology Review. “What’s not to love? But that means policymakers and standard setters have to be all the more careful to resist wishful thinking, and establish rigorous rules and processes.”