In his position as a staff scientist who concentrates on research and development for IDT’s Molecular Genetics group, Michael Collingwood is adept at doing research involving bacteria. A few minutes in the lab last summer, however, unexpectedly made him go viral.

Collingwood, who holds black belts in karate and taekwondo, surprisingly became an internet sensation by playing the lead role in a humorous video in July 2019 that became IDT’s most viewed, shared and engaged social media post ever. 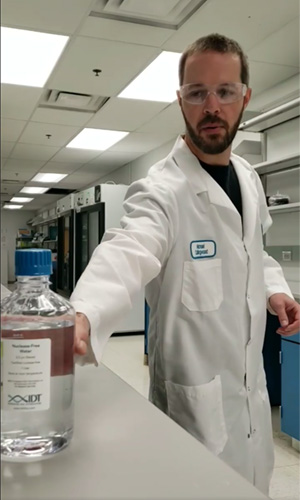 “I had no idea that it went viral,” the native of Vinton, IA, said. “I didn’t worry too much about my 15 minutes of fame!”

Collingwood was working in the lab in Coralville one morning when Garrett Rettig, director of product development, responded to a marketing department query seeking someone capable of attempting the latest popular online challenge: the Bottlecap Challenge.

The challenge, which had become an international sensation, involved people recording themselves attempting to knock the cap off a bottle with a roundhouse kick. It required a swift leg kick, precise aim and a deft touch. As it turned out, online videos of successful attempts were dwarfed by the epic failures. Bottles flying, liquids spraying and toes stubbing were being watched over and over and over.

In the video that appeared on Facebook and Twitter, Collingwood lines up a bottle of purified lab water and takes three wild roundhouse swipes, missing it entirely each time, including one that ended with an accidental foot thump on the counter. As it’s going on, Rettig appears, subtly shakes his head and walks past, lifting the cap off as he passes. A seemingly embarrassed Collingwood looks at the floor, turns and sheepishly walks away.

With an introduction that read, “Ever wonder if scientists do the #BottlecapChallenge in the lab?”, the video was seen online by nearly 60,000. It received more than 3,000 engagements and was shared by approximately 400 social media followers. Truth be told, however, Collingwood wasn’t nearly as inept as he appeared. In fact, even though he was unaware of the Bottlecap Challenge, he successfully accomplished the feat with a roundhouse kick.

“We did a few takes of me attempting to hit the cap off the bottle but then we were looking for other ideas that might be humorous in a lab setting,” Collingwood said. “I know people appreciate a good laugh and it’s good to show that scientists can have fun, too.”

Fittingly, he’s very serious about research and martial arts. Collingwood is particularly proud of his work on the development of the Alt-R CRISPR-Cas9 genome editing system.

“There was a lot of learning along the way,” he said. “One of the best ways to really learn something is by having to troubleshoot any issues that arise. It forces you to go over every step and scrutinize anything in that procedure that may have caused the problem you’re seeing. Our success with purifying Cas9 has led to a big movement to produce proteins in large-scale production for customers.”

Collingwood said that his troubleshooting skills have benefited from his work in martial arts.

“There are many aspects of both science and martial arts that have overlap,” he said. “Research involves a lot of troubleshooting. Being able to analyze why an experiment failed and how you can adjust and try something different. The same is true for martial arts, where some techniques or moves aren’t fully understood by a student, and you’re forced to come up with a new way of explaining or showing the motion or idea.”

And that’s the true challenge.