Research profile: Learn how the Högberg Lab designed a simplified DNA scaffolding method, including software that quickly determines the “oligonucleotide staples” required to fold a ssDNA sequence into any desired shape.

At the Karolinska Institute, in Stockholm, Sweden, Dr Björn Högberg’s laboratory studies nanoscale engineering with DNA. Using the self-assembly properties of DNA, the scientists wanted to create DNA scaffolds. As one application, the team envisioned using these nanostructures for exact positioning of proteins and other molecules. Such technology could potentially be applied to create protein patterns to study cell signaling, deliver drugs, produce very pure DNA oligonucleotides enzymatically, and build DNA devices like molecular sensors.

To execute some of these applications, the team needed a tool to make very general shapes out of DNA. Using current DNA origami methods, it is already possible to generate many different shapes on the nanoscale level. However, Dr Högberg hoped to simplify existing methods. He explains, “What we really wanted to do was develop a method by which you could simply sit down at your computer, draw a 3D shape in 3D imaging software, and then convert it to DNA. The process is analogous to macroscopic 3D printing methods, where you use computer software to draw a 3D structure, and a 3D printer to produce your structure in plastic, metal, even cells.”

A “Bridges of Konigsberg” challenge

3D graphics programs frequently use polyhedral and triangulated meshes as basic elements to create structures. This gave the researchers the idea to trace DNA through an entire structure, using 1 double helix per edge of the mesh, a concept borrowed from Leonhard Euler’s “Bridges of Konigsberg” problem (see Definitions, below). Högberg notes, “In DNA origami you have one long ssDNA, which we call the ’scaffold,’ that threads through the entire desired structure. It is held together by short oligonucleotide 'staples' that bind to the scaffold sequence. For our model, we needed to create DNA polyhedral and triangulated meshes. It required a lot of mathematical expertise to determine how to weave the scaffold strand through the polyhedral mesh. Ideally, we wanted the strand traverse every edge once and only once, and get back to where we started.”

“Using 1 double helix per edge of the mesh is an advantage,” says Högberg. “If the DNA was routed back and forth several times on every edge, it would take up much more space and much more DNA. It would be difficult to generate the same resolution figures, and it would be difficult to make the structures as big as they are. To do it with just one helix per edge was also a scientific challenge, because it was a very hard problem to tackle—and we wanted to prove that it was actually possible.”

In collaboration with the lab of Pekka Orponen at Aalto University in Finland, Högberg’s group developed an algorithm that could predict the DNA staple sequences required to create “mesh origami”, specific structures formed from polyhedral meshes of scaffold DNA. Structures are formed from the polyhedral meshes by varying the sequence of the staples that are used to guide the scaffold DNA conformation. The sequence of the scaffold is less important than the staples, and a single scaffold can be used to create multiple structures [4].

Of course, there are situations—structures, and certain collections of triangles—where it is not possible to route the DNA with only one helix per edge, and thus, there will need to be double edges in some areas. One of the first things the algorithm tests when presented with a proposed structure, is whether it is mathematically possible to route DNA through the shape with only one helix per edge.

Figure 1. Polyhedral mesh designs. Desired shapes are constructed as a mesh of triangles. A course is designed that passes over all the edges of the mesh, without crossing and with preferably only one traverse per edge. The resulting course determines the route of a DNA scaffold strand that is held in place by short DNA “staple” sequences.

The beauty of the software, named vHelix, is that it automates everything—one can simply load the sequence of the scaffold strand, draw a desired shape on the computer, press print, and the algorithm provides “the design” in the form of the approximately 200 short oligonucleotide staples needed to fold the scaffold strand into the shape [4]. The lab can then order the DNA staple sequences from a custom oligonucleotide manufacturer and assemble the structure.

Högberg’s laboratory uses oligonucleotides from IDT. “IDT’s service has been very good, and Alicia Bergsten, the IDT Nordic Sales Manager, has been really helpful in selecting the right products for our research. We have been getting oligos quite fast, which is important for us because we need to test new structures all the time, and each shape requires an entirely new set of oligo staples. And we order everything in plates, because it is more cost-effective,” confides Högberg. To further offset costs in experiments that require protein positioning, the lab designs some of the staples with a common protruding end sequence. They then purchase a single, more expensive amine-modified oligo that they anneal to these protruding ends; the staple:modified-oligo hybrids are conjugated to proteins, allowing the researchers to position proteins at specific locations in the scaffold.

The long scaffold DNA strands are generated in the lab from bacteriophage grown in E. coli. The scientists have constructed variant bacteriophage clones to produce different scaffold DNA lengths, some as long as 9000 nt. Within hours of inoculation, viral particles are ready to be collected. The bacteriophage genomes are packaged in single-stranded form, providing a lot of easily accessible ssDNA. To generate a DNA shape, the ~200 oligonucleotide staples are mixed with the long scaffold DNA. The mixture is heated to 80–90°C, and then slowly cooled down overnight, allowing the mesh origami structure to form. 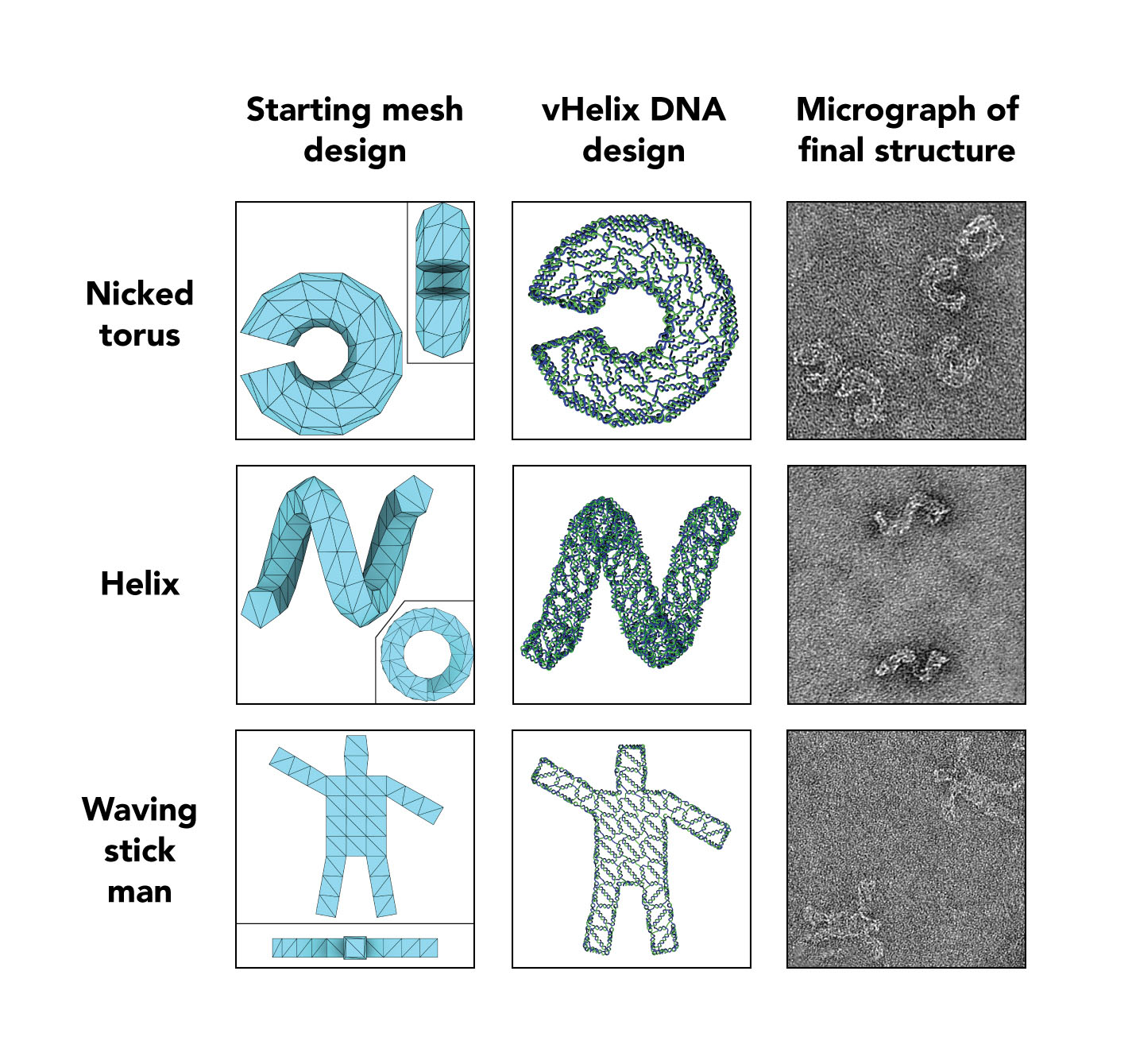 Another positive outcome from the vHelix algorithm is that the mesh origami structures produced are actually more stable in physiological salt conditions than the original DNA origami designs that the scientists had been using. These previous designs were more tightly packed, and the negative charge of nearby DNA strands affected structure stability. To stabilize these shapes, it was crucial to add additional magnesium to cell culture medium. In the mesh origami structures, the DNA helices are not as closely packed, negating, or at least lessening, the effect of the negative charge. The research team has even demonstrated that their mesh origami structures actually fold directly in cell culture medium [4].

The laboratory is now working on using the structures for in vivo experiments. Other scientists have been performing animal experiments by directly injecting DNA origami into mice; however, those structures degrade quite fast. The mesh origami structures appear somewhat resistant to nuclease activity, but, as occurs with unmodified DNA, when added to the cells, they eventually degrade. Use of chemical modifications of the scaffold and staple sequences to provide nuclease resistance has yet to be explored.

Several experiments are also focused on methods of chemical conjugation to produce protein-modified mesh origami. The scientists have used the mesh origami structures to position proteins on the nanometer scale. They then use these protein patterns to look at the Ephrin/Eph signaling pathway [5]. They can even modulate the pathway, not by increasing or decreasing the concentration of protein, but by altering the distance on the nanometer scale between the proteins.

The lab has also used their mesh origami structures to perform drug delivery experiments that address how to make DNA structures more receptive to uptake of intercalators, such as doxorubicin (used in cancer treatments). And, colleagues in the physical sciences are using mesh origami to position gold nanoparticles to create optically active devices that can bend and twist light, and to assemble nano-electronics.

Do you have a structure you would like to build?

Using the lab’s mesh origami technology, a 3D DNA shape can be generated in just a couple of minutes. Högberg’s lab makes their folding algorithm available to the research community by providing a web source for scientists to submit their own shape for conversion into DNA. You can submit your 3D mesh to their (vHelix server), and it will send you the oligo staple sequences required to fold it.

The complementary base-pairing and self-assembly of DNA makes it a useful construction material. Long, single-stranded DNA (ssDNA) can be folded into 2- and 3-dimensional, nanoscale structures that are held together by short oligonucleotide “staples”. This controlled folding of DNA to create non-arbitrary shapes is the defining feature of DNA origami, which was first described by Paul Rothemund in 2006 [1], and further developed in the laboratories of William Shih [2] and Kurt Gothelf [3].

A popular mathematical problem, the “Bridges of Konigsberg” was based on the 7 bridges that connect the mainland and 2 islands across the Pregel River in the Prussian city of Konigsberg (now Kaliningrad, Russia). The challenge was for people to find a route through the city that would cross each of the 7 bridges only once. Leonhard Euler, a prominent 18th century Swiss mathematician, addressed the problem in abstract terms, proving that the problem was unsolvable, and in the process, provided the foundations for graph theory.

Use to deliver drug molecules or develop novel biosensors and nanodevices.