A next generation understanding of immune response

See how scientists use gBlocksGene Fragments and PCR-amplified DNA in assembly PCR of antibodies to study the immune system's response to patients receiving flu vaccinations.

The laboratory of Dr George Church, at Harvard Medical School in Boston, MA, has pioneered many methods in next generation sequencing (NGS) and synthetic biology. Dr Francois Vigneault is a postdoctoral fellow working in the Church lab, and his research in the area of “immune sequencing” takes advantage of this expertise to examine when and how the immune system responds to infection, disease, and immunization.

Dr Vigneault and his colleague Uri Laserson are currently using immune sequencing to study the response of patients to flu vaccinations. Following vaccination, they identify and quantify mRNA expression for all antibodies in each patient sample, using NGS, at multiple time points during the immune response. From the NGS data, containing thousands of sequences, the group identifies a handful of highly expressed light- and heavy-chain variable domain (VL and VH, respectively) sequences that they believe are related to the response under study. The variable domain, complementarity-determining regions (CDR) of the VH and VL domains are the necessary regions for recognizing specific antigens, and the CDRs of the antibodies that they believe are related to the response are cloned for further study (Figure 1).

Finding the most effective antigen binding sequences could have substantial diagnostic and therapeutic potential, and this approach is particularly powerful because new technologies allow Dr Vigneault and his colleagues to study the immune response in greater detail than has been previously possible. 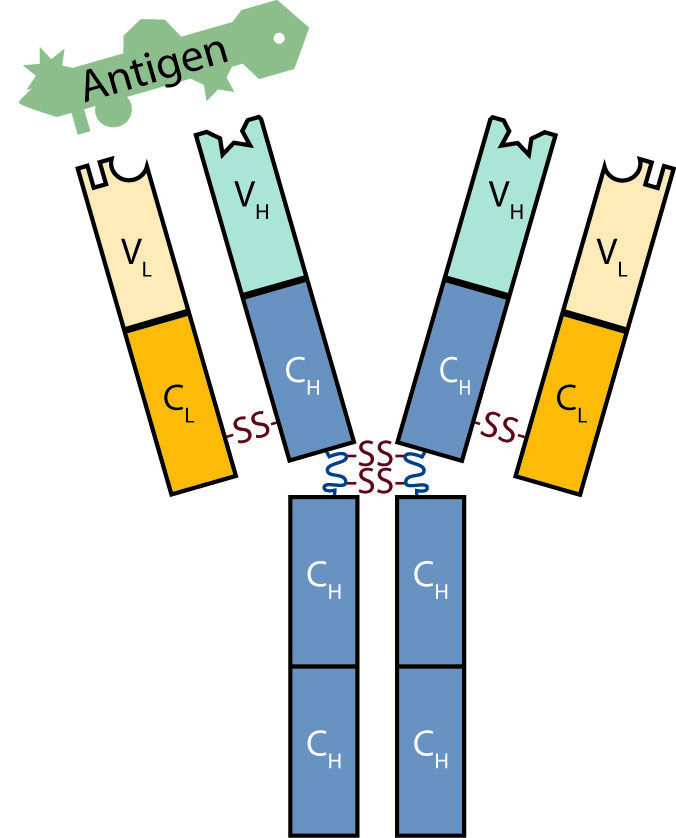 Figure 1. Antibody structure and domains. Antibodies (IgM, IgD, IgG, IgA and IgE) are made up of 4 peptides—2 identical light chains (shown in yellow) and 2 identical heavy chains (shown in blue). The light chains are made up of 2 immunoglobulin (Ig) domains—1 variable (VL) domain and 1 constant (CL) domain. The heavy chains are made up of 4 or 5 Ig domains—1 variable (VH) domain and 3 or 4 constant (CH) domains. Each Ig domain comprises approximately 110 amino acids, encoded by approximately 400 bp of DNA. The light chains are joined to the heavy chains by individual disulfide bonds, and the identical halves of the antibody are joined by a pair of disulfide bonds between the heavy chains. The VL and VH contain the complementarity determining regions (CDRs), and pair in countless combinations to create a diverse pool of antibodies with highly specific antigen (dark green) binding sites.

After antibody sequences are identified, Dr Vigneault and his collaborators need to match the correct VH and VL sequences to reconstitute the best-performing antibodies. However, because antibodies are produced by random pairing of VH and VL transcripts, finding the correct combinations can be daunting. Dr Vigneault explains, “If you independently PCR amplify the VH and VL repertoires from an individual, you can randomly join the resulting VH and VL libraries to generate a combinatorial library. However, with a combinatorial library, there are so many potential combinations that it becomes statistically almost impossible to identify the effective VH–VL pairings that were originally produced by the B cells in that individual.” By focusing on only a handful of highly expressed VH domains to join with the larger pool of VL domains, and subsequently using phage display to analyze binding specificity of the resulting constructs, Dr Vigneault is able to increase the probability of finding the right combinations.

The selected VH sequences are ordered from IDT as gBlocks Gene Fragments. With a maximum length of 3000 bp, the double-stranded, sequence verified, gBlocks Gene Fragments are an obvious choice for cloning variable regions in antibody heavy chains, which are approximately 400 bp in length. The VH domains are then joined, with a short glycine–serine linker, to VL sequences from the cDNA sample to generate complete single-chain variable fragments (ScFv, Figure 2).

“There are other advantages to using gBlocks Gene Fragments,” notes Dr Vigneault. “It comes down to cost. If you want to make a thousand unique sequences, the cost per bp is $0.20 with gBlocks Gene Fragments. And, the turnaround time is quick. You can get them in three days, and everyone is going to be happy about that at that price point.” 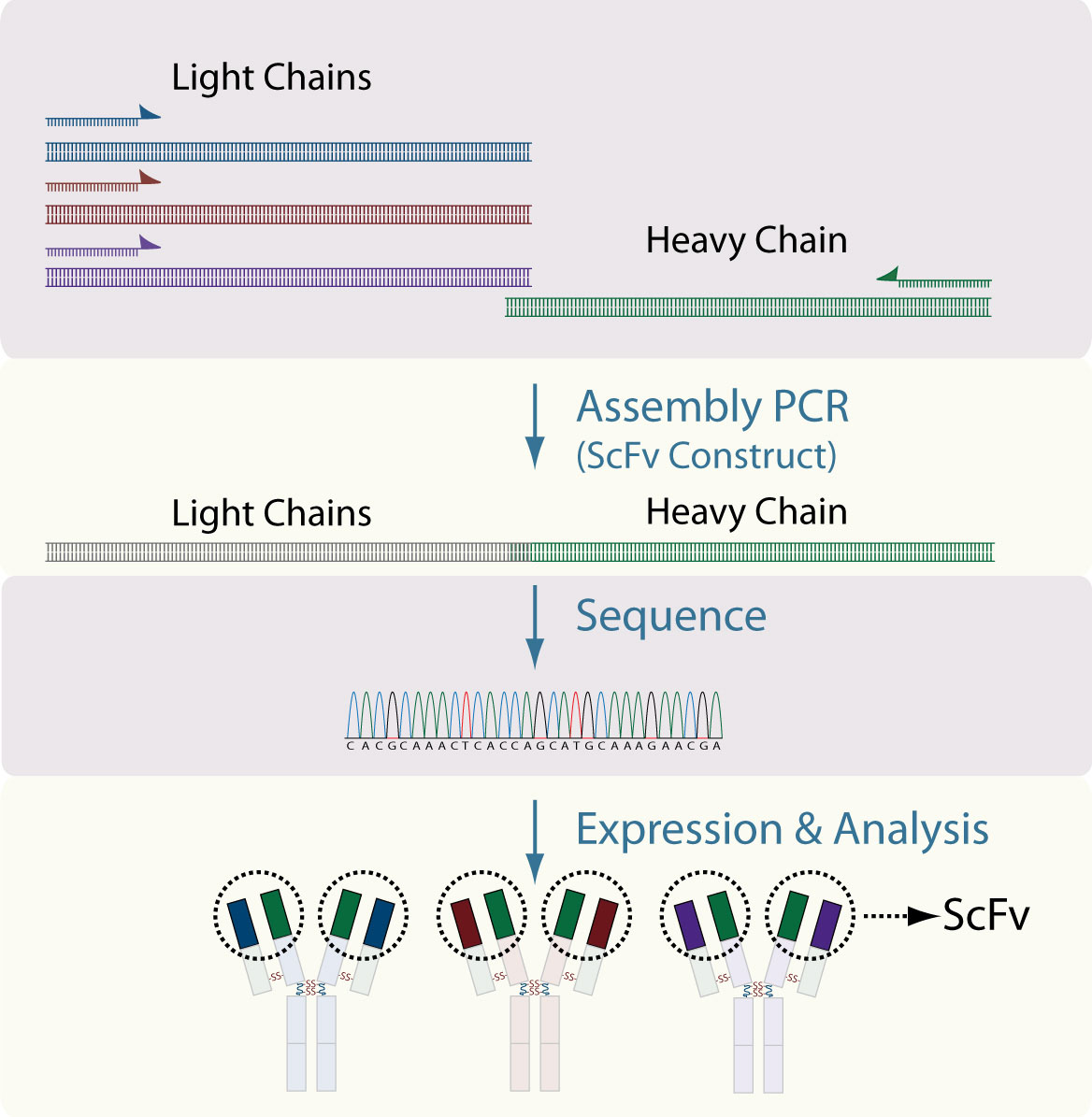 Figure 2. Assembly PCR of antibodies with gBlocks Gene Fragments and PCR-amplified DNA. Relevant, expanded populations of antibody variable domains are identified by deep sequencing. Select heavy-chain variable (VH) regions are ordered as gBlocks Gene Fragments and the light-chain variable (VL) regions are PCR amplified from patient cDNA to create a VL library. The gBlocks Gene Fragment VH domains are assembled with the library of VL domains by assembly PCR to create pools of single-chain variable fragments (ScFv). The ScFv libraries are then cloned into an appropriate vector and expressed for phage display, or into a mammalian expression vector containing antibody constant domains for expression of IgG-like antibodies.

Once the antibody sequences are cloned, they are sent to the lab of Dr George Georgiou, at the University of Texas at Austin. There, William Kelton and Sang Taek Jung analyze the subset of antibody domains by phage display and surface plasmon resonance to determine which are most effective at binding present antigen, and the kinetics of that association. This data is further compared to the original NGS data to determine the time points at which the most interesting antibody sequences are expressed during the immune response.

Dr Vigneault explains, “It is not really the method that is unique, but the amount of detail that we are able to gather about the immune response by combining these methods that makes this a remarkable project.” Such information could be useful in the future for providing more accurate diagnoses, treatments, and vaccines for a variety of infectious and noninfectious diseases that involve the immune system.

“We and others have been through many approaches to synthesizing our antibodies", notes Vigneault. The lab routinely uses oligonucleotide arrays when assembling large numbers of inserts to be cloned, and assembles those using a separate PCR protocol developed in the lab specifically for oligo arrays, spearheaded by Sri Kosuri [1]. However, these arrays can cost thousands of dollars, take weeks for delivery, and the individual oligonucleotides are limited to 200 bases. Therefore, they are better suited to applications where one needs to generate very large numbers of clones.

The availability of the new gBlocks Gene Fragments means that the lab can now order custom, high-fidelity, synthetic DNA that is affordable and ideal for studies where oligo arrays would have been impractical. 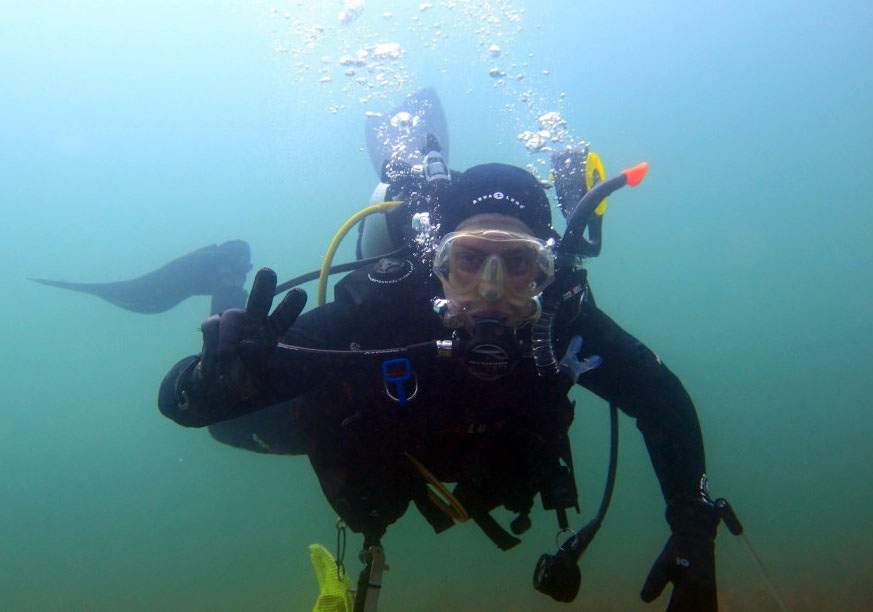 Dr Francois Vigneault is a postdoctoral fellow at Harvard Medical School in Boston, MA. He received his BS in microbiology at Université Laval in Québec City and, subsequently, his MSc and PhD in Molecular and Cellular Biology from the same institution, while completing 10 years of service as an Officer in the Canadian Navy. He is currently working in the laboratory of Dr George Church, focusing on immune sequencing. Dr Vigneault, together with Dr Church and Mirza Citric, have co-founded a company called AbVitro, which aims to use next generation sequencing to study the immune response elicited by various diseases. They plan to use the information they gather to improve diagnostic tools and provide novel therapies.