Increase sensitivity of qPCR results with the proprietary Yakima Yellow Dye. This unrestricted fluorophore, after release from the target and separation from the quencher, is highly fluorescent and ready for detection.

Yakima Yellow dye is one in a family of fluorophores—known collectively as the Freedom Dyes—offered by IDT. Since our Freedom Dye program offers license- and royalty-free dyes, you have the assurance that your sequences can be screened in research mode, then easily transitioned to diagnostic or commercial application use, without the requirement for additional licensing.

Alternative to VIC® and HEX dyes

Originally developed as an excellent alternative to VIC and HEX dyes, Yakima Yellow dye yields ultra-bright results when compared to HEX or ATTO™ 532 (Figure 1), and provides a better spectral match to VIC dye (Figure 2). The excitation and emission wavelength of the Yakima Yellow dye is 525 nm and 549 nm, respectively, and so it emits in the yellow-orange part of the visible spectrum. 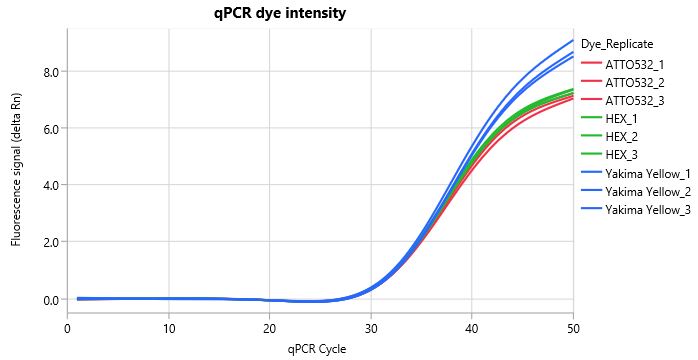 A clear advantage of Yakima Yellow dye is that it can be used readily in combination with other dyes for multiple readouts within a single reaction. For example, Yakima Yellow dye is paired with FAM in the rhAmp™ SNP Genotyping System to allow discrimination of 2 different alleles. Similarly, Yakima Yellow dye may be used in multiplex gene expression studies, using this dye on one PrimeTime® qPCR Probe with compatible dyes on other probes (for assistance, visit the PrimeTime Multiplex Dye Selection Tool).

Using Yakima Yellow dye on common qPCR platforms, such as those from Bio-Rad or Applied Biosystems, will not normally require any additional calibration. Incorporating this VIC alternative into your qPCR assay workflow can be instantly advantageous through its ultra-sensitive spectral profile and versatility as an unrestricted dye.

Business to business products and services