An alternative method for human sex-typing

Citation summary: Identifying the sex of a biological sample is conventionally determined via PCR amplification of amelogenin genes. In this study, Maxeiner, et al., investigate the validity of sexing using neuroligin-4, an autism-associated gene, and present an alternative method using the rhAmp SNP Genotyping System.

Determining the sex identification of a sample is an important part of a broad range of research areas. Human forensic analysis, animal genetics research focused on strategic livestock breeding, and labs that use mouse models for all kinds of biological research all benefit from sex identification based on DNA. For decades, sex identification had been based on the presence of the SRY gene found on the Y chromosome using PCR. Unfortunately, the absence of the SRY gene does not guarantee that the sample is female, and these experiments utilizing SRY lack an internal control. Use of the amelogenin genes (AMELX/Y) for sex differentiation appeared to solve this problem, since they are localized on both the X and Y chromosomes. Neuroligin-4 (NLGN4X/Y) has similar properties, appearing on both sex chromosomes, highlighting this genes potential for use in sex identification.

PCR is the conventional method of choice for sex identification. When genes like NLGN4X/Y contain multiple mutations, standard PCR may not be sufficient to distinguish between the 2 gene copies. The rhAmp™ SNP Genotyping System overcomes the challenge of many polymorphisms by using blocked primers to minimize non-specific amplification. The 3' end of rhAmp primers incorporate a blocking group that prevents extension unless cleavage and de-blocking occur by RNase H2 enzyme. RNase H2 enzyme recognizes this RNA base only if it is hybridized to its perfect complement, initiating primer cleavage and activation (see figure). 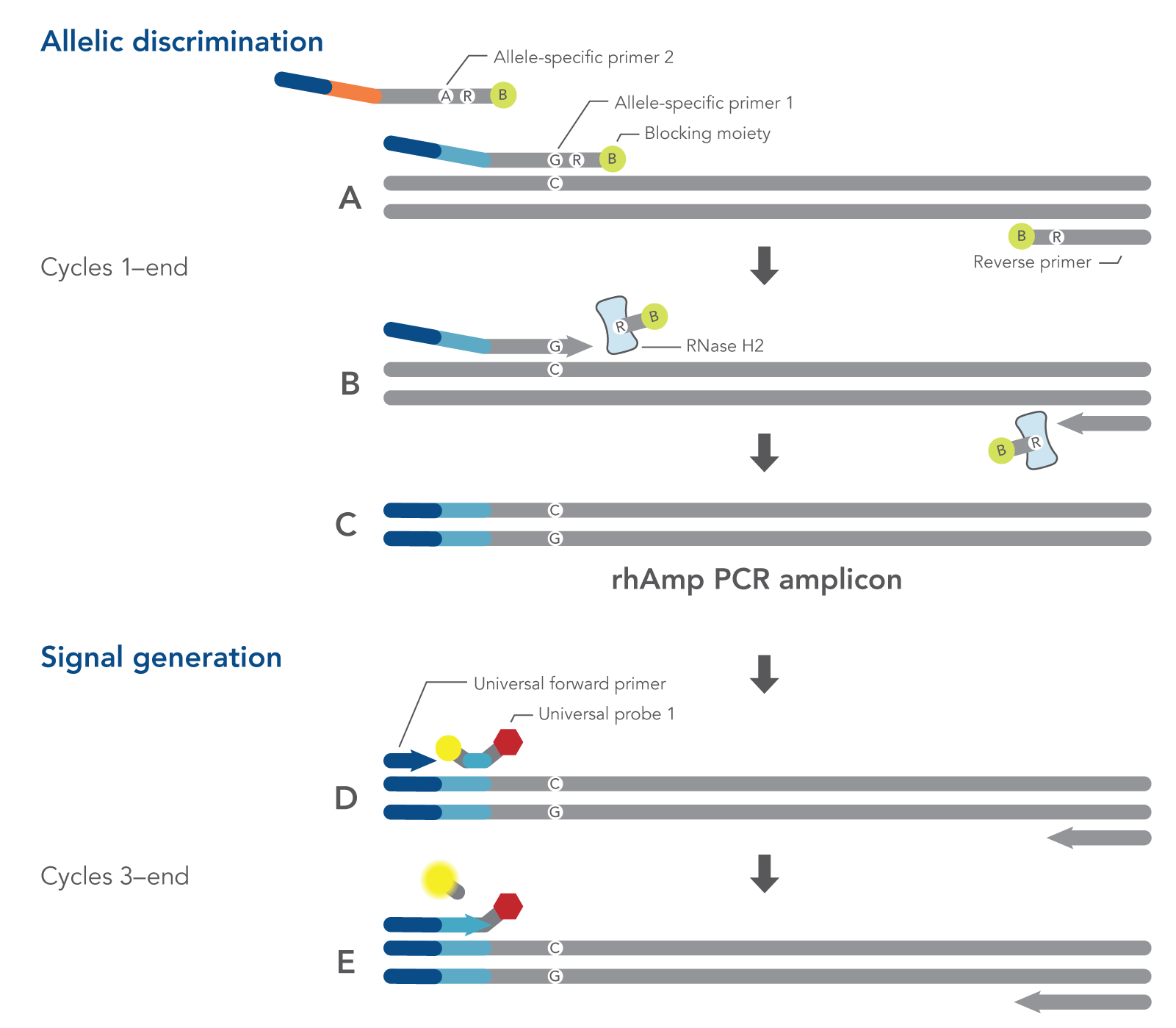 Schematic representation of a rhAmp SNP Genotyping PCR cycle. All components needed to measure both alleles are combined in a single reaction before cycling. (A) Both allele-specific primers query the SNP locus. (B) RNase H2 enzyme cleaves the primers that are perfectly annealed to the target sequence, removing the RNA base and 3′ blocking modification, which allows extension by the IDT Taq Polymerase. (C) During the first 2 amplification cycles, a tail sequence is incorporated into the amplicon that is subsequently recognized by a universal, probe-based reporter system. (D and E) Polymerase extension leads to degradation of the probe and signal generation.

For conventional PCR to distinguish between the sexes, the sequence may not contain ambiguous bases that might inhibit primer annealing, and the 2 alleles, X and Y, must be distinguishable on an agarose gel using electrophoresis. Unlike conventional PCR, the rhAmp SNP Genotyping System allows for variations in sequence.

To test whether NLGN4 could be used for sex identification using conventional PCR, Maxeiner, et al, targeted an indel region immediately upstream of the start codon. Since NLGN4X (381 bp) is almost twice as long as NLGN4Y (187 bp), conventional PCR can be used to distinguish between the 2 alleles using agarose gel electrophoresis.

The researchers focused on single nucleotide polymorphisms (SNPs) when testing NLGN4 using the rhAmp SNP Genotyping System. All 3 of the assays designed by the rhAmp Genotyping Design Tool successfully identified NLGN4X. One assay was able to separate samples into clusters to distinguish between both sex alleles.

This study is the first to investigate rhAmp genotyping as a method of sex identification. The rhAmp SNP Genotyping System was able to identify the samples’ sex at the same rate as the conventional PCR assay but includes the advantage of scaling. The rhAmp SNP Genotyping System can be scaled up to include multiplexing and allow high-throughput screening. The polymorphisms in NLGN4X/Y were valid markers for distinguishing between the sex alleles. These genes could be used in conjunction with, or as an alternative to, other sex-specific gene pairs like AMELX/Y. The rhAmp SNP strategy could be applied to these other sex-specific gene pairs as well.