Lab tips: Learn how you can use double-stranded DNA to produce longer genes of up to several thousand base pairs. No restriction sites are needed, and the approach is beneficial for assembling constructs that contain modular elements, such as antibodies.

Assembly PCR, using synthetically derived DNA, is a flexible technique for producing novel gene sequences. Single-stranded oligos or a mix of single- and double-stranded DNA are used to produce longer genes of up to several thousand base pairs. The approach can also be beneficial for assembling constructs with modular elements, such as antibodies.

Assembly PCR is also interesting because overlapping sequences can be joined without the need for restriction sites, and one can take advantage of robust PCR reagents and methods. However, because assembly PCR usually involves putting together many short fragments, experiments require careful planning and substantial optimization to be successful. There are several protocols available that use PCR methods and reagents to assemble genes. This article focuses on a two-step approach by Xiong et al. [1–3] (see below, Two-step assembly—how it works). However, most of the considerations are also applicable to other assembly PCR protocols.

Overall flexibility and the low cost of standard oligonucleotides make assembly PCR seem like an easy choice for gene construction. However, there are several considerations that make the technique, in practice, more challenging. In addition to design and logistics factors, the success of assembly PCR is affected by the same factors that affect regular PCR.

Oligonucleotide characteristics. GC content, secondary structure, and repetitive sequences can affect annealing, amplification, and cloning, so some sequence optimization may be necessary for successful assembly. In many cases, this can be accomplished following existing knowledge and guidelines for PCR. Use the free IDT OligoAnalyzer™ Tool to quickly analyze the DNA ends for these properties.

PCR conditions. Reaction conditions can be optimized for assembly PCR. Adjusting DNA, dNTP, Mg2+, and enzyme concentrations may be helpful, and inhibitors of PCR, such as chelators and organic solvents, should be avoided.

Sequence errors. Another concern with assembly PCR is that a subpopulation of the synthetic oligonucleotides contains small errors that arise during synthesis. The low rate of these errors in quality oligonucleotides is typically not an issue for PCR amplifications because the vast majority of amplified products will be correct. However, for assembly PCR, the statistical probability of one or more of these errors showing up in the final sequence increases with the number of oligos assembled, as well as the lengths of oligos used.

Including a proofreading DNA polymerase in the PCR will reduce the introduction of additional errors. In addition, sequence errors due to oligonucleotide starting materials can be mitigated by using special, high-fidelity oligonucleotides. While IDT Ultramer™ Oligonucleotides (up to 200 bases) can be used for smaller constructs, we recommend using IDT gene fragments, such as gBlocks™ Gene Fragments, gBlocks HiFi Gene Fragments, or eBlocks™ Gene Fragments, for gene assembly. IDT gene fragments can reduce sequence errors and eliminate the need to assemble and clone smaller fragments in the first assembly step, as described next.

Step 1. Single-stranded oligonucleotides, 60–120 nt, designed with short overlapping sequences, are assembled using PCR reagents into approximately 500 bp sequences. The assembled, now double-stranded fragments are then subcloned into a plasmid vector and sequenced. In fact, for genes <1 kb, this first stage assembly should be sufficient for complete synthesis. However, when directly combining multiple short oligonucleotides into sequences >1 kb, the chances of random errors in the final construct increases.

IDT offers numerous high-fidelity fragment solutions that can replace the first step in this two-step assembly PCR approach—gBlocks, gBlocks HiFi, and eBlocks fragments are synthetic, linear, double-stranded DNA that is ready to clone using a variety of methods. If your construct is 3000 bp or less, you can order a gene fragment. Since IDT Gene Fragments offer the same sequence flexibility as oligonucleotides, but at a much higher fidelity, they can be used to completely replace the ~500 bp, Step 1 assemblies. This provides a substantial savings in time and money spent designing, assembling, and sequencing the Step 1 sequences. Simply order the desired sequences on our website and several days later you can expect to receive the ready-to-use DNA fragment.

Step 2. For constructs >1 kb, a second round of assembly is used to join error-free, 500 bp, subfragments that were subcloned and identified by sequencing from the first round of assembly. For this step, the double-stranded elements must also contain overlapping sequences at their termini. The subcloned sequences are isolated from the plasmid either by PCR or restriction digest—PCR using a high fidelity polymerase is typically recommended because it eliminates the need to include restriction sites in the design. The double-stranded subfragments are joined in a second round PCR reaction to create the desired larger sequence, and included primers amplify the construct. This second step of assembly is followed by another round of cloning and sequencing (Figure 1). 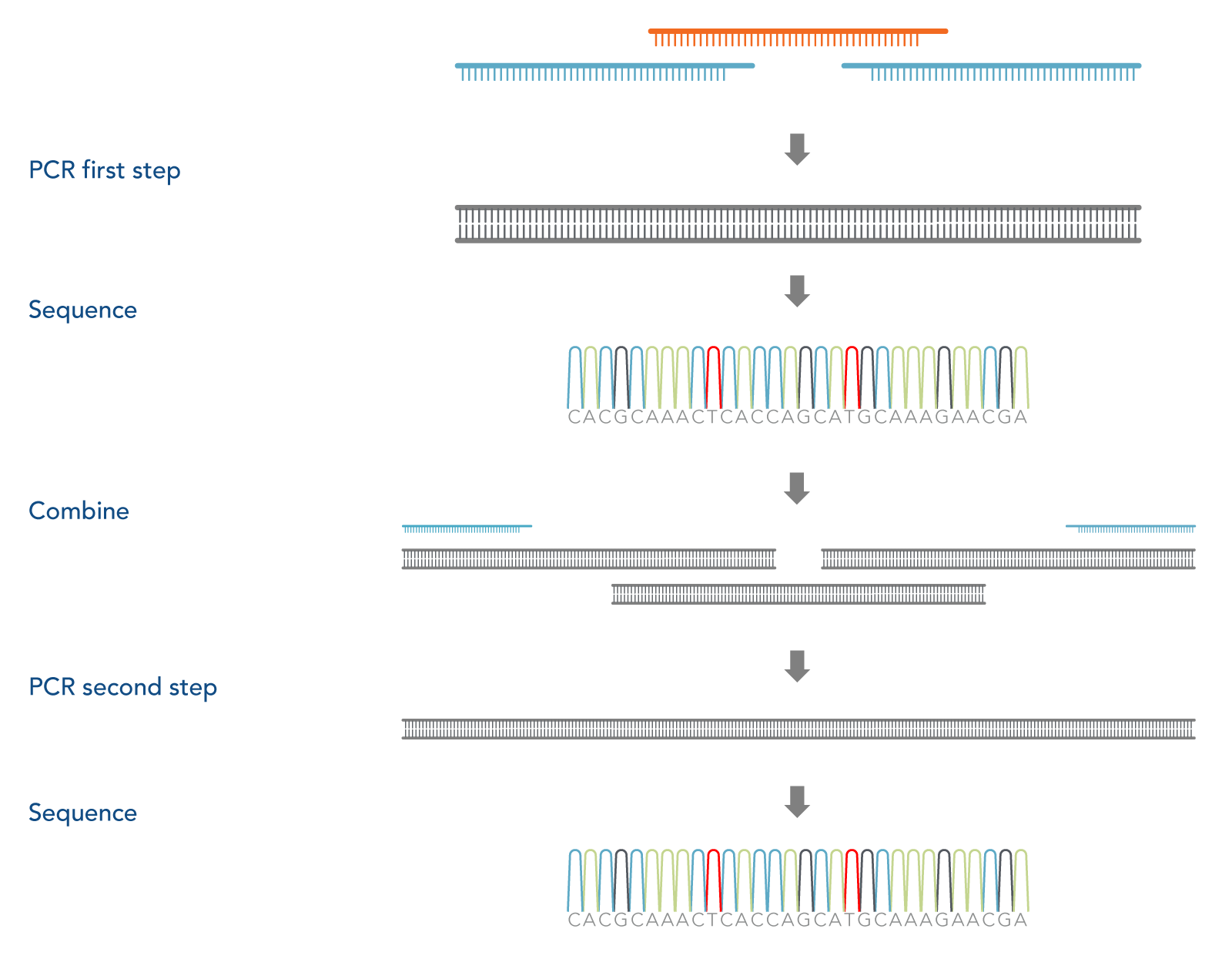 Figure 1. Two-step assembly PCR. Step 1: Oligonucleotides with overlapping sequences (approximately 20 bp and with similar Tm) are assembled into double-stranded DNA (500–1000 bp in length) using PCR. These fragments are then subcloned and sequenced. Inserts from clones with the correct sequence are isolated by PCR amplification (recommended) or restriction digest. Step 2: The double-stranded components are combined, along with amplification primers that will amplify the entire desired construct assembled in a second round of PCR. The products are then cloned and sequenced, yielding the final construct.

The advantages of this approach are that the 500 bp fragments from the first step are easy to clone and sequence, and only subfragments that are 100% accurate are used for assembling into larger gene constructs.

The disadvantages to this two-step assembly PCR approach are:
1. Large assemblies still involve combining large numbers of oligonucleotides in the first round of assembly
2. Time-consuming and expensive cloning and sequencing must be performed after both the first and subsequent rounds of assembly to obtain the final construct.

Gene fragments from 125−3000 bp shipped plated or in suspension and ready for use.