Research profile: Read about how the 2015 Ben-Gurion iGEM team used a CRISPR-Cas9 transactivation system to develop a highly specific cancer targeting tool, with both diagnostic and therapeutic potential.

CRISPR-Cas9 tools are revolutionizing genome editing, but the easy genomic targeting of Cas9 also has great potential for non-editing applications. It is now common to read about use of recombinant dCas9 variants with inactivated nuclease activity. By conjugating dCas9 to other proteins, it is possible to create Cas9 transcription activators, repressors, or fluorescent tags that can be used to target sequences throughout the genome for purposes other than gene modification [1]. The Ben-Gurion University (BGU) iGEM overgrad team used a variant of dCas9 conjugated with a VP64 transcription activator, derived from herpes simplex virus, to develop a cancer targeting system. 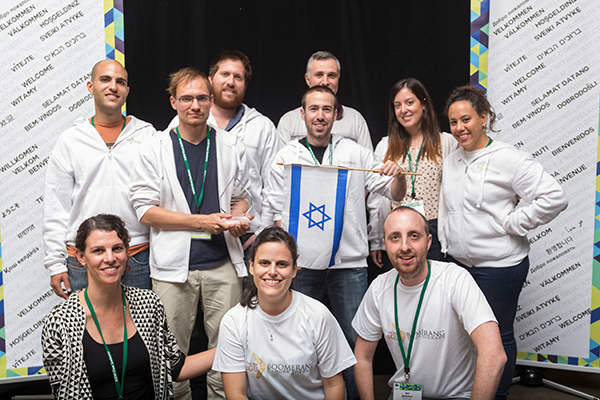 The 2015 Ben Gurion University iGEM overgrad team. 2015 was the third year that BGU participated in the International Genomic Engineering Machine (iGEM) competition. In two previous iGEM competitions, the BGU teams were mentored by Prof Smadar Cohen. In 2015, Prof Cohen recruited Dr Efrat Forti and Dr Emil Ruvinov from her lab to assemble and advise the team. In addition to these 2 advisors, the team was composed of 8 students from different departments, including MD-PhD student Shoham Rigbi.

The Boomerang project began with an idea from one of the medical students, Ori Zelichov, who was interviewing to join the team. During his medical training, he observed that many cancer treatments are not specific to cancer cells. He suggested the team develop a tool that would distinguish cancer cells, and either kill the cancer cells or express a reporter that could improve other clinical procedures. The team called their project “Boomerang” because it turns phenotypic features that typically promote survival of cancer cells against the same cells for therapeutic purposes.

The team says that their greatest challenge was designing the Boomerang system. After much research and discussion, they settled on 3 core components. The first 2 components would be a dCas9-VP64 recombinant protein and the CRISPR guide RNA necessary to guide that protein to its targets. To ensure that the system would only target cancer cells, the team used promoters for telomerase reverse transcriptase (hTERT) and enhanced survival (human survivin)—characteristically activated only in cancer cells—to activate transcription of the dCas9-VP64 and guide RNA components. This means that their system requires 2 signals to turn itself on, increasing the likelihood that it will only be active in cancer cells.

The third component of the system was left undefined by the team. Instead, they propose that the VP64 activator of their dCas9-VP64 can be used to produce a variety of outcomes, including expression of a reporter system to help doctors see cancer cells, expression of a mechanism to kill the cancer cells, or some other useful mechanism that can be tailored to the clinician’s or researcher’s needs (Figure 1). The project resulted in awards for Best Health and Medicine Project and Overgrad Grand Prize 1st Runner–Up in the 2015 iGEM competition. They were also awarded Best New Basic Part, and were nominated for Best Part Collection. 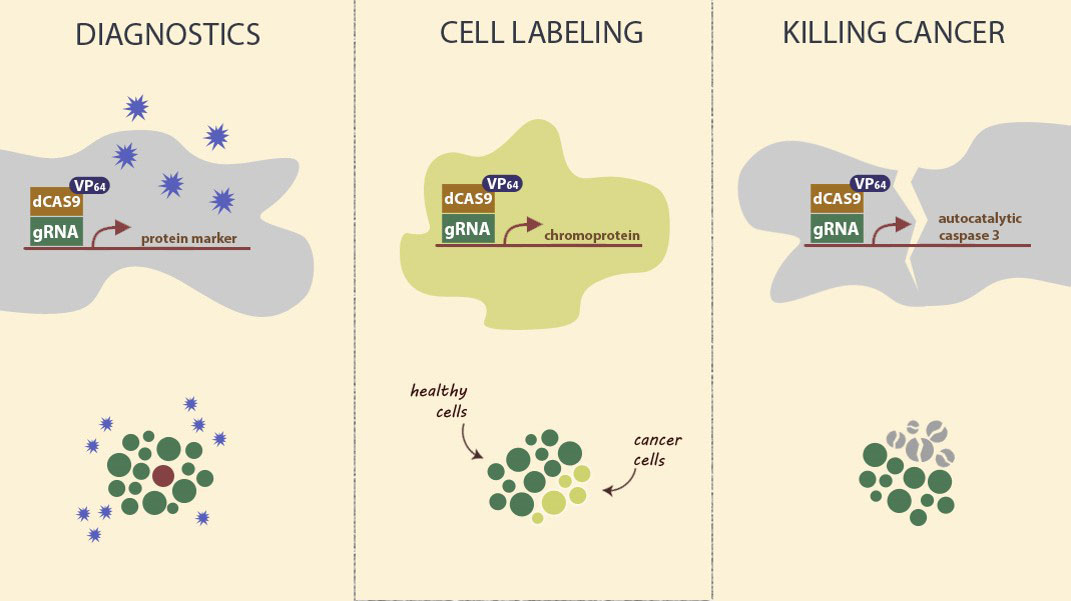 Figure 1. Possible applications for the Boomerang CRISPR cancer system. The Boomerang system expresses a dCas9-VP64 transcription activator and requisite guide RNA only in cancer cells. Use of the VP64 transactivation domain means that the system can activate a variety of downstream mechanisms as shown.

iGEM teams have access to varying levels of resources, but they typically have very limited budgets. In 2015, IDT offered iGEM teams up to 20 kb of sequence-verified gBlocks Gene Fragments for use in their projects. gBlocks Gene Fragments are double-stranded DNA of up to 2 kb in length that are perfect for gene assembly. The team used gBlocks fragments to synthesize various BioBrick components (functional DNA sequences contained within a plasmid vector that conform to iGEM restriction-enzyme assembly standards for modular assembly) needed for the Boomerang system. The ability to simply order these BioBrick constructs, rather than synthesize them in the lab, saved the team critical time, allowing them to focus on other aspects of their project, including executing their proof-of-concept experiments. The team emphasizes the great experience they had working with the local IDT distributor in Israel, Synthezza Bioscience, which accompanied them from the design to synthesis and cloning processes.

Most iGEM teams have only 7–8 months at most to work on their projects. They typically spend time during the academic year planning their projects, and scramble to do the lab work over the summer. The competition strongly emphasizes collaboration, both within and between teams, and includes numerous awards for achievements from excellent science and strong collaboration ethic, to best presentation skills, and software and Wiki site design. The competition is also intended to be fun and, even for teams that do not win awards, it provides these young students with excellent real life experience in independent research, collaboration, and presentation.

Considering the short duration and fast pace of the iGEM competition, the rewards beyond the competition can also be quite remarkable. Work on the BGU project has led the team to apply for a patent on their design and, following the competition, the students are discussing how to complete additional experiments to support its application. The team has also been recognized for its achievements beyond iGEM—by Ben-Gurion University and in national television and radio news programs. All of this occurred for these young researchers, most of whom had little to no prior research experience, in less than one year. Similar stories are told by other teams, and this educational aspect of the program underlines the influence of the iGEM competition.

However, perhaps the most important thing about the iGEM competition is the individual accomplishments. Team member Shoham Rigbi, who presented Team Ben Gurion’s project to more than 2700 people, will now return to her normal studies, taking the lessons and encouragement of this amazing experience with her. Dr Forti, now completing her postdoctoral studies, recalls how much she enjoyed this opportunity to mentor the team through this incredible experience. And, as with all remarkable experiences, iGEM is unlikely to be forgotten by anyone who has the opportunity to take part in it.