Reducing our reliance on fossil fuels

Synthetic biology can be used to design living factories, capable of producing chemicals previously attainable only through expensive extraction or the use of petrochemicals and other non-renewable resources. Amyris, an industrial synthetic biology company located in Emeryville, California USA, has developed genetic engineering and screening technologies that enable them to modify the way microorganisms process sugar. By controlling these metabolic pathways, they are able to design microorganisms, primarily yeast, and use them as living factories in established fermentation processes to convert plant-sourced sugars into target molecules, including pharmaceuticals, biofuels, polymers, flavors, and fragrances (Figure 1). Amyris considers this technology to be “disruptive” because of its ability to change the current landscape where consumers are increasingly dependent on fossil fuels on a daily basis. 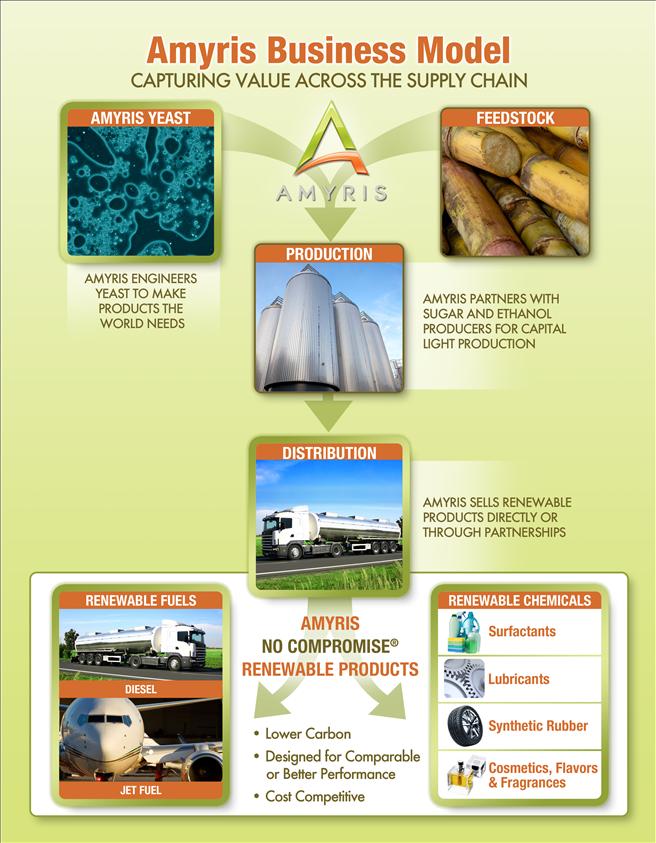 A renewable replacement for diesel

Amyris initially developed its core technology on a non-profit project concentrating on the sustainable, stable, microbial based production of the anti-malarial drug artemisinin [1], and is now applying its industrial synthetic biology platform to provide alternatives to a broad range of petroleum-sourced products. Amyris has focused its development efforts on the production of a class of isoprenoids to deliver a renewable alternative to petroleum-sourced fuels and chemicals. Its initial commercial production is focused on Biofene®, Amyris’ brand of renewable trans-ß-farnesene, manufactured using Amyris-engineered microbes in fermentation of plant-sugar feedstock. Biofene is a liquid, long-chain renewable hydrocarbon molecule that can be easily adapted to serve as an alternative to fossil fuel–derived products across a number of markets.

Amyris’ farnesene can be used as is or modified to provide other renewable ingredients in a diversified product slate including sulfur-free renewable diesel, surfactants used in soaps and shampoos, fragrance oils as flavors and fragrances, emollients used in cosmetics and personal care, industrial and automotive lubricants, or a variety of other useful chemicals. For example, the farnesene C-15 molecule with 4 double bonds goes through a single chemical finishing step that hydrogenates the double bonds yielding the end product, farnesane, which performs just like diesel under various testing conditions. Over 200 public buses have run on a blend of Amyris’ renewable diesel for over 10 million kilometers.

Renewable farnesene provides a number of compelling advantages when compared to petroleum-based oils and fuels. It’s tailored-made pure hydrocarbon. It’s biodegradable and non-toxic. It doesn’t yield sulfur and it has lower emissions than fossil fuels.

In order to enable the rapid development of strains capable of producing these No Compromise® products, Amyris has invested heavily in developing a high throughput pipeline that allows for the rapid, parallel testing of thousands of hypotheses. Dr Sunil Chandran, the Head of the Automated Strain Engineering (ASE) group at Amyris, described to us how the company researchers use this process to build thousands of bacterial and yeast strains per month in order to produce the vast array of Amyris’ target molecules. The pipeline makes use of robotics, efficient molecular biology techniques, an extensive DNA parts bank, and custom, in-house designed software that translates biologists’ genotype requests, assembles the DNA elements, and tracks all of the parts.

In order to efficiently assemble the different DNA parts, Amyris has developed a patented system called Rapid Yeast Strain Engineering (RYSE) that relies on incorporating DNA linker pairs at the ends of every DNA part, enabling the use of multiple assembly methods to stitch them together (Figure 2). Attaching these linkers to the ends of the DNA results in the generation of a library of modular parts that can interchangeably be used with one another thereby facilitating the testing of diverse libraries. Every DNA fragment that is built—promoters, selectable markers, up- and downstream homologous sequences, and the genes themselves—is cloned and stored away in a freezer, creating a “bank” of DNA parts with sequences of known function and activity, avoiding the need to remake the same part again. The proprietary software, custom built by Amyris programmers, enables any Amyris employee to enter an idea in the form of a genotype. The program then translates the genotypes into the DNA assemblies and DNA parts needed, checks for the assemblies and DNA parts in the bank, and designs oligos if the DNA parts are not present in the bank. The software determines the exact parts and order of assembly reactions required, and manages the robotics that carry out the 1000−1500 assemblies and transformations the team performs every 3 weeks.

All strains built at Amyris are then sent off to the High-Throughput Screening (HTS) group where they are assayed for a variety of target molecules. Despite their level of sophistication, the strain construction and screening pipelines still require capable, talented scientists to run the pipeline, analyze data, maintain high QC standards, control for variation, and develop cutting-edge tools to continuously improve the process. 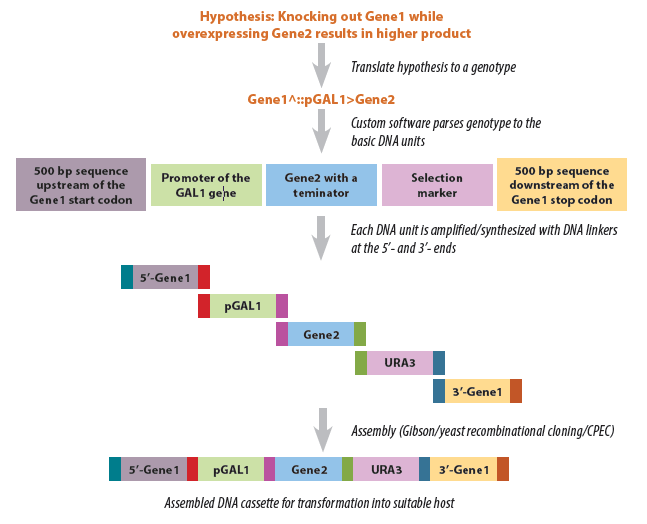 When new DNA parts are required—for example, an isoprenoid synthase from another organism that needs to be ported over to E. coli or S. cerevisiae—the team used to just have the codon-optimized gene synthesized by a third party vendor, but this often took weeks. At Amyris, time is extremely critical and is one of the major criteria they use to evaluate purchase of outside products. So the team turned to IDT gBlocks® Gene Fragments. “gBlocks Gene Fragments allow us to get our hands on novel genes or other DNA parts in less than 1 week. We are really good at assembling the DNA in house, so ordering gBlocks fragments and then assembling them ourselves accelerates the testing of these new DNA parts,” says Dr Chandran.

Up to 3 kb, double-stranded, sequence-verified genomic blocks, designed with 30−50 bp sequence overlaps, are combined 3−6 fragments at a time, with terminal primers, using PCR. “The method works really well,” notes Dr Chandran. “We have never had a problem putting the gBlocks fragments together.” These functional DNA parts are then further assembled, often in combination with other genes, resulting in DNA assemblies 2−25 kb long, which are then integrated to create a new bacterial or yeast strain. Even though they might be knocking out just 1 gene in the host strain during the integration, they may still be integrating multiple genes into the given locus. When putting together these larger assemblies, the group often uses yeast recombinational cloning—transforming the DNA parts (some of which might be gBlocks fragments) into yeast with a shuttle vector containing ends that overlap the ends of the terminal DNA parts.

The ASE pipeline at Amyris is agnostic to the final product. Amyris’ high-throughput processes create and test thousands of yeast strains daily in order to choose those strains that are most efficient and scalable. There is a constant feedback loop between the laboratory, where strains are initially created, modified, and screened at small scale, and the two Amyris pilot plants, where engineers expose those strains to conditions that simulate a commercial production environment. This leads to selection of strains that will efficiently scale. “We believe that our ability to rapidly go through this design-build-test cycle reduces the time to market for any product we target,” notes Dr Chandran. The field of synthetic biology is in the early days of standardizing unit operations across strain engineering and the ASE platform represents a step in the industrialization of strain construction. 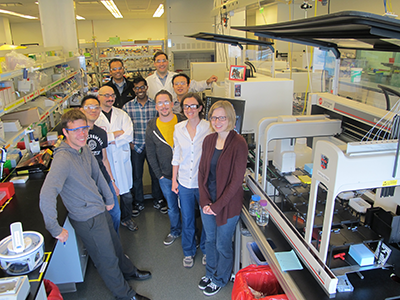 Dr Sunil Chandran (standing at back in blue jacket) is an organic chemist with an MS degree from The Indian Institute of Technology in Mumbai, India, and a PhD from Michigan State University, East Lansing, MI, USA. This was followed by a postdoctoral fellowship in biochemistry at the University of Wisconsin, Madison, WI, USA. After his fellowship, Dr Chandran focused on the development of polyketide drugs at Kosan Biosciences (Hayward, CA) for several years. In 2006 Dr Chandran joined Amyris, when the company was just 1 year old. He now serves as the Head of Automated Strain Engineering.