Clustered Regularly Interspaced Short Palindromic Repeats (CRISPRs) are sequences that serve as an adaptive defense ("immune") systems in bacteria and archaea. Learn how scientists have coopted this natural mechanism for targeted gene editing or removal. This article also describes some of the early applications for which this technology is being used.

CRISPRs (Clustered Regularly Interspaced Short Palindromic Repeats) are sequences found naturally in bacteria and archaea that are part of an adaptive defense mechanism. CRISPRs, in conjunction with CRISPR associated (Cas) proteins, are able to recognize and cleave complementary DNA sequences, protecting the cells from foreign sequences [1].

Following the discovery of CRISPRs, it was shown that the S. pyogenes Cas9 nuclease could be directed to cleave specific DNA sequences when used in conjunction with a small CRISPR associated RNA (crRNA) and a separate transactivating RNA (tracrRNA). The crRNA contains a target-specific protospacer of 20–40 bases, and a repeat motif that is recognized and bound by the tracrRNA. The crRNA is processed so that the protospacer recognizes 20 bases of the target sequence, which must also contain a protospacer adjacent motif (PAM) [2].

The PAM sequence is not included in the guide RNA sequence, but is found next to to the target sequence on the non-target strand. The GG bases of the PAM site are recognized by a major groove interaction with Cas9 [2, 3]. When the crRNA and tracrRNA come together, they direct Cas9 to DNA sequences that are complementary to the protospacer, and Cas9 creates a double-stranded break (DSB) [2].

Figure 1 shows how the CRISPR/Cas9 system can be used to create a DSB at a sequence-specific target site. More recently, it has been shown that Cas9 can be targeted to desired gene locations in a variety of organisms, from E. coli to humans, with a chimeric single-guide RNA (sgRNA) that contains both the crRNA and tracrRNA elements [4,5]. 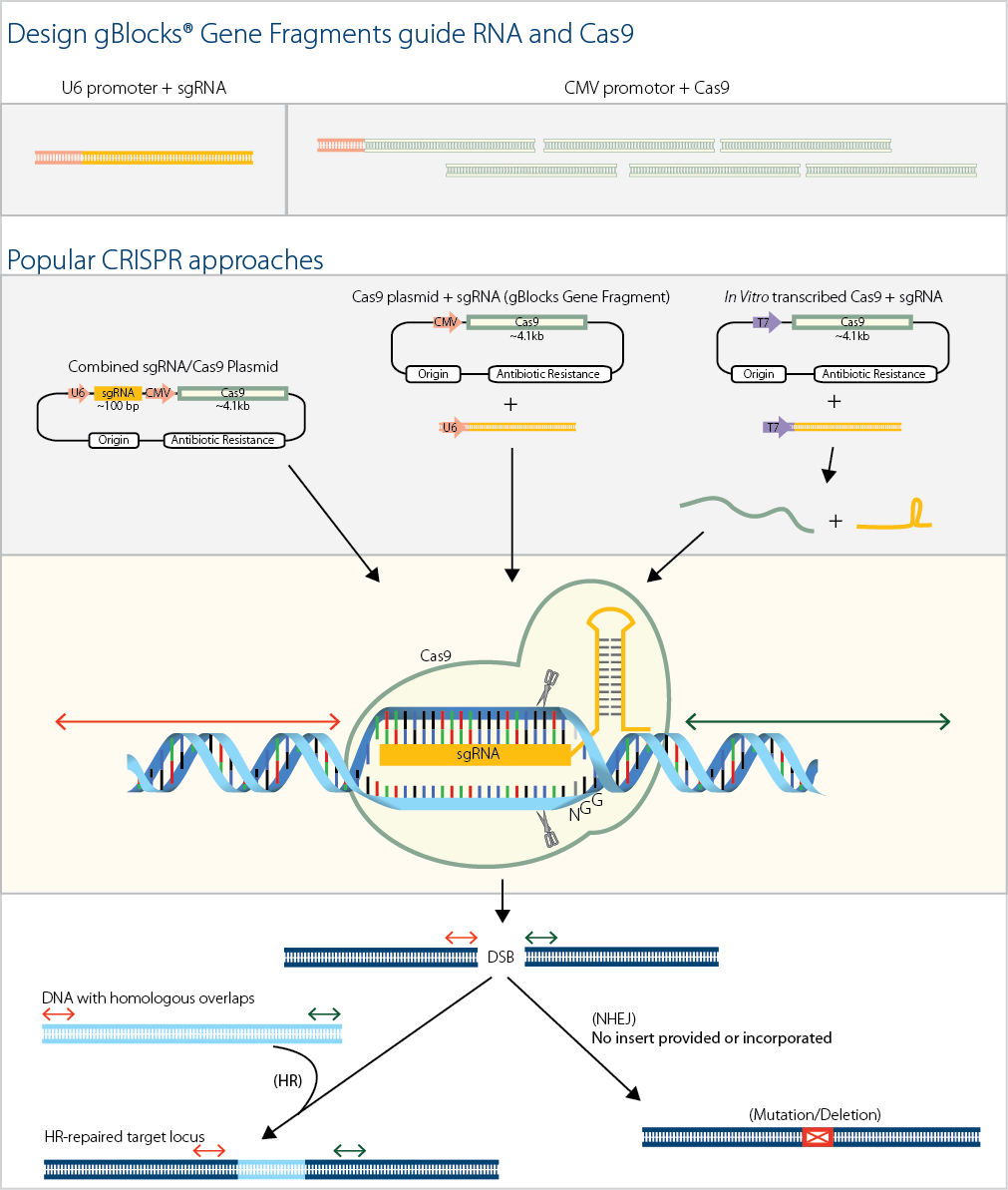 Figure 1. Examples of CRISPR/Cas9 designs using gBlocks Gene Fragments. The tracrRNA and crRNA required to guide Cas9 to a target sequence can be combined into a chimeric sgRNA (yellow). The sgRNA, including a U6 promoter, can be ordered as a single gBlocks Gene Fragment. The ~4.1 kb, S. pyogenes Cas9 sequence can be codon-optimized and assembled from 6–7 gBlocks Gene Fragments, depending on design (green). Single plasmid, plasmid-Cas9 + gBlocks sgRNA, and in vitro RNA translation are some of the methods used to introduce CRISPR/Cas9 elements into cells. Cas9 creates a double-stranded break (DSB) 3 bases from the NGG sequence that makes up the PAM site of S. pyogenes. Note that the PAM site is not included in the sgRNA, but must be present in the target. S. pyogenes Cas9 recognizes the two GG bases of the PAM sequence, on the non-target strand, by means of a major groove interaction [3]. DSB repair will produce a deletion by non-homologous end joining (NHEJ) in most cases. Mutations or insertions can be created by homologous repair (HR), by adding a donor sequence that has homologous overlaps to the DSB site—typically 100–1000 bp of overlap is used.

In most eukaryotic cells, the DSB created by Cas9 is repaired by non-homologous end joining (NHEJ), which results in small deletions or insertions that disrupt genes where the break occurred. This mechanism can be used to achieve gene silencing at the genome level. Alternatively, in some cells, and in presence of donor DNA that contains homologous overlaps with DNA on either side of the DSB, endogenous DNA repair mechanisms can integrate “foreign” DNA into the cell’s genome by homologous recombination. The ability to introduce foreign sequences at specific genomic loci can be used to obtain targeted changes to genes or add genes or molecular pathways to genomes by incorporating synthetic sequences [5,6].

Most importantly, the CRISPR/Cas9 system is relatively easy to implement compared to other editing approaches as a means to create either targeted gene disruptions in a variety of organisms and cell types, or to insert sequence changes to targeted genomic regions [4].

Improving the accuracy of Cas9

One of the reported limitations of the CRISPR/Cas9 system is that it can also recognize sequences with up to 5 mismatched bases, especially at the 5′ end of the target sequence. This means that off-target effects may occur at a rate higher than other methods of genome editing [6,7,8].

A potential solution to increase specificity of CRISPR induced changes has recently been demonstrated independently by the labs of Dr George Church at Harvard University and Dr Feng Zhang at Massachusetts Institute of Technology. By altering the amino acid sequence at 1 of the 2 catalytic sites within Cas9, they have created Cas9 mutants that nick only 1 strand of DNA per sgRNA target. Using this Cas9 “nickase”, DSBs can only be made by creating 2 targeting CRISPR complexes with 2 independent sgRNAs. Each sgRNA is designed to recognize a sequence in close proximity to the other, one targeting the sense and the other the antisense strand of the desired genome location. The dual specificity of this method is thought to greatly reduce the off-target effects [9,10]. Other yet to be identified Cas9 improvements, or enzymes from sources other than S. pyogenes may further improve the overall efficacy and/or specificity of the system.

A Cpf1-based genome editing system is also available for use with AT-rich sequence situations.

Several research publications describe how scientists have taken advantage of the sequence and application flexibility of IDT gBlocks Gene Fragments to explore CRISPR and Cas9 function. The custom-made, synthetic gBlocks Gene Fragments have been used to create codon-optimized versions of Cas9, constructed for efficient expression in various host cells [5,6,11]. It is also simple to make variants, such as the Cas9 nickases described by the Church and Zhang labs, or to add motifs like nuclear localization signals that direct translated Cas9 enzyme into the nucleus for genome targeting.

Along with the various Cas9 constructs, chimeric sgRNAs also need to be generated. Typical sgRNA designs are ~150 bp in length, and a complete design that includes a human U6 promoter can be made with ~450 bp of DNA sequence, which means these can be easily ordered as a single gBlocks Gene Fragment, making them ideal for generating synthetic sgRNAs quickly and inexpensively [5,9,11]. The sgRNA constructs and promoter can then be cloned into an expression vector, introduced directly into cells, or in vitro transcribed into RNA. Figure 1 illustrates some popular CRISPR/Cas9 designs that can be generated using gBlocks Gene Fragments.

Including the Cas9 and sgRNA on the same plasmid simplifies the experimental procedure, while keeping the sgRNA and Cas9 separate has the advantage of allowing tight dosage control of these individual components. Choosing the correct construction method for your experiments will depend on the specific aims of your research design. In addition to controlling dosage, the duration of the Cas9 and sgRNA can be regulated by using in vitro transcribed RNA for transfer into cells. While DNA is relatively stable when transfected or injected into cells, transcribed RNA is quickly degraded, meaning that the CRISPR/Cas9 elements will be short-lived. Their short lifespan ensures that the artificial constructs will not be incorporated into genomic DNA and passed on to daughter cells [12].

This article was originally published in 2013. It contains useful general information about CRISPR and genome editing. However, it does not reflect the development of CRISPR tools such as the IDT Alt-R® CRISPR-Cas9 and Alt-R CRISPR-Cpf1 Systems, which provide improved efficacy and ease of use, reduced off-target effects, and a quicker route to publication. Learn more about Alt-R here.