Not all CRISPR-Cas9 systems are equal

Learn how the use of different formats for CRISPR guide RNAs can lead to different genome editing outcomes. The optimized, short RNA oligos that make up Alt-R CRISPR-Cas9 crRNAs and tracrRNAs outperform other CRISPR guide RNA formats. In addition to their improved editing efficiency, these short RNA oligos do not incorporate into the target genome, providing cleaner editing results by avoiding a common problem associated with DNA constructs.

CRISPR-Cas9 genome editing uses the bacteria-derived Cas9 endonuclease to generate double-stranded breaks in DNA. The cleaved DNA is then repaired by non-homologous end joining (NHEJ) or homologous recombination, resulting in a modified sequence. When selecting CRISPR-Cas9 reagents, there are several options with different advantages and disadvantages, depending on the experiments you will perform. One of the potential disadvantages you should consider when selecting a CRISPR method, especially for gene disruption by NHEJ, is that the CRISPR guide RNA format can change the outcomes within the targeted site(s).

Guiding the Cas9 endonuclease to genomic DNA targets is relatively simple compared with other genome editing tools, such as TALEN or zinc-finger nuclease approaches. Unlike with those methods, the Cas9 enzyme does not need to be engineered for every unique sequence. Instead, Cas9 relies on association with short CRISPR RNA (crRNA) and transactivating CRISPR RNA (tracrRNA) molecules to recognize target sequences. Target sites must also contain a protospacer adjacent motif (PAM) immediately downstream of the crRNA recognition sequence. This PAM sequence is a short NGG motif and it must be on the non-targeting strand (Figure 1). These short RNAs are easy to synthesize using standard chemical and molecular techniques, and this simplicity is the main reason why CRISPR-Cas9 genome editing has quickly become the dominant gene editing method.

As shown in Figure 1, for each specific target site, Cas9 requires a separate crRNA and tracrRNA that are annealed to each other through homology domains to form a crRNA:tracrRNA guide complex. Alternatively, the crRNA and tracrRNA can be effectively combined with a short linker loop into a chimeric single-guide RNA (sgRNA), which is widely used by many labs [1, 2].

Figure 1. Types of CRISPR-Cas9 guide RNA. (A) Wild-type S. pyogenes CRISPR systems use a separate crRNA and tracrRNA. The crRNA and tracrRNA sequences used in the Alt-R® CRISPR-Cas9 System mimic those found in S. pyogenes, and have been length-optimized for performance and easy manufacturing. (B) Another common approach is to combine the crRNA and tracrRNA into a fusion sgRNA by adding a short linker sequence between the components. For both guide types, the cleavage site is specified by the protospacer element within the crRNA (thick green bar).The crRNA and tracrRNA form a complex with the Cas9 endonuclease to guide Cas9 and activate the endonuclease for cleavage of genomic DNA. In addition to the protospacer element, all targets for S. pyogenes Cas9 require a short NGG protospacer adjacent motif (PAM) immediately downstream of the target sequence on the opposite strand. Cleavage will not occur at sites lacking this PAM sequence. Double-stranded cleavage typically occurs 3 bases from the PAM site in the target sequence.

Among the methods for producing CRISPR guide RNA, DNA constructs that express the RNA are convenient and easy to work with. However, when double-stranded DNA is used for NHEJ gene disruption, it can leave a molecular footprint at the genomic target site.

We used Sanger sequencing of PCR amplicons to evaluate the editing efficiency of CRISPR-Cas9 transfections, and cataloged the types of mutations generated by different Cas9 trigger types. The pie charts in Figure 2 show that when sgRNAs are introduced as DNA expression constructs—as either plasmid (Figure 2C, 2D) or gBlocks Gene Fragment constructs (Figure 2B)—we observed more multiple-base insertions. Furthermore, these insertions regularly included a footprint in the form of several hundred inserted nucleotides that corresponded to large sections of the expression cassette. Scientists using expression cassette sgRNAs need to consider that the DNA template can be integrated into the double stranded break and become part of the genome of their organism.

In contrast, Figure 2A shows that single-stranded RNA oligonucleotides produce fewer multiple-base insertions. Furthermore, these RNAs cannot be incorporated into genomic DNA. For most applications, avoiding the incorporation of the artificial CRISPR constructs is a preferred outcome, which is one reason why we use RNA oligos to manufacture the CRISPR RNAs for our Alt-R CRISPR-Cas9 System. 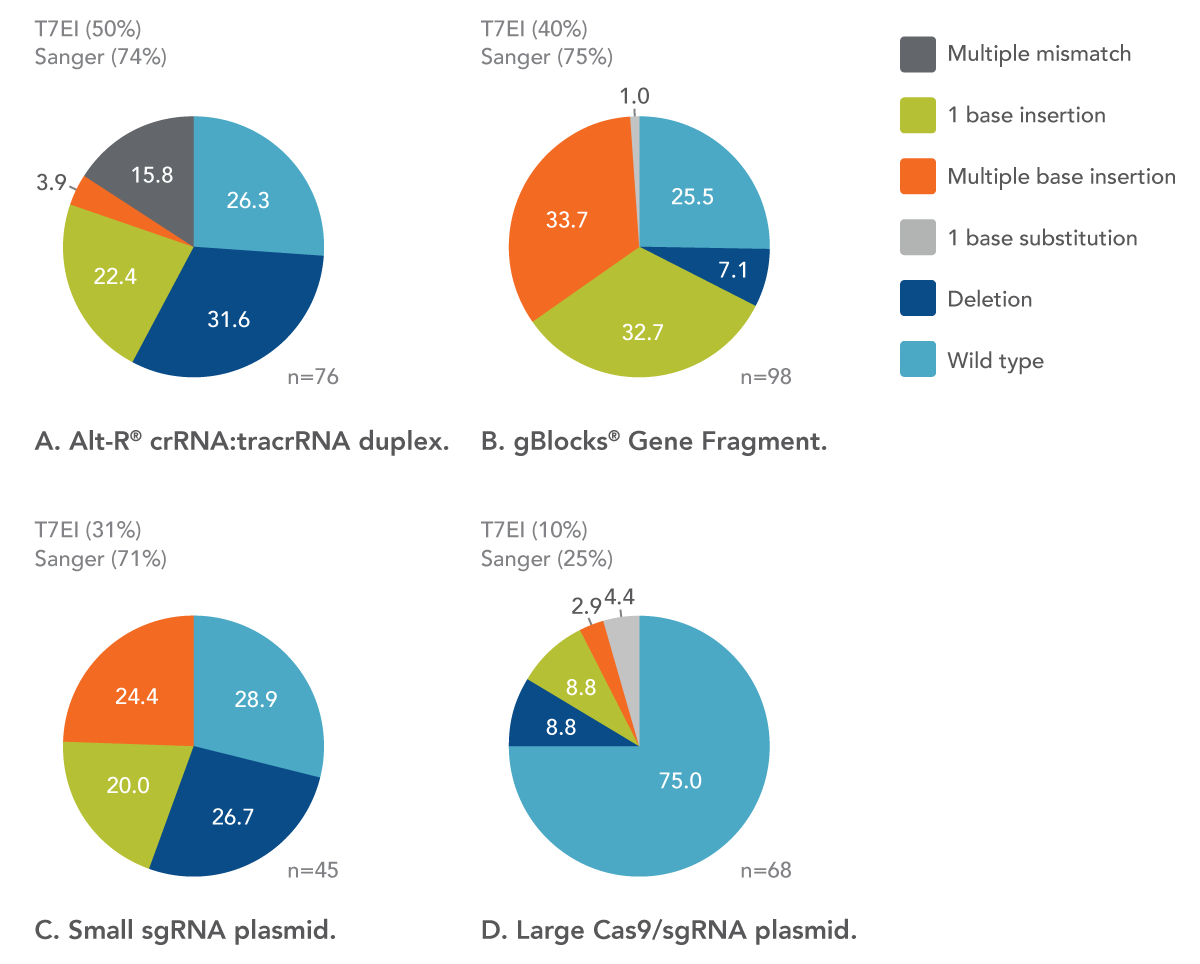 Detection of mutations with mismatch endonucleases

Just as there are many ways to edit the genome, there are many ways to assess the editing results. Mismatch endonucleases such as T7EI and Surveyor endonuclease are cost effective and easily adapted for high throughput screening of CRISPR genome editing. Mismatch endonuclease assays for either T7EI or Surveyor endonuclease are very similar. Both enzymes require PCR amplification of the edited DNA, followed by formation of heteroduplexes between mutant and wild-type DNA. These mismatched products are then incubated with the endonuclease, which recognizes and cleaves only the mismatched DNA, and results can be visualized by electrophoresis. However, in order to use this approach, it is important to understand what the assay limitations are and how to interpret your results.

Compared to sequencing, enzymatic mismatch analysis methods reflect a lower than actual editing efficiency. This is because the mismatch cleavage enzymes do not efficiently cleave every type of mismatch and, as we have discussed, CRISPR genome editing produces a mix of insertions and deletions. Generally, T7EI cleaves deletions more effectively, and it is not as sensitive to PCR buffer conditions as Surveyor endonuclease. However, T7EI does not detect single-base changes as well as Surveyor endonuclease [3].

IDT uses T7EI in our screening and the Fragment Analyzer capillary electrophoresis instrument (Advanced Analytical) to quantify our results. Figure 2 shows that our T7EI assays resolved ~50% of the mutation frequency that was seen by Sanger sequencing. Analysis of the sequencing data shows that single base changes are common in NHEJ repairs, and those are typically missed by T7EI. Based on these results, when we analyze our own T7EI data, we consider editing event values of ≥20% to be good performance, and we reasonably expect that Sanger sequencing data would show 40–50% actual editing events for the same samples.

The Alt-R CRISPR-Cas9 System is the product of extensive research, including testing of common methods for generating the crRNA and tracrRNA complex. These studies led us to use shortened crRNA and tracrRNA components of 36 and 67 nt, respectively, in the Alt-R CRISPR-Cas9 System, compared to the natural S. pyogenes 42 nt crRNA and 89 nt tracrRNA. This format has the advantage of producing edits without incorporation of artificial CRISPR constructs, as described in this article, and the Alt-R CRISPR-Cas9 System outperforms other CRISPR guide technologies in overall performance. Finally, affordable crRNAs and the ability to purchase bulk quantities of highly purified tracrRNA also make the system ideal for making crRNA libraries and/or for high-throughput studies. See more data and download protocols at www.idtdna.com/CRISPR.