Cloning by PCR amplification can sometimes lead to unwanted deletions in a proportion of the resulting clones. Learn steps you can take to avoid such events and increase the odds of generating correct clones.

Occasionally, researchers using oligonucleotide primers to PCR amplify a sequence for cloning find deletions (usually the same, single base) present in multiple clones sequenced. The precise mechanism for these deletions is unknown; however oligonucleotide synthesis does not appear to be the cause. Instead, evidence suggests the issue is related to the cloning step, and only under certain conditions: 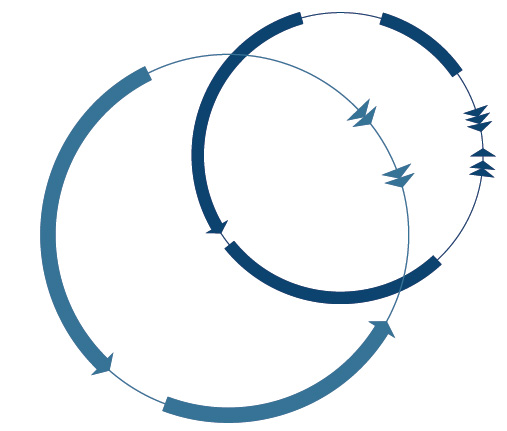 While there are no clear rules that predict when and where such errors will occur, the deletions tend to occur near ligation sites in areas of high secondary structure, particularly at the ends of predicted hairpins that close loop structures, and at the termini of short sequences identical to those in the E. coli genome. However, these may not be the only regions that produce deletions. We have also observed that two identical plasmid vectors containing nearly identical sequences may behave differently; one may generate the required clone while the other consistently generates clones containing deletions.

Though the reasons for such deletions are unclear, these errors can sometimes be reduced or eliminated when cloning is switched to a cell line engineered to reduce recombination events. Site-directed mutagenesis can also frequently correct the deletion error. IDT provides a free Mutagenesis Application Guide that can help with this approach.

There are steps you can take to increase the odds of generating correct clones. Our primary suggestion is to change one or more of the cloning products used in your protocol. The two components we recommend altering are the competent cells and plasmid vectors.

Competent cells. Use a competent cell line that has some of the bacterial recombination genes knocked out, such as Invitrogen’s Stbl3 line. This cell line limits errors that may be introduced when some sequence motifs are transformed into bacterial cells.

Plasmid vectors. Vectors that are designed to facilitate cloning of unstable DNA sequences are also available. These include the small pSMART® vectors (Lucigen), and some low copy vectors, such as the pBAD family of plasmids. Changing both the cell line and plasmid with these factors in mind can further limit bacterial induced changes.

Identifying why a particular sequence does not properly amplify and clone can be difficult. While these suggestions do not guarantee that the cloning will be successful, they can improve the success rate. IDT offers technical support that ranges from free consultation to complete gene synthesis solutions.

Feel free to contact us at applicationsupport@idtdna.com if you need further assistance.