Learn how Ubiquitome, Battelle, and IDT are developing a rapid qPCR Ebola virus test for easy use in the field. The PrimeTime qPCR assay is designed to be run on Ubiquitome’s hand-held, battery powered real-time PCR device, the Freedom4.

The 2013–2015 Ebola epidemic in West Africa began in a remote village in late December 2013 but was not identified until March 2014 [1]. In the 14 months since the Ebola outbreak was identified, approximately 26,750 people were suspected or confirmed to have contracted the Ebola virus disease (EVD), and more than 11,000 people have died from the infection [2].

It can be difficult to distinguish EVD from other infectious diseases, such as cholera, malaria, typhoid fever, and meningitis. While current diagnostic tests are accurate, they are time-consuming and complex. They also create challenges related to sample storage and transportation, laboratory biosafety, and staff expertise in performing the assays. Having access to simple, rapid, and accurate viral testing in remote villages would be extremely useful for quelling this epidemic as the number of new cases decreases, and will be important for detecting future outbreaks. With this goal in mind, Dr Paul Pickering (Ubiquitome Limited, Auckland, New Zealand) is spearheading a project to develop an RT-qPCR assay used with the Freedom4 device, a portable PCR machine.

From bench tops to handhelds

PCR experiments, which can be run in a few hours, have quickly improved our understanding of basic biology and increasingly, provide rapid, accurate testing in molecular diagnostic applications. Along with application development, there have been refinements to the polymerases, primer designs, and thermal cycling machines. The next big step in the evolution of PCR thermal cyclers—a handheld, battery-operated qPCR instrument called Freedom4 (Figure 2)—was announced by Ubiquitome Limited in September 2014. 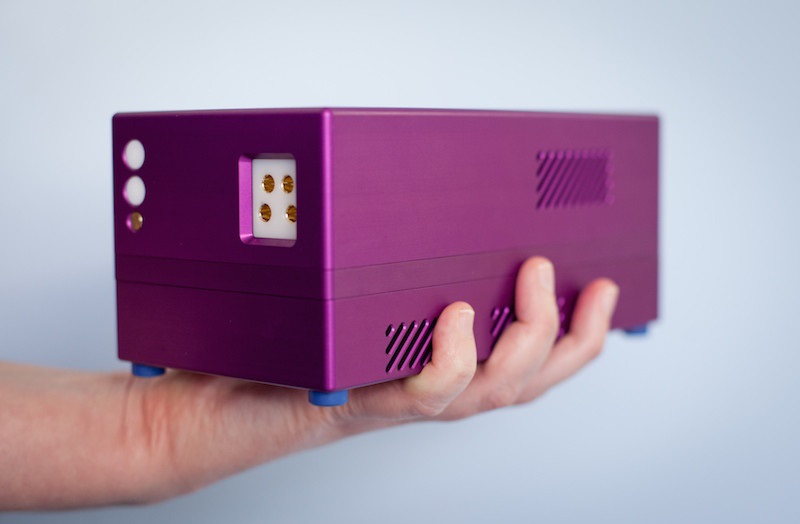 Figure 2. The Freedom4 device. The instrument processes 4 reactions (sample plus negative, positive, and extraction controls) in approximately 1 hour and is controlled by an iPhone or laptop. It uses laser-based optics that are configured to excite fluorescent dyes at 473 nm and detect emission signals in the range of 510–600 nm, making this instrument compatible with fluorescent-based assays, including either SYBR® Green (used in intercalating dye assays) or FAM fluorescent dyes (used in 5′ nuclease probe-based assays).

Figure 3. The Ebola PrimeTime qPCR Assay is 98.9% efficient. The Zaire ebolavirus-specific qPCR assay is a PrimeTime 5′ Nuclease Assay that includes a ZEN Double-Quenched Probe (IDT). Replicate HeLa cell total RNA samples were spiked with 106 to 101 copies of a Zaire ebolavirus RNA fragment (green) in vitro transcribed from gBlocks Gene Fragments (IDT) using the MEGAshortscript and MEGAclear Kits (Life Technologies). All samples were run in triplicate on a BioRad CFX384 using a one-step RT-PCR protocol. PCR efficiency was calculated as 10-1/slope-1. The No Template Controls (NTC) are shown in blue, and the –RT reactions (input sample: 106 copies of Ebola RNA in HeLa cell RNA) are shown in dark red. (Data courtesy of IDT, Scott Rose and Kristin Beltz.)

Additional results from Battelle showed that the sensitivity of this assay is comparable when run on the Freedom4 and a traditional, bench-top PCR system (Table 1). Based on an unpaired t test, there was no significant difference in detection of 1000 copies and 500 copies/reaction (P values of 0.3331 and 0.2058, respectively) between the 2 instruments. In addition, in tests of human blood samples spiked with different viral RNAs, the assay had high specificity for Zaire ebolavirus and did not amplify 2 other Ebola virus strains or 5 other viral pathogens known to be present in Africa (Table 2).

Table 1. Sensitivity of the Ebola PrimeTime qPCR Assay is comparable when run on the Freedom4 device and a bench-top, diagnostic PCR instrument. Zaire ebolavirus RNA was obtained from BEI Resources (NIAID, NIH) and diluted in water. Dilutions of this RNA were tested with the Ebola PrimeTime qPCR Assay (45 PCR cycles) on either the Freedom4 device or the QuantStudio DX system (Life Technologies). Using an unpaired t test, there was no significant difference in detection of 1000 copies/reaction and 500 copies/reaction (P values of 0.3331 and 0.2058, respectively) between the two machines. Cq = Quantification cycle; NTC = No template control; No amp = No amplification; SD = Standard Deviation. (Data courtesy of Battelle, Brian M Taylor, Sean M Gregory, April M Brys, and David H Moore.)

The goal of point-of-care diagnostic testing is to help stop disease transmission, especially in remote locations, and to facilitate improved patient outcomes. The Freedom4 device eliminates the need for sample preservation and transportation to a laboratory-based testing facility. The instrument can simply be brought to remote locations for use during time-sensitive, public health situations [3]. The Freedom4 and the PrimeTime Ebola qPCR Assay are being submitted to the US FDA for Emergency Use Authorization.

Dr Brian Taylor, Research Scientist in the Biomarkers Services Group at Battelle (Aberdeen, MD, USA), has more than 19 years of experience in immunology, cell and molecular biology, virology, microbiology, and assay development. Prior to his work at Battelle, he managed the µQUANT core facility (Institute of Human Virology [IHV], University of Maryland, School of Medicine, Baltimore, MD, USA), which provides an extensive range of services, including immunochemical assays, cell and virus stock preparation and characterization, cell culture based assays, protein/antibody production and purification, and quantitative PCR. Before joining the IHV, Dr. Taylor worked on methods for creating, propagating, and assaying viral vectors used in gene therapies for cardiac rhythm-associated diseases. Dr. Taylor earned a BS degree in biology from Hampden-Sydney College (Hampden-Sydney, VA, USA) and his PhD in microbiology and immunology from the University of Maryland (Baltimore, MD, USA), where he investigated the altered tropisms associated with mutant envelopes of the human immunodeficiency virus type-1 (HIV-1) and the mechanism by which these viruses enter target cells. 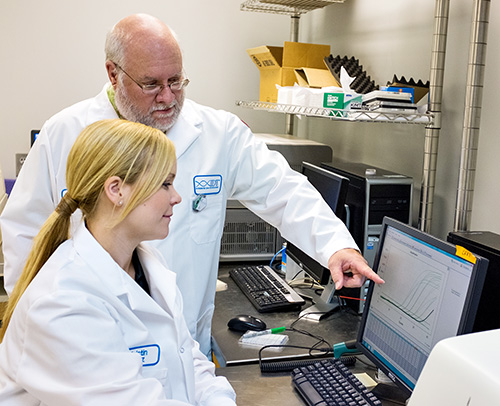 Kristin Beltz, Research Assistant III, studied at the University of Iowa (Iowa City, IA, USA), where she earned her BS in biology with a focus in cell and developmental biology. She joined IDT in 2007 and has been a key member of the synthetic biology team that developed methods of synthesizing long oligos, for example, Ultramers® Oligonucleotides, and gBlocks® Gene Fragments and Libraries. Currently, her main focus is oligo-based assay designs using RNase H2 technology and the development of enzymes and reagents for molecular biology.