DNA methylation is an epigenetic mechanism that can regulate gene expression through several cell divisions, and even be heritable, without altering the underlying nucleotide sequence (see the sidebar, DNA methylation in vertebrates). A small but significant proportion of all CpG islands become methylated during development, and when this happens the associated promoter is stably silent. Thus, methylation provides a means for non-genetic factors to influence gene behavior. Environment, diet, stress, and aging are all factors that can cause changes in DNA methylation patterns. Some of these changes in epigenetic patterns are necessary, e.g., those involved in normal cellular differentiation; but they can also be detrimental, such as those that occur in many forms of cancer

DNA methylation: From the whole genome to specific gene regions

Zymo Research Corporation, The Epigenetics Company (www.zymoresearch.com), provides kits and reagents for studying DNA methylation and hydroxymethylation patterns. We recently talked with Zymo Research Scientist, Jill Petrisko, whose research focuses on region-specific DNA methylation, such as that of promoter elements, where methylation changes can be diagnostic for diseases like cancer. Distinct DNA methylation patterns in the promoter regions of those genes may lead to changes in their expression. These analyses can be informative for classifying pairs of samples with distinct gene expression patterns for a certain set of genes, e.g., tumor suppressors in tumor and adjacent normal tissue.

The company introduced the OneStep qMethyl™ DNA Methylation Quantification Kit as a simple way to examine region-specific DNA methylation using methylation-sensitive restriction enzymes (MSREs) and probe-based qPCR. The method does not measure the individual methylation status of each CpG (as in bisulfite sequencing), but rather provides an average DNA percent methylation for that particular region covered by the amplicon.

This information can be sufficiently instructive for researchers screening and validating candidate biomarkers for future clinical application, for example. Furthermore, the MSRE and real-time PCR method is a quick and inexpensive means for researchers with a background in real-time PCR to analyze DNA methylation differences in a specific subset of genes or CpG islands within specific promoters; thus, avoiding whole genome sequencing.

Genomic dsDNA is digested by restriction enzymes that cleave unmethylated cytosines in the DNA. Where cytosines contained in specific restriction sites are methylated, the sequence remains intact. Real-time PCR is then used to amplify regions containing these CpG sites, and the sizes of the amplicon fragments recovered determine the average methylation state.

Intact, methylated regions show high levels of amplification, whereas amplicons containing unmethylated cytosines at those specific restriction sites show late amplification, essentially as noise due to small amounts of nonspecific primer binding, as with the No Template Control sample. Figure 1 provides a more detailed description of the procedure and the formula used to calculate percent methylation. 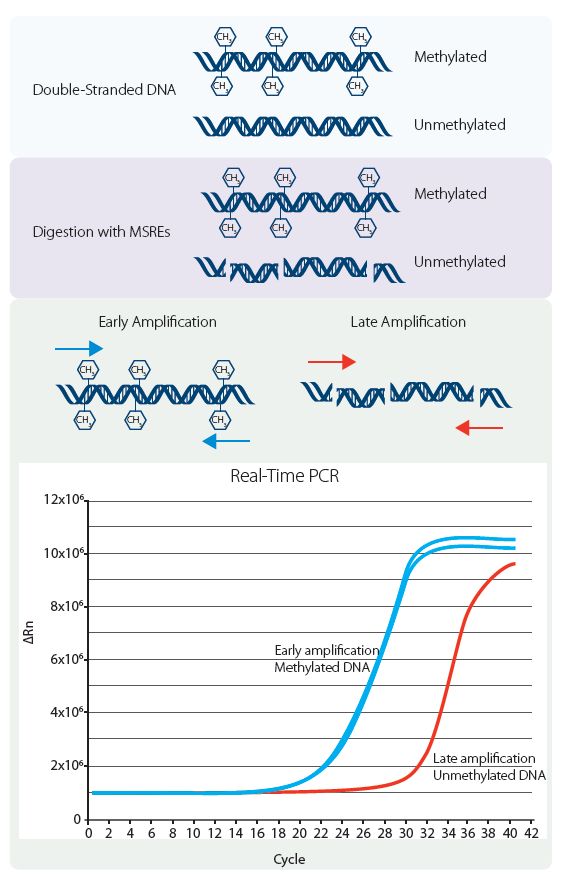 Zymo Research offers both a fluorescence-based singleplex system (the SYTO9) and a version of the procedure for use with a probe for multiplexing. A major advantage of using the probe-based system is that it provides a higher level of specificity, such that unmethylated amplicons will be amplified much later, thus providing better discrimination between methylated and unmethylated fragments than traditional methylation sequencing.

Primer design is crucial, of course, and Dr. Petrisko relies on the free online IDT PrimerQuest Tool for this. Custom IDT PrimeTime qPCR Assays have also worked well. “We pretty much get all of our primer and probe qPCR assays from IDT. We use the mini scale PrimeTime qPCR Assays with FAM. I love those, because for a minimal investment I can try them out to make sure they work before investing in the next fluorophore to add to a multiplex assay, ” notes Dr. Petrisko. “In fact, I have successfully multiplexed 5 of the PrimeTime qPCR Assays to amplify DNA methylation markers for stem cell pluripotency.”

Use of genomic methylated and non-methylated standards, available from Zymo Research, provides a method to quantify methylation on a global level. For specific gene regions of any species, the company uses IDT gBlocks Gene Fragments to obtain double-stranded sequences that are completely unmethylated, and which can then be custom methylated.

“We came across gBlocks Gene Fragments because we use IDT for all of our primer and probe needs, and are on the IDT website so much. The gBlocks fragments not only serve as interesting controls, but they make creating standards, especially for unusual species, so much easier. We don’t need to obtain or waste customer samples; if they can send us the sequence, we can start designing assays for them. The gBlocks fragments are also clean enough that they do not require purification. They save us a lot of time—they are great,” noted Dr. Petrisko.

Zymo Research keeps their approach for evaluating methylation simple. The company provides a Custom OneStep Service where they help researchers localize and design appropriate qPCR assays to use in the system “…since, really, everyone has their own personalized set of targets they are interested in,” says Dr. Petrisko. The custom service allows them to tailor assays to each researcher’s specific set of promoter regions and the DNA methylation in those regions.

The custom service along with the OneStep qMethyl Kits are a great way for researchers to explore differentially methylated regions in the genome as a first step, before moving to targeted sequencing or another method that requires bisulfite conversion of the DNA.

Vertebrate DNA methylation typically occurs at sites of CpG sequence in the genome when DNA methyltransferase converts cytosine to 5-methylcytosine (Me-CpG). CpG methylation results in reduced transcriptional activity and, thus, is a mechanism for regulating gene expression. In human DNA, approximately 80–90% of CpG sites are methylated. However certain GC-rich regions known as CpG islands—made up of approximately 65% CG residues—may contain no methylated bases. These CpG islands are associated with the promoter elements of all constitutively expressed genes and more than half of all human genes as a whole. 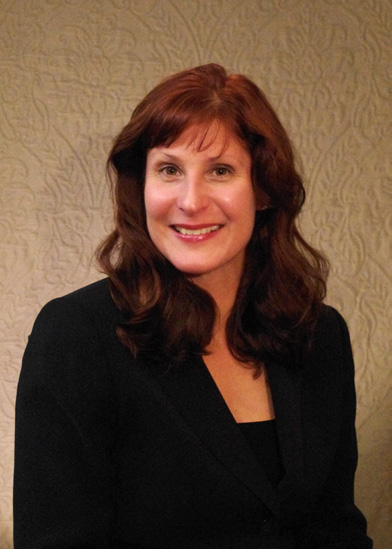 A molecular biologist by training, through her MS at University of Nebraska (Lincoln, NE, USA), PhD at Idaho State University (Pocatello, ID, USA), and postdoctoral positions in Idaho and Australia, Jill Petrisko studied the genomic DNA organization and RNA gene expression of plant, fungi, and bacteria, providing her with a diverse background in many organisms.

Joining Zymo Research as a research scientist in 2011, Jill still holds on to her academic focus and takes advantage of the opportunities in this position to interact with university researchers who are doing methylation studies. She particularly enjoys helping customers troubleshoot their experimental challenges. Zymo Research Corporation is a privately held biotechnology company located in Irvine, CA, USA, that provides the highest quality epigenetics products and services in addition to DNA and RNA purification products. The company’s philosophy is to provide the most innovative, quality products while ensuring they are both simple and reliable to use.