Back in April, 2015, Dr Donald Lawrence was on the IDT website ordering oligonucleotides for a promoter pull down assay when he saw the ad for “Oligo Delivery by Drone”. At first he was very skeptical noting, “If Amazon can’t do this, no way IDT can do it. And I personally don’t like the idea of drones flying around, dropping packages on people.” But there was this button that said, <Find out if we can deliver to your area>, and Lawrence was intrigued, so he clicked it.

Lawrence had forgotten it was April 1st that day. Clicking the button took him to a screen that clarified this ad was an April Fools’ Day joke, but also provided a chance to win the drone pictured in the ad. Dr Lawrence signed up…

A postdoctoral fellow in the Pathology Department at Saint Louis University (St Louis, MO, USA), Dr Lawrence studies the Natural Killer Lytic-Associated Molecule or NKLAM, an E3 ubiquitin ligase that was first discovered by his mentor and laboratory PI, Dr Jacki Kornbluth. The enzyme adds ubiquitin onto proteins, a function that appears to be critical to the tumor killing activity of certain immune cells, such as NK cells, cytotoxic T cells, and macrophages (see Natural Killer Cells and NKLAM, below). The laboratory has developed an NKLAM knockout mouse that, in the absence of this protein, develops an increased number of tumors and metastases. Scientists in the laboratory are focused on understanding how NKLAM functions and the signaling pathways that are involved in the defect in killing [1,2].

Dr Lawrence has shown that NKLAM is also located in macrophage phagosomes, and plays a role in macrophage anti-bacterial activity [3]. His research is focused on determining the pathway through which NKLAM facilitates this activity in macrophages. Through comparisons of wild type and NKLAM knockout mice, and with in vitro studies, he has identified involvement of the JAK/STAT pathway. This pathway is critical for the production of interferon beta (IFNβ), which augments nitric oxide synthase (iNOS) protein, both molecules with diminished expression in the knockout mice [4].

As a means of identifying transcription factors that regulate iNOS protein expression, Lawrence performs oligonucleotide pull-down assays, where short double-stranded gene promoter fragments are used to pull out these expression enhancing elements from macrophage nuclear lysates (Figure 1). He starts with 20 base, biotinylated ssDNA oligonucleotides that he then anneals and adds to macrophage nuclear lysates. 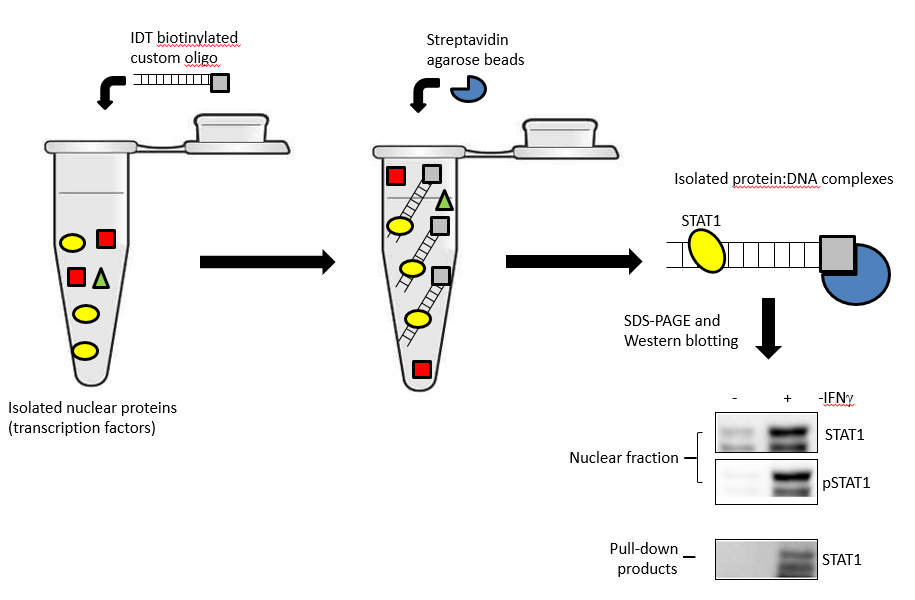 Figure 1. Oligonucleotide pull-down assay for promoter binding transcription factors. A lysate is made of isolated nuclei from bone marrow-derived macrophages (here the macrophages were activated with the cytokine interferon gamma (IFNg)). To this lysate, the IDT biotinylated custom oligo is added. The 20mer oligo corresponds to the promoter of a gene of interest; in this case the gene was inducible nitric oxide synthase (iNOS). Transcription factors bind the biotinylated oligo and these protein:DNA complexes are then isolated using streptavidin-agarose beads. The complexes are then subjected to SDS-PAGE and Western blotting, in this example, for the transcription factor STAT1. STAT1 translocates to the nucleus with interferon gamma treatment (top panel (+)) and is phosphorylated/activated (middle panel (+)). The pull down panel (bottom) demonstrates that in response to IFNg treatment STAT1 binds to the iNOS promoter. (Data courtesy of Dr Donald Lawrence, Saint Louis University.)

Dr Lawrence confided, “I don’t routinely order oligos. So I entered them manually, checked and rechecked the sequences to make sure I had entered them correctly. I also checked to see if I had the modifications positioned right, which is simple because you just click on them, and away you go. And IDT offers A LOT of modifications—I was surprised by that! Ordering the oligos was really all very easy.”

Lawrence was running one of these assays when Dave Campbell, his IDT Sales representative, stopped by the laboratory to drop off a surprise—Dr Lawrence had won the drone! Meanwhile, the oligo pull down assay worked fabulously. Dr Lawrence commented, “I got really good data out of that assay—those probes were fantastic! And we just ordered some additional control probes from you the other day. We really like your products—they’ve worked really well for me.”

As for the drone, Lawrence has already flown it a few times. Rocketing has been a minor hobby of Lawrence’s on and off since childhood. As a kid, he and his dad flew remote controlled airplanes and they would occasionally build rockets to fly together. “It’s been really fun and easy to fly the drone,” notes Lawrence. “You can fly it using your cell phone, and see what it sees in real time! And we have Forest Park here, with its huge Central Field, used for festivals and balloon races—an ideal place to take it up for a great view of the park and surrounding area.”

The Kornbluth laboratory has been using IDT products in their qPCR assays to monitor gene expression for over 3 years. “IDT has been the “GO TO” for all of our qPCR assays,” admits Lawrence. “Our research assistant does a lot of real-time PCR and gets all of her primers and probes from IDT. Synthesis and shipping is really fast, and they have always been of good quality—everything works. They are the first company that comes to mind when we need qPCR primers and probes.”

The Janus kinase (JAK) and Signal Transducer and Activator of Transcription (STAT), or JAK/STAT pathway, is a highly conserved signaling pathway common in white blood cells. It functions to transmit extracellular chemical signals through cell membranes and into the cell nuclei to affect gene expression through interaction with DNA, akin to the second messenger system. The JAK/STAT pathway is believed to help regulate immune system function, and genetic defects in the JAK/STAT pathway have been shown to result in immune deficiency syndromes and cancers.

Natural Killer (NK) cells are a small population of circulating white blood cells that are able to recognize and kill tumor cells on contact. These activities are enhanced when NK cells are activated by agents such as interleukin-2 (IL-2) and interferon (IFN), and require new RNA and protein synthesis. The Kornbluth laboratory has been cloning and characterizing genes induced by IL-2 and IFN in NK cells. Their experiments have led to the identification of the E3 ubiquitin ligase, Natural Killer Lytic-Associated Molecule or NKLAM as an essential component for NK cell anti-tumor activity. 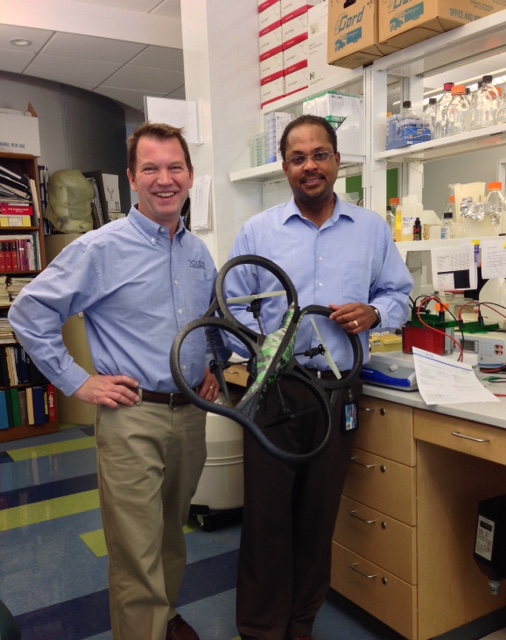 Donald Lawrence has always been on a career track in immunology. A biology major at Xavier University in Cincinnati (OH, USA), he attended a summer program at University of North Carolina (UNC), Chapel Hill (NC, USA), during which he developed his love for immune cell research. He enjoyed the summer program and location so much that he stayed there to complete a PhD in pathology. His PhD work addressed cyclic GMP and how it modulate neutrophil adhesion and spreading, after which he went on to do further neutrophil research as a postdoctoral fellow at the Center for Experimental Therapeutics and Reperfusion Injury at Harvard Medical School (Boston, MA, USA).Dr Lawrence and his wife, also a researcher, then relocated to St Louis, MO. (Currently, Dr Lawrence’s wife is an Associate Dean of Academic Quality Assurance at Webster University.) See references 3 and 4 for some of Dr Lawrence’s latest published research findings.