Using DsiRNA to map pain pathways in the CNS

DsiRNAs (Dicer-substrate RNAs) are chemically synthesized 27mer duplex RNAs that have increased potency in RNA interference compared to traditional 21mer siRNAs. Read this example of a research group using the technology for in vivo delivery to the CNS.

The problem with pain

Chronic pain significantly impacts workplace productivity and health care costs. Once patients develop chronic pain, most will experience it for the rest of their lives. Pharmacological approaches are often unable to alleviate this condition in every patient. Unfortunately, the mechanisms behind chronic pain are poorly understood. Opiates, like morphine, are among the classic medicinal treatments, but produce many side effects and often provide poor pain control. A significant proportion of the population find little, if any, relief from opiate use. As a result, elucidating the pathways that cause pain and developing new therapeutic approaches to pain relief are important initiatives within the research community.

Nicolas Beaudet works with Dr Philippe Sarret at the Université de Sherbrooke (Quebec, Canada), where they study the mechanisms of pain, investigate ways to target pain receptors, and develop analgesics that circumvent problems with opiates as they are currently used in the clinic. The laboratory’s initial pharmacological studies focused on G-coupled protein receptors which are the targets for 50% of the drug market [1]. The research team wanted a more specific way to study the mechanisms than the typical pharmacological approach and so began collaborating with IDT to explore genetic strategies for treating chronic pain [2].

One of their primary targets is neurotensin. Naturally produced in the central nervous system, neurotensin is a peptide thought to play an essential role in providing analgesia. Dr Sarret’s group began working to increase the effect of endogenous neurotensin by developing a medicinal chemistry platform to synthesize more potent drugs that target neurotensin receptors. The laboratory’s focus has evolved to more precise research on the mechanisms for how neurotensin can induce analgesia using preclinical models. In proof-of-concept experiments with rats and mice, the researchers are studying the effects of several of these new molecules.

The Sarret lab is using a unique animal platform for rodents that includes behavioral devices to detect pain. While some of their new drugs are showing improved efficiency to alleviate pain in the lab, the researchers are also pursuing a genetic strategy to understand the role of neurotensin in pain modulation. Knockout mouse systems are often used for such purposes. However, the Sarret lab wanted to avoid the distorted model that often comes with knockout systems and also wanted to be able to maintain the work in rats; they opted to pursue in vivo RNA interference (RNAi) experiments. In collaboration with IDT, they used IDT Dicer-substrate RNAs (DsiRNAs) to inhibit expression of neurotensin receptors.

Two schools of thought exist for how pain is processed. Some say that pain is only processed by the brain with the spinal cord serving mainly for relaying the nociceptive stimuli and for receiving inhibition commands. Others say that the spinal cord has its own center of command, adding to the input received by the brain. The Sarret lab is focusing on the latter and is the first lab to direct in vivo RNAi specifically to the central nervous system (CNS).

The Sarret lab provided the IDs of genes encoding known or suspected receptors involved in nociception in the dorsal root ganglia of the rat spinal cord. The IDT team generated a series of DsiRNAs for these targets and tested them in vitro using cell lines expressing the genes. During screening, several assays were developed to account for variable rates of RNA degradation following target mRNA cleavage by Ago2. A minimum of 10 DisRNAs per target assay were screened to create a compound dose response curve. The IDT team found DsiRNAs yielding target knockdown of >70% at 100 pM, and IC50 values of 3050 pM. At least 2 DsiRNAs with this potency were identified per target for subsequent confirmation of in vivo biological effects, to control for potential off-target effects (OTEs). Occasionally, reagents which are very potent in vitro show reduced potency in vivo. Some of these rare cases are under study; it is suspected that gene target site sequence may differ between live rats used in the pain studies and rat cell lines used in cell culture for validation.

Specific delivery of DsiRNAs to the CNS involves mixing the DsiRNAs with a delivery agent (iFect, Neuromics), and injecting the mix intrathecally to directly target the spinal cord and dorsal root ganglia (Figure 1A). The researchers perform two injections at 24 and 0 hours prior to administering a pain stimulant, and then use a characterized subchronic pain scoring system to note pain level over the next 60 minutes [3]. When they inject the DsiRNA to block neurotensin signaling, they have found the animal experiences more pain (Figure 1B). This increased level of pain is a result of down regulation of the natural alleviation pathway.

Figure 1. In vivo intrathecal delivery of neurotensin DsiRNAs block analgesic effect of neurotensin agonist. A) Confocal photomicrograph of a dorsal root ganglia section showing the uptake of Texas Red-tagged DsiRNAs by small, medium, and large neurons. Red dots correspond to DsiRNA, while the large black dots are neuron nuclei. The picture was taken 24 hr after 2 daily injections. B) Behavioral effect of 2 DsiRNAs targeting the G protein-coupled receptor Neurotensin NTS2 involved in pain modulation. A rat’s tail is immersed in a hot water bath and the latency time to flick the tail out is monitored in seconds. The baseline withdrawal latencies are under 4 sec. Injection of a NTS2-selective agonist (JMV) increases flick latency to 12 sec. If a pre-emptive intrathecal treatment of 2 daily doses of 1 μg DsiRNA is given 24 hr later, the NTS2 analgesic compound shows no more efficacy.

Beaudet and colleagues are also using DsiRNAs as an analgesic, by targeting chemokines that are believed to be involved in the CNS transmission of chronic pain. Using this model, the group targets a receptor involved in stimulating pain rather than alleviating it. A chemokine injected into the CNS will prime a severe inflammation of the spinal structures, similar to what could happen after a spinal cord trauma, for example. The injected chemokine causes immediate pain that persists for 7–10 days. When they inject DsiRNAs targeting the chemokine receptor 2 days prior to the insult, pain is inhibited for up to 7 days. By silencing the receptor via DsiRNA knockdown of its expression, pain is reduced. Beaudet says this genetic-analgesic methodology may be a new approach for situations where pharmacological approaches have proved inefficient to provide pain relief.

One of the concerns with using DsiRNAs is the potential for long-term reagent toxicity, both for the DsiRNA or the transfection reagent. The Sarret lab is able to use very low levels of DsiRNAs in these short-term delivery experiments and observe almost no side effects or off-target effects. They are now planning experiments to examine prolonged delivery of DsiRNAs. Beaudet says identifying the most appropriate transfection reagent that will not cause inflammatory responses itself has been the main concern. They have had good success with Transductin delivery reagent from IDT and have found that reagent gives them the best results so far.

The Sarret lab published the first proof-of-concept manuscript to detail in vivo work in the CNS [4], and continues to lower DsiRNA doses and examine the side effects that come with treatment. They currently have different models for some of the specific types of chronic pain (e.g., neuropathic, arthritis, and cancer) and are trying to accurately represent what is happening in the clinic to humans. The next step for the lab will be to implant osmotic pumps to deliver DsiRNAs to the intrathecal space for sustained release over 28 days.

An eye toward the clinic

These experiments move researchers closer to providing clinicians with solutions for alleviating long-term chronic pain. Patients who experience intractable pain (such as cancer pain that persists until death) may be the best candidates to try new procedures. In the worst-case scenarios, like bone cancer, patients may be offered invasive spinal therapies with the latest innovative treatments, such as DsiRNA injection directly into the spinal space. Beaudet imagines injections targeting receptors or channels involved in exacerbating painful influx may reset the neurons that are firing at a high rate and contributing to the chronic pain.

Alternatively, it may be possible to install an intrathecal pump to deliver the DsiRNA analgesic over a longer period of time. As with the animal studies, clinical success will partially depend on finding a transfection reagent appropriate for human trials with no inflammatory side effects. Beaudet is optimistic, but cautions that it is much too early to say if this approach will be successful therapeutically. 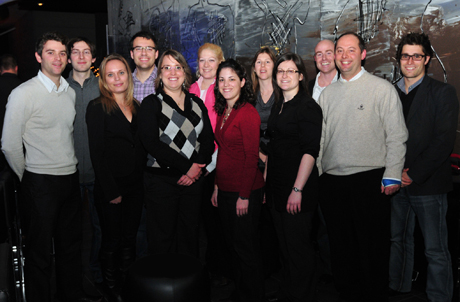 Nicolas Beaudet joined Dr Philippe Sarret’s team at the Faculty of Medicine of the Université de Sherbrooke (Quebec, Canada) 6 years ago. Prior to that, he studied biotechnology at the Université de Sherbrooke and Birmingham Cancer Institutes (UK). He further patented a nanoencapsulation technology for cancer therapy which earned him a master’s degree in applied microbiology at the Armand-Frappier Institute of the INRS University (Canada). His previous work focused on gene therapy and formulation. In the Sarret lab, Beaudet has collaborated with IDT as well as the Quebec Pain Research Network to develop new devices that evaluate chronic pain and on new drugs to sooth intractable pain. In addition to his professional activities, he is currently working on his PhD in health economy with a focus on evaluating the direct costs of low back pain. Nicolas Beaudet (3rd from right) and Dr Sarret (2nd from right) are pictured with Sarret lab staff and graduate students.

Use to inhibit miRNA function through steric blocking.

Synthetic 15–25 base oligos that localize to the nucleus. Modified for enhanced intracellular stability.

Use to arrest gene expression in vitro or in vivo.