New England Biolabs (NEB) is a manufacturer of high quality molecular biology reagents, including restriction and modification enzymes, for genomics research. In fact, much of our knowledge about these enzymes has come from basic research performed by scientists in laboratories at NEB.

Over the past decade, Next Generation Sequencing (NGS) has provided molecular biologists, enzymologists, and life science technology innovators unprecedented access to large collections of interesting candidate enzymes for research and technology development. In order to characterize the activity of these potentially useful enzymes, researchers must clone the gene of interest and express the protein in vitro or in vivo. NEB uses a variety of approaches to clone these genes, including traditional restriction enzyme cloning, USER™ cloning, as well as a number of newer DNA assembly approaches (e.g., assembly of single-stranded synthetic oligonucleotides).

The development of gBlocks Gene Fragments by Integrated DNA Technologies, Inc. (IDT) has reduced the time, error rate, and costs associated with producing single gene constructs or multiple genes within metabolic pathways. For NEB, use of gBlocks Gene Fragments and the recently introduced NEB Gibson Assembly Master Mix has reduced both the hands-on time and the total turnaround time of some of their cloning workflows.

For example, in connection with an internal research project, NEB researchers expedited the cloning of a 2.1 kb gene into a linearized pET21-a bacterial expression vector using 5 gBlocks Gene Fragments that spanned the entire 2.1 kb sequence. Each gBlocks fragment included a 20 bp overlap between adjacent fragments and a 20 bp overlap between the free ends of the vector and the gene assembly (see Figure 1). Gene fragments were quickly assembled with the linearized vector to create a 7.5 kb gene construct using the Gibson Assembly Master Mix and associated protocol. 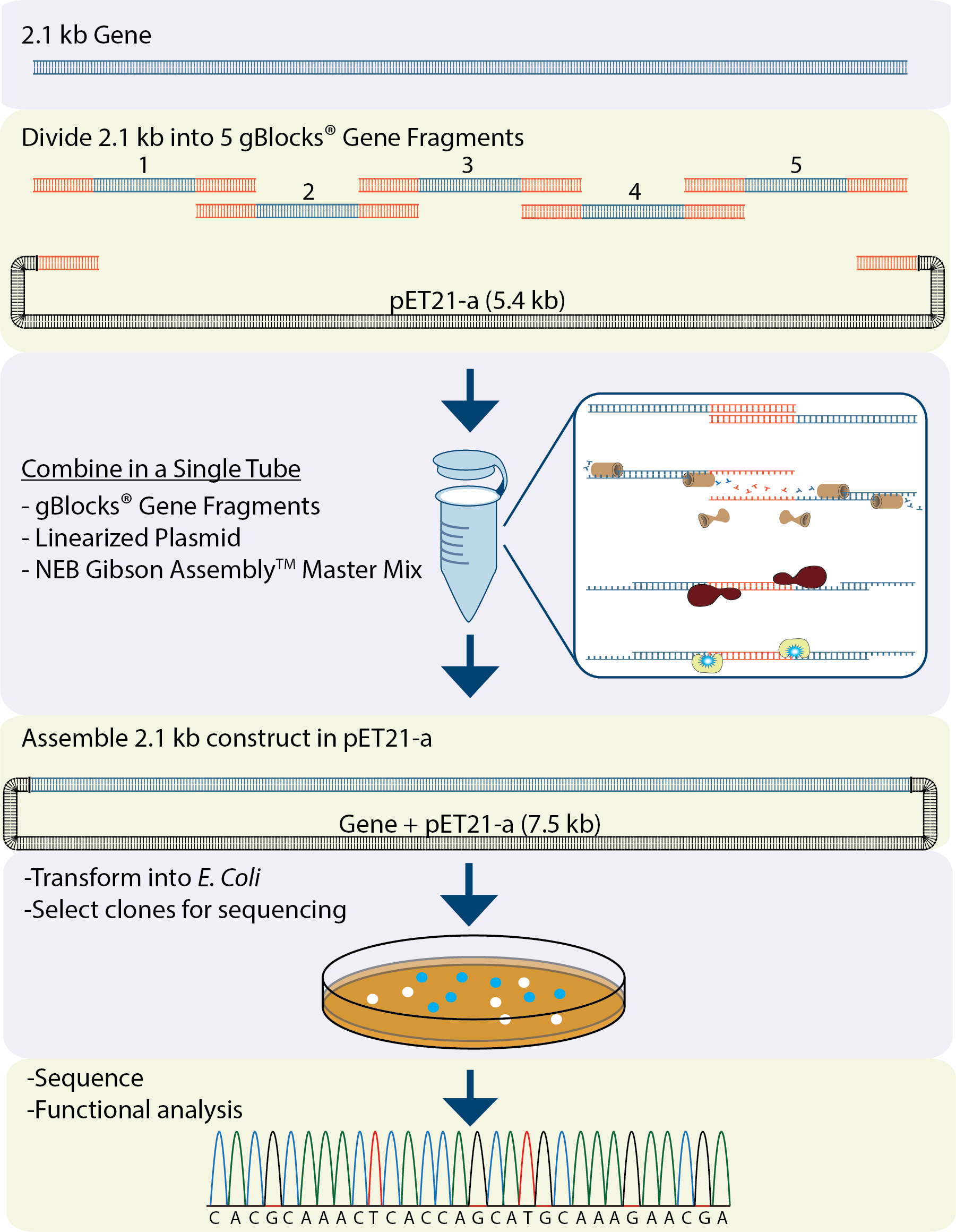 Figure 1. Cloning of 2.1 kb gene into pET21-a plasmid using IDT gBlocks Gene Fragments and Gibson Assembly Master Mix. To produce a 2.1 kb gene, 5 gBlocks Gene Fragments spanning the gene sequence were ordered, each with 20 bp of overlap with the adjacent fragment. The 3 enzymes in the Gibson Assembly Master Mix (NEB) work together to assemble the individual DNA fragments, in 1 hr, 50°C. A 5’ exonuclease chews back DNA ends leaving overlapping 3’ ends (orange), which then anneal. A high fidelity DNA polymerase fills in double-stranded gaps generated by the exonuclease. In the final step, a DNA ligase joins individual fragments [1]. Following assembly, 10 transformant colonies were analyzed, resulting in 2 plasmids with the correct sequence. Cloning and expression of this 2.1 kb construct were completed in 4 days.

To assemble the gene clone from 6 fragments (5 gBlocks Gene Fragments and the vector), the lab used 20 ng (0.06 pmol) of each gBlocks Gene Fragment and 0.05 pmol of linearized vector. (IDT supplies 200 ng (0.6 pmol) of each gBlocks Gene Fragment). Assembly was straightforward—the appropriate amounts of gene fragment and vector DNA were added to the Gibson Assembly Master Mix (NEB #E2611) and incubated at 50°C for 1 hour, followed by transformation into T7 Express Competent E. coli (NEB #C2566). Transformant colonies (n=10) were picked, cultured overnight, and plasmid DNA prepared from each transformant. DNA from each colony was sequenced to confirm the integrity of the entire 2.1 kb region.

In this experiment, 2 of the 10 colonies picked carried the correct 2.1 kb DNA sequence. The expressed protein was then confirmed by SDS-PAGE and further characterized using a biochemical assay. Cloning, sequencing, and characterization of protein activity took less than 4 days, shorter than necessary for a third party to synthesize the complete gene and provide a finished construct. An estimated timeline for Gibson Assembly cloning using gBlocks Gene Fragments is shown in Figure 2.

The use of gBlocks fragments to construct this 2.1 kb gene and assemble it into the pET21-a expression vector was simple and cost-effective, saved time, and resulted in fewer errors than the assembly of DNAs from single-stranded synthetic oligonucleotides. These benefits ensure that Gibson Assembly cloning using gBlocks Gene Fragments will be a method NEB researchers will continue to work with in the future.