Scientists in the Dernburg lab have successfully executed CRISPR genome editing in C. elegans. Read this research profile to learn about their approach to editing, homology directed repair, and progeny screening. An abbreviated method and link to a full protocol are also provided.

The Dernburg Laboratory (University of California, Berkeley, CA, USA) has been experimenting with CRISPR technology for genome editing in the nematode, Caenorhabditis elegans. They have found that injection of Cas9 protein complexed with the Alt-R® CRISPR tracrRNA:crRNA oligos from IDT provides a robust method for introducing mutations and insertions into C. elegans, far surpassing the editing efficiencies they have obtained with plasmid delivery of Cas9 and sgRNA. They report that the synthetic RNA oligonucleotide approach eliminates time, labor, and variability associated with in vitro transcription of sgRNAs at a very reasonable cost. The researchers chose to use the Alt-R CRISPR Cas9 System as scientists at IDT have done extensive in-house optimization of CRISPR RNA structure, chemical modifications, length, and delivery.

With plasmid-based delivery of Cas9 and sgRNA, the Dernburg Lab typically detect their desired insertion in only ~1% of red fluorescent or Roller F1 progeny, thus requiring screening of many progeny. Using Cas9 protein complexed with Alt-R CRISPR crRNA:tracrRNA to form a ribonucleoprotein (RNP), the group has obtained editing efficiencies ranging from 25–77% of red/Roller F1 progeny carrying (small) insertions, which are often homozygous. Larger insertions have been somewhat less efficient and more variable than the smaller indels, but still occur at frequencies high enough to make positive selection (e.g., for hygromycin resistance) unnecessary.

For the RNP approach to be successful, it is essential to have a good source of S. pyogenes Cas9 protein, ideally stored at high concentration. The Dernburg Lab has been using Cas9 protein produced on site by their core facility, and provided at ~40 µM, or ~6 µg/µL. S. pyogenes Cas9-NLS protein can also be obtained from IDT at 10 µg/µL in 50% glycerol [61 µM].

Insertion templates up to 200 bases are obtained as Ultramer® Oligonucleotides (IDT). For longer insertion templates, the lab uses gBlocks® Gene Fragments (synthetic dsDNA; IDT) or constructs a plasmid template, and amplifies these by asymmetric PCR (primer extension). Successful reactions produce a single major band on an agarose gel, which the lab then purifies [QIAquick® (Qiagen) or Zymo Clean & Concentrator™ (Zymo Research) column following protocol for ssDNA] and quantifies by A260. Gel separation and band purification can be particularly beneficial for more complex amplicons. Other methods for synthesizing single-stranded templates from dsDNAs should also be suitable.

For simple gene disruptions, one can inject the Cas9 + crRNA:trRNA RNP without a repair template and screen for indels. However, it is useful to include a repair template that will insert a small sequence, e.g., with a rare restriction site, which can greatly facilitate screening and (later) genotyping for strain construction or maintenance.

Q5® polymerase (New England Biolabs), the proofreading PCR enzyme primarily used in the lab’s experiments, does not always produce an asymmetric PCR product. In these cases, the scientists use Taq polymerase.

The researchers enrich for edited F1 progeny using 2 different methods based on prior publications. In the first, the scientists co-inject 2 plasmids carrying red fluorescent transgenes (pCFJ90 [Pmyo-2::mCherry] and pCFJ104 [Pmyo-3::mCherry]), and then pick and screen red fluorescent F1s. They also use the dpy-10 co-CRISPR strategy described by ;the Fire laboratory [2]. Both methods are quite effective. Dr Abby Dernburg, PI of the laboratory, explains, “The dpy-10 screening is a bit easier up front. Ironically, our mutation efficiencies using Cas9 protein with Alt-R oligos are so high that it can actually be hard to find many Rollers (dpy-10 heterozygotes) following dpy-10 co-CRISPR. Many F1 progeny from injected P0 animals are already homozygous for dpy-10 mutations, which means that you may have to cross this out. When edited F1 progeny are not homozygous, they often have indels at the second locus, indicating that cutting by Cas9 is extremely robust. When we do dpy-10 co-CRISPR with injected protein, we obtain ‘jackpot’ broods in which virtually all F1 produced during a time window after injection show a Dumpy or Roller phenotype, further indicating that a good injection often leads to extremely high editing efficiency.” 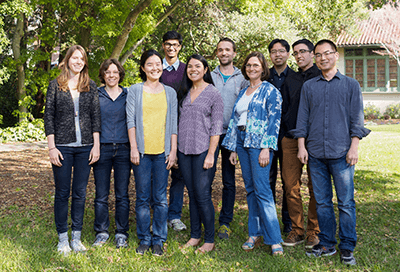 The Dernburg laboratory uses C. elegans to study chromosome 3-dimensional structure and behavior during meiosis. Errors during this special division process that transmits genetic information from parent to progeny lead to aneuploidy and are a major cause of human birth defects such as Down syndrome. A fundamental goal of this research group is to understand how homologous chromosomes interact with each other during meiotic prophase to ensure faithful segregation.

Their use of CRISPR technology has enabled the lab to carry out detailed functional analysis by introducing mutations into meiotic proteins, something that was impossible in C. elegans until very recently. The lab has also engineered a large number of genes by inserting epitopes and fluorescent protein tags for localization and in vivo imaging. You can read more about the Dernburg Laboratory’s research at https://mcb.berkeley.edu/labs/dernburg/.