How biotin became a tool of molecular biologists

Have you noticed how biotechnology often coopts nature’s most useful tools? The naturally occurring, extraordinarily strong bond that forms between avidins and biotin has provided a useful tool that has enabled numerous techniques that would otherwise be impossible. Learn about biotin's history as a research tool.

Biotin Discovery: Starting in an egg

Biotechnology has an inclination towards co-opting nature’s most useful tools. The naturally occurring, extraordinarily strong bond that forms between avidins and biotin has provided a useful tool that has enabled numerous techniques that would otherwise be impossible.

In the 1940s it was observed that chicks fed partially on raw egg whites would be prone to develop egg white injury, a disease known to be caused by deficiency of the essential vitamin B7, also known as biotin. This deficiency occurred even if the chick’s diet was supplemented with biotin. At this time, a young scientist named Edmond Emerson Snell had begun a distinguished career in the study of vitamins and their actions.

Snell soon isolated the responsible protein in egg whites that sequestered biotin, and it was named avidin in reference to the eggs from which it was isolated. Over the years it has been postulated that avidin may serve as an antibiotic for eggs by binding to free biotin that invading bacteria require for survival. However, the actual function of avidin remains to be firmly established.

In the 1960’s a new protein was discovered that had a remarkably similar structure to avidin despite very limited amino acid homology. This protein, which also binds to biotin, was isolated from the bacteria Streptomyces and was dubbed streptavidin. It has also been thought to serve as an antibiotic, in this case acting against competing bacteria.

It was discovered that avidins bind to biotin with great affinity. The bond between biotin and avidin has a dissociation constant of Kd = 10-15, making it one of the strongest noncovalent protein-ligand interactions in nature. The strength of the bond comes from several sources. Some are the usual suspects, such as extensive hydrogen bonding complimented by Van der Waals interactions. More exceptionally, once biotin slides into the tightly fitting pocket in streptavidin, a flexible loop of the streptavidin protein folds over the biotin, acting as a lid that further stabilizes the association.

By the 1970’s the high affinity biotin-streptavidin bond had been tapped for use in biotechnology, and it has become widely used since. In particular, biotinylated oligonucleotides are very effectively used in capture and purification assays. 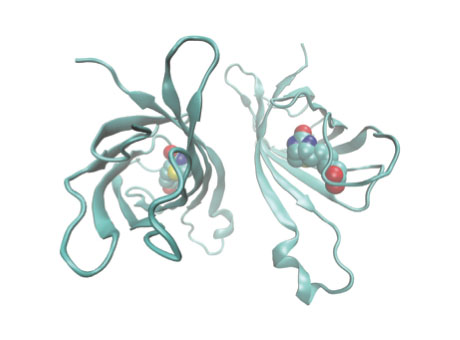 Apart from the strong, specific bond that forms between biotin and avidins, the system provides other advantages. In methodologies where biotinylated oligonucleotide probes target specific DNA or RNA molecules, biotin’s small size reduces steric hindrance, allowing molecular functions to proceed unaffected. Once the bond forms between biotin and (strept)avidin, the complex is stable through wash cycles and variations in pH, temperature, and organic solvent concentrations. This stability allows for many precipitation or pull-down assays in which a biotinylated oligonucleotide can be used to isolate an attached substance via biotin’s affinity to a streptavidin functionalized column or bead.

Too much of a good thing

While the highly stable bond between biotin and avidin is widely useful, it can also frustrate the researcher who would like to reverse the interaction, freeing the biotin from the streptavidin molecule. Attempts have been made to modify avidins or biotin to make the reaction more reversible, but they have generally been limited in scope due to pH range restrictions. A natural precursor of biotin called desthiobiotin (available from IDT) has recently been shown to be a very effective solution to the problem of reversibility [2].

This non-sulfur containing compound binds less tightly to avidins than its unmodified counterpart. This allows the desthiobiotin to be removed from streptavidin at physiological conditions with a simple wash of biotin.

Other applications of biotin modification

The biotin modification can also be used to effectively label oligonucleotides with a fluorophore in applications such as EMSA (Electrophoretic Mobility Shift Assays) or Southern blotting. Alternative constructs of biotin can be used as well. Dual Biotin is used in SAGE (Serial Analysis of Gene Expression) protocols and Biotin-TEG (triethyleneglycol ) can be beneficial for attaching oligonucleotides to nanospheres or magnetic beads.

While specialized biotin molecules can be useful in specific assays, it is important to remember that for most applications, standard biotin will suffice.

Read the article, Which biotin modification to use?, to learn more about the specific applications of each biotin we sell.