iGEM—extending the reach of synthetic biology

The International Genetically Engineered Machine competition (iGEM) assembles university-affiliated teams of undergraduate students in the fields of science, technology, engineering, and mathematics to design and build biological systems that operate in living cells. The program uses engineering approaches to biology and is devoted to education and competition in the field of synthetic biology, while encouraging scientific collaboration.

iGEM began as a month-long course at MIT in 2003, quickly expanded the next year into a summer competition of 5 teams, and by 2011 included 165 teams participating worldwide. In the spring, each team receives a set of biological parts (BioBricks) representing genetic elements such as promoters, genes, and plasmid backbones from the Registry of Standard Biological Parts. The teams use these and any new parts they design in different combinations to build biological devices and systems. Projects are often chosen for their broader humanitarian implications and have included an arsenic detector, inducible biodetectors with calibrated outputs, and a cost-effective red blood cell substitute. Projects run through the summer and are followed in the fall by a series of competitions that culminate in the World Championship Jamboree.

In 2011 IDT sponsored 11 iGEM teams by providing credit towards obtaining IDT products, including oligonucleotide primers and synthetic GENEs for use in the team research projects. Here we highlight 4 of the 2011 teams that IDT sponsored.

Composed of 15 undergrads and 5 advisors, the 2011 Johns Hopkins University iGEM team (Figure 2) chose to tackle malnutrition, a global health crisis caused by a lack of essential micronutrients in the diets of millions of people worldwide. To address this, the team set out to create a vitamin-producing variant of the baker’s yeast, Saccharomyces cerevisiae. This ubiquitous organism serves as the leavening agent in the staple food, bread. “The Hopkins team hypothesized that by genetically modifying S. cerevisiae, the yeast cells would additionally fortify bread with vitamins. Moreover, they envisioned their modified yeast could be easily and cheaply shared among impoverished people in the form of starter dough, thus presenting a sustainable solution to a critical global health problem,” notes Yizhi (Patrick) Cai, himself an iGEM team member during the program’s first year of international competition, and now one of the Hopkins’ team’s advisors.

Figure 1. Vitamin A containing VitaYeast grown on a culture plate.

To construct a vitamin-producing yeast strain, the team imported 3 genes for the synthesis of pro Vitamin A (beta-Carotene) from the yeast, Xanthophyllomyces dendrorhous, into S cerevisiae. Likewise, 3 genes from the Vitamin C (L-ascorbic acid) pathway identified in the plant genome Arabidopsis thaliana were codon-optimized, synthesized de novo, and assembled into expression cassettes for expression in S. cerevisiae. IDT provided oligos.

To test their hypothesis, the team used a combination of HPLC and photospectrometric methods and demonstrated that both yeast cells and bread baked with their modified strain contain beta carotene. Currently, the team continues to test a library of promoters and 3′ UTRs to optimize vitamin C production and vitamin expression levels. Of course no one has been allowed to taste the bread made with the fortified yeast yet, though it looks and smells wonderful. 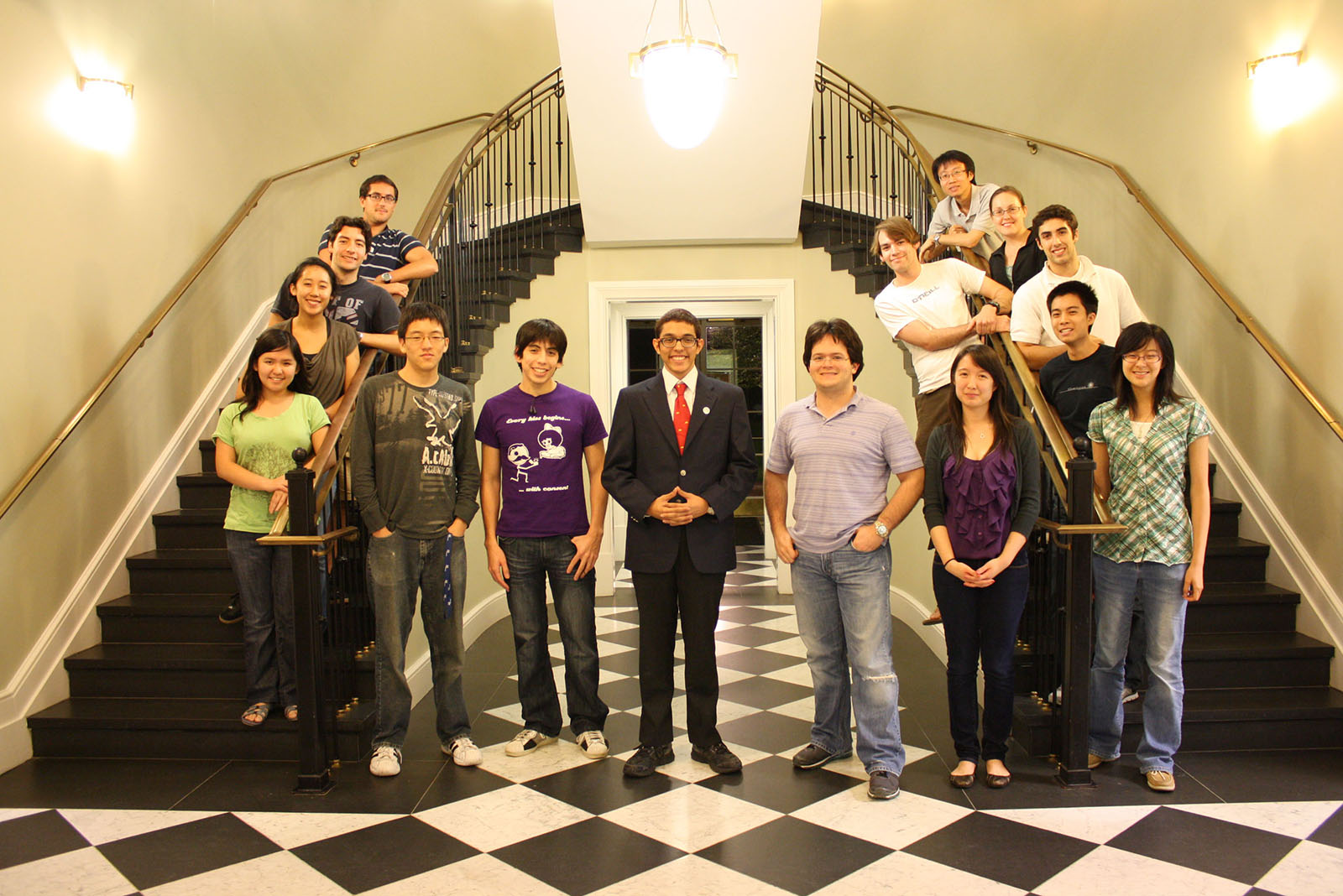 Figure 2. The 2011 Johns Hopkins iGEM Team. The team was named one of the “Sweet Sixteen” winners at the World Championship Jamboree. Read more about their project here.

The 8-member Yale iGEM team (Figure 3) began meeting in February 2011 to brainstorm projects. The harsh Connecticut winter weather may have influenced their choice—characterization of natural antifreeze proteins. Such proteins inhibit ice formation and recrystallization and have broad applications in cryopreservation of food and tissue, as well as in cryosurgery and agriculture. The team examined several such proteins derived from meal worms to eel pouts, but eventually focused on characterizing the structure and function, and optimizing the expression of a novel hyperactive antifreeze protein recently isolated from the Siberian beetle, Rhagium inquisitor (RiAFP).

With the codon-optimized RiAFP gene supplied by IDT, the Yale team developed a large-scale stable expression system for the protein alone and with a GFP tag. They purified the protein and used it in functional studies to document its ice-binding and cyroprotective qualities. The students also began directed evolution experiments to generate mutants with enhanced cyroprotective properties using multiplex automated genome engineering (IMAGE). In addition, they crystallized the protein for x-ray crystallography to determine how the protein’s structure relates to its function. 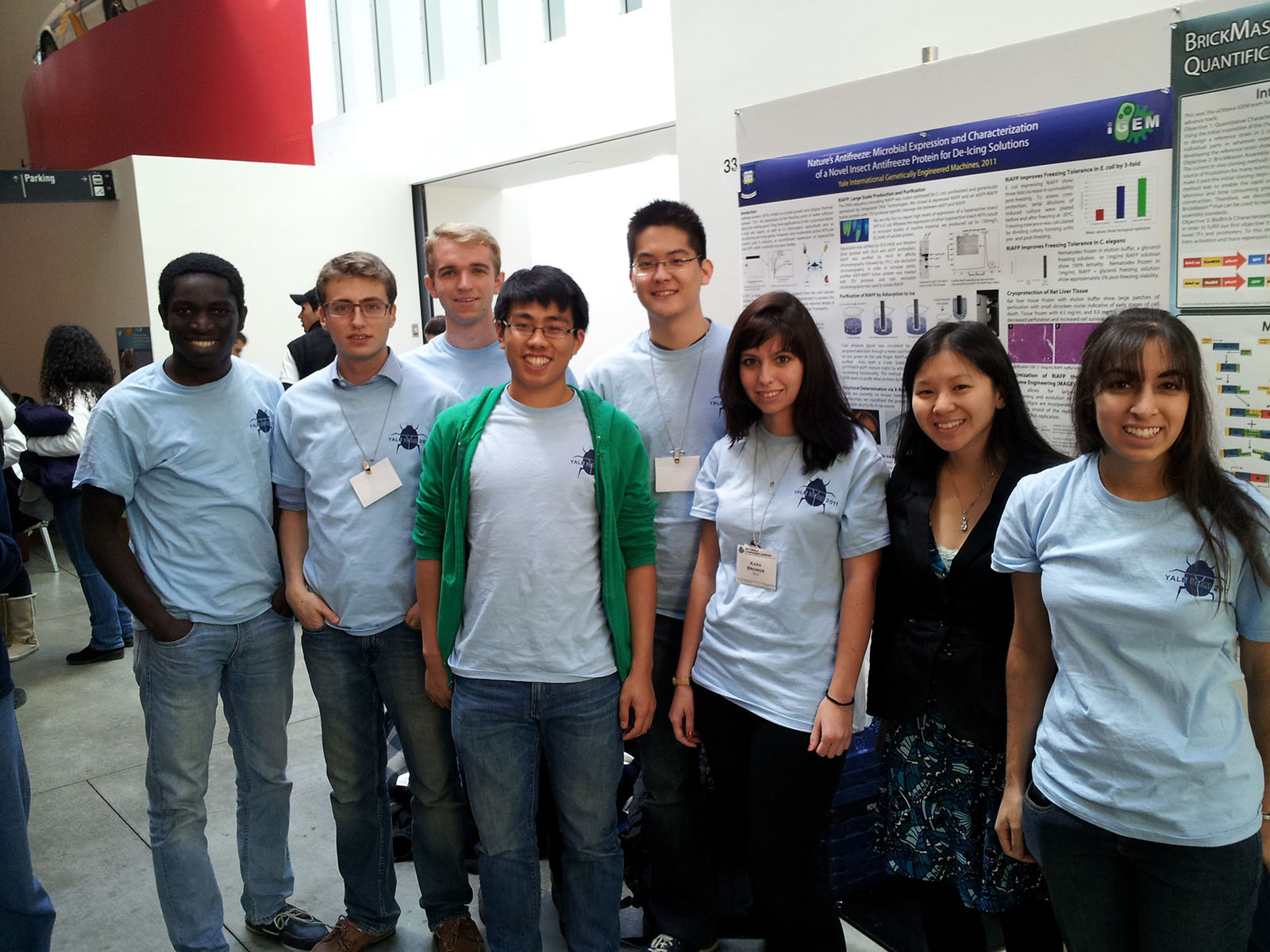 Figure 3. The 2011 Yale iGEM Team. The team was named one of the “Sweet Sixteen” winners at the World Championship Jamboree. Their antifreeze work also won “Best Food or Energy Project” and “Best New BioBrick Part”. Read more about their project here.

Each member of Cornell’s 10-student 2011 iGEM team (Figure 4) scoped out a project idea to present to the group, which voted on the most interesting and doable. The team chose to design a cell-free method for producing complex biomolecules by immobilizing the enzymes for the particular biomolecule’s synthetic pathway on sequential microfluidic devices. This “BioFactory”—essentially a continuous flow linear biochemical pathway—streamlines large scale biomolecule production by eliminating purification steps and unwanted side reactions, and also avoids regulations normally placed on genetically modified organism (GMO) processes.

Using the conversion of L-tryptophan to the green pigment prodeoxyviolacein as a test case, the students expressed the 3 synthetic enzymes needed for this pathway. IDT provided oligonucleotides as part of this process. The group took advantage of the strong biotin-avidin binding interaction by adding aviTag peptides to the enzymes. The AviTags instruct E. Coli to add biotin to the enzymes. By coating microfluidic devices with Neutravidin and passing the AviTagged enzymes through them, the students were able to coat each microfluidic chip with a specific enzyme. “The biotinylated enzymes bind to the Neutravidin in the devices with a ligand interaction capable of withstanding the continuous flow rates of solutions against the surface,” noted Maneesh Gupta, a physics student on the team. These devices were assembled sequentially to create the desired biochemical pathway. 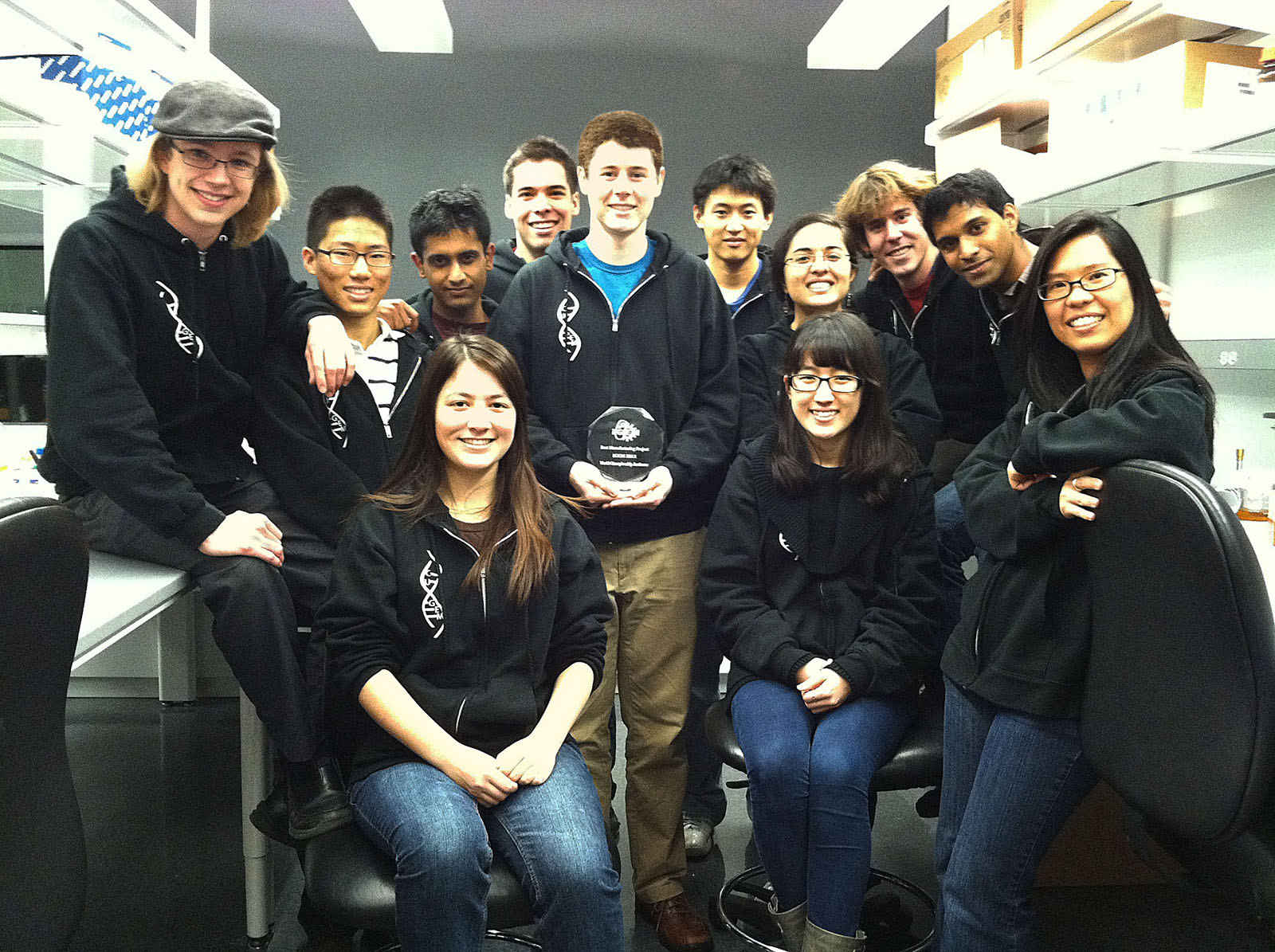 Extracting natural resources, such as oil, results in the accumulation of byproducts from the extraction and refinement processes. Toxic, aqueous byproducts generated are usually stored in tailings ponds, and these can have a severe negative impact on the surrounding environment. Although one of the smaller universities in the competition, the Lethbridge team (Figure 5) has garnered resources from several industrial sponsors to develop a Tailings Pond Clean Up Kit (TPCU) for use directly in the ponds and/or at large-scale treatment facilities. The TPCU Kit has both local and international application and has been a recurring theme over the past 3 years of the University of Lethbridge’s participation in the iGEM competitions.

The 2011 TPCU Kit has several components. The students have adapted enzymes from existing microorganismal pathways to metabolize toxic organic compounds such as naphthalene and catechol, present in the ponds. Using engineered negatively-charged biological microcompartments (MCs) from a mutated form of lumazine synthase and by engineering poly-Arg tags onto their enzymes, the group has succeeded in localizing proteins to these MCs. Pores in the MCs allow naphthalene and catechol to diffuse in for efficient compartmentalized enzymatic processing.

To remove heavy metals from tailings ponds, the team uses a protein from Magnetospirillum magneticum that forms nanoparticles from aqueous heavy metals. They are also taking advantage of the polysaccharides found on the surface of bacterial membranes to aggregate clay particles from the fine clay sediment in the ponds. The aggregates settle out faster, clarifying the water. To ensure these GMOs do not themselves become environmental hazards, the team included a naturally occurring enzyme that degrades DNA from the GMOs when induced. Oligonucleotides from IDT have helped the team with gene synthesis and screening for the modified versions of their enzymes. 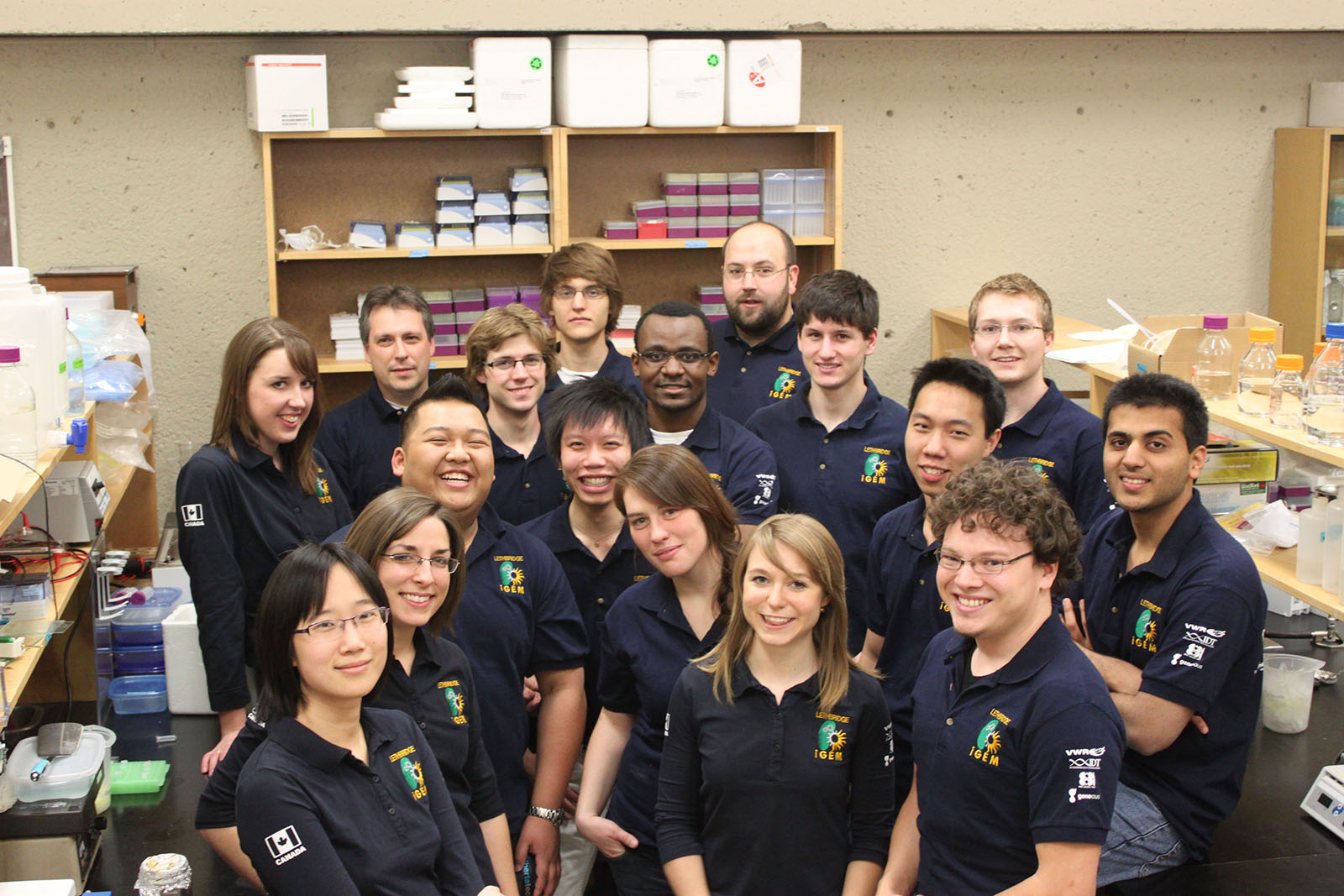 Figure 5. The 2011 Lethbridge iGEM Team. The team was one of four finalists at the Regional Jamboree (Americas) and was named one of the “Sweet Sixteen” winners at the World Championship Jamboree. Read more about their project here.