Projects from 2 of the prize-winning 2013 iGEM teams show how non-standard natural and synthetic amino acids can be used in 1) peptide synthesis, and 2) tuberculosis monitoring and treatment. Learn how both projects made use of gBlocks® Gene Fragments to speed construct assembly.

The International Genetically Engineered Machine competition (iGEM) is the preeminent, multinational, undergraduate synthetic biology competition that takes place each year. The competition focuses on engineering aspects of synthetic biology as a foundation to develop research skills and foster collaboration among student participants. The duration of the competition is fairly short, with most of the work occurring over the summer months, when most students take time off from their studies. It is truly impressive the types of relevant world issues for which the teams are able to address and test solution in such a short time.

From a course to a contest

iGEM began as a month-long course at MIT in 2003, and the following summer transitioned into a competition between teams from 5 universities. Since then, iGEM has grown into an international program, with 245 teams registered in 2014. Teams begin each competition with a set of biological parts, called BioBricks, composed of individual genetic elements such as promoters, genes, and plasmid backbones, from the Registry of Standard Biological Parts (http://partsregistry.org). The teams use these BioBricks, and any new parts they design, in different combinations to build biological devices and systems that solve real-world problems of their choosing.

For the 2013 competition, two of the winning teams, Heidelberg and Paris Bettencourt, were among the many teams that received support from IDT. Both teams used IDT gBlocks Gene Fragments to help them successfully implement their projects. Fanny Georgi and Florian Schmidt described the rationale for Team Heidelberg’s use of non-standard amino acids, and Matt Deyell, of the Paris Bettencourt team, discussed with us the science behind Team Paris Bettencourts’ work on tuberculosis. While we summarize those interviews here, there is much more science involved in these projects than we can cover in this article. You can learn more about the teams and the full details of their projects from their team wikis at http://2013.igem.org/Team:Paris_Bettencourt and http://2013.igem.org/Team:Heidelberg, respectively.

Typically, when building genes for any purpose, scientists and engineers are limited to the 20 standard amino acids that are encoded by the genetic code. However, in 2013, team Heidelberg was the overall grand prize winner in the iGEM competition for their impressive work in which they made short peptides using synthetic chains of enzyme complexes called non-ribosomal peptide synthetases (NRPSs). NRPSs are commonly found in bacteria and fungi and are able to incorporate amino acids that are not part of the standard genetic code. The peptides and non-standard amino acids that these organisms produce are often of unknown function and, interestingly, they are not limited to the peptidyl bonds of ribosomal proteins.

The team hopes their NRPS project will allow scientists to take advantage of useful properties of some of the hundreds of possible natural and synthetic amino acids that are now available for custom peptide synthesis. The potential for the project is significant. The ability to access so many amino acids would likely result in various new applications, including new drugs, new reagents for research, and enzymes for recycling.

To make working with NRPSs easier, the team developed design software that other researchers can use to identify and design their own NRPS chains. Team Heidelberg then demonstrated that their approach works in 2 practical applications.

In one project, the students cloned the delftibactin NRPS module from D. acidovorans and transferred the gene into E. coli cells. This useful NRPS peptide is able to precipitate gold from solutions, and the team demonstrated that they could use the modified E. coli to recycle gold from old electronics. The team produced a blue molecular indigoidine tag that can be used to visually confirm and quantify expression of other peptides. They also used this tag to demonstrate that NRPS modules can be optimized for expression of the indigoidine tag and, possibly, other characteristics. 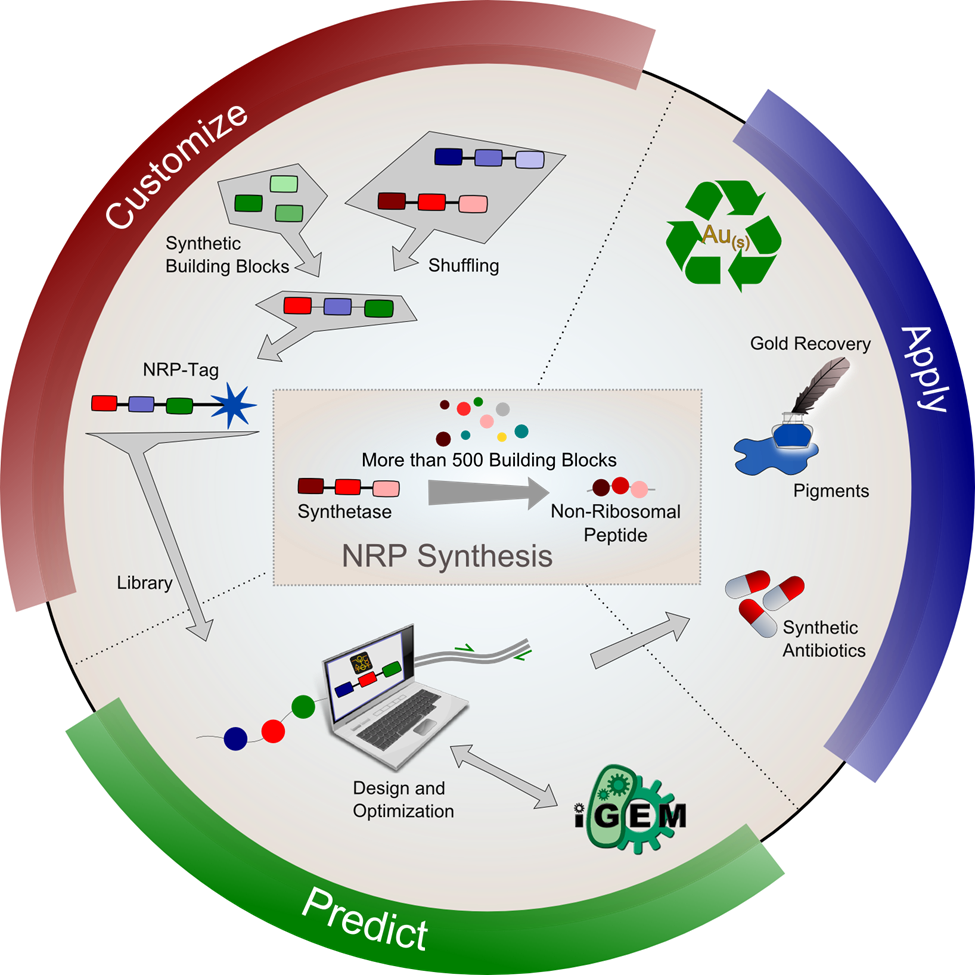 The Paris Bettencourt iGEM team chose to focus on a specific world health problem. They won the grand prize for their project addressing several aspects of tuberculosis (TB) monitoring and treatment. TB is a disease caused by Mycobacterium tuberculosis, which attacks cells primarily located in the lungs. TB is highly contagious, and is generally difficult to treat, due to the fact that bacteria can hide inside macrophages to evade detection and treatment. In addition, there are strains that are resistant to standard TB drug therapies—multidrug resistant TB—that are a significant health problem in some geographic locations. The team worked on four projects aimed at various aspects of detecting, studying, and treating TB.

For TB detection, the team designed a CRISPR-based mechanism coupled with a LacZ reporter gene to quickly identify the presence of resistance genes in aspirated samples by simple visual inspection.

With the goal of finding new therapeutic targets, Team Paris Bettencourt developed a more effective system for studying TB in the lab. By introducing an important sulfite reduction pathway from M. tuberculosis into E. coli, the resulting E. coli strain is easier and safer to grow in culture than M. tuberculosis. The students were then able to use this tool to test the effects of 10 potential drug candidates targeting this pathway in TB.

The Paris Bettencourt team also developed two synthetic biology methods to access and treat TB infections. One approach was the development of another E. coli strain that expressed the listeriolyin O gene, a gene that allows listeria to enter cells. Those E. coli were engineered to express a second trehalose dimycolate hydrolase gene, which produces a protein capable of degrading the cell wall of M. tuberculosis. The second approach used a phage expressing siRNAs to target M. tuberculosis. 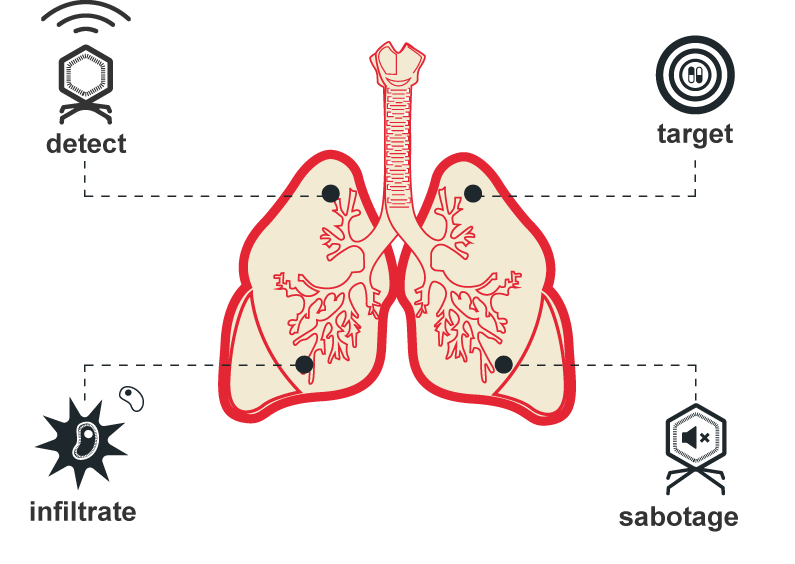 Another interesting aspect of iGEM is that teams are often composed of students across seemingly unrelated disciplines. While the Heidelberg team was composed entirely of students who had some level of scientific training, other teams, like the Paris Bettencourt team, have members with no scientific background. Paris Bettencourt team member Matt Deyell said that this was definitely one of the interesting aspects of the iGEM experience. He also readily admitted that he found it challenging to explain their project to team members in non-science fields.

Cooperation and teamwork go beyond members within a team as well. The iGEM competition even rewards collaboration between teams. Matt Deyell explained how Paris Bettencourt earned points towards a gold medal through collaboration with iGEM teams from Israel and Calgary. iGEM offers sufficient prizes for teams not to worry that helping others will limit their chance for an award.

All of the iGEM teams also maintain wiki pages that cover all aspects of the teams, their projects, and their progress. Many of the wikis are exceptionally well designed, and the best ones also receive awards. The wikis and presentations are definitely worth visiting and can be found with the iGEM competition results at www.iGEM.org. The presentations at the regional and semifinal jamborees are similarly creative.

What we here most consistently from iGEM teams is how positive their overall experience has been, and many of participants also say that the competition has had a direct influence on their next education and or career goals. This came up again this year in our conversation with Fanny Georgi, who told us that she is looking for PhD programs that would allow her to do more of this kind of molecular engineering and that some of her other team members had similarly changed their plans for future studies.

Other members of Team Heidelberg were similarly motivated to continue to work on aspects of the team projects into which they had invested so much time and creativity, especially the software. This seems to indicate a resounding success that is within the stated goals of the iGEM organization.

For years, IDT has supported iGEM participants in their efforts to create solutions to all kinds environmental, medical, and technical problems. Support comes in the form of custom, high quality, double-stranded DNA fragments—gBlocks Gene Fragments. In 2016, over 250 teams took advantage of our offer to receive up to 20 kb of gBlocks Gene Fragments for free. Find out more at www.idtdna.com/igem.