Product Spotlight: Methods for CRISPR-Cas9 genome editing are diverse, but not all of them perform equally well. Learn about the Alt-R® S.p. Cas9 Nuclease 3NLS that, when used in combination the optimized Alt-R CRISPR crRNA and tracrRNA, provides a highly effective editing solution that is also easy to use.

CRISPR-Cas9 genome editing is changing the landscape of genomic research. The CRISPR-Cas9 mechanism relies on the Cas9 endonuclease to generate double-stranded breaks at specified sites in double-stranded DNA (dsDNA). The native Streptococcus pyogenes Cas9 protein that is most commonly used requires a 42 nt CRISPR RNA (crRNA) and an 89 nt transactivating CRISPR RNA (tracrRNA) to guide and activate the nuclease for target specific cleavage of dsDNA. The cleaved DNA is then repaired by one of two available cellular mechanisms: the error-prone non-homologous end-joining that is used to introduce frameshift mutations into protein coding sequences, leading to gene disruptions; and homology-directed recombination that is use to introduce foreign DNA into the genome.

For optimal on-target editing efficiency, IDT offers the Alt-R S.p. Cas9 Nuclease 3NLS. The addition of this Cas9 protein gives researchers a powerful new tool that can be combined with Alt-R CRISPR crRNA and tracrRNA into a ribonucleoprotein (RNP). The RNP is active upon delivery and is compatible with lipofection with commercially available reagents (see User Guide) or electroporation methods, and outperforms methods that rely on transfection of DNA expression constructs or Cas9 mRNA (Figure 1). 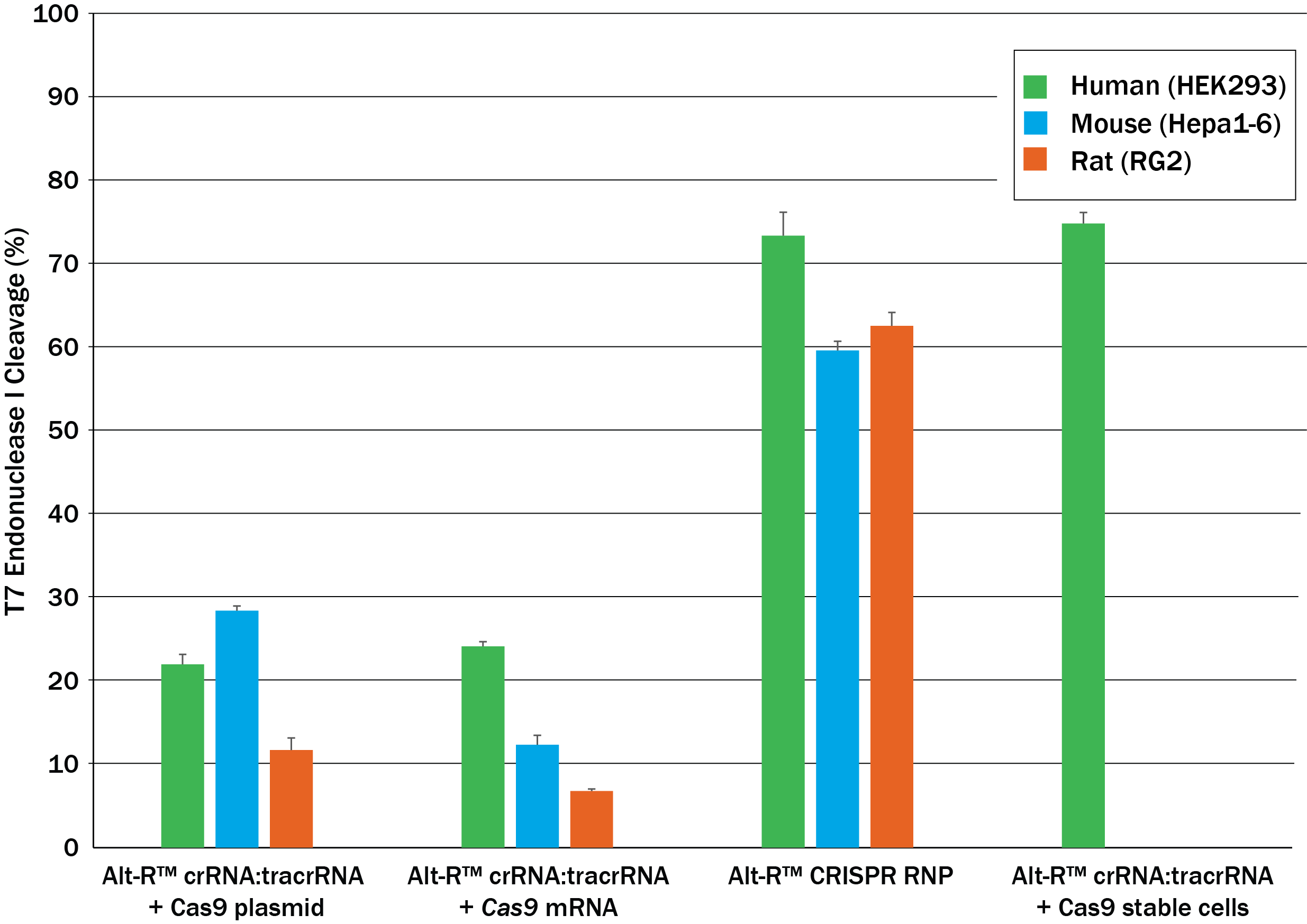 In addition to improved editing performance, using RNP complexes, instead of DNA expression constructs or Cas9 mRNA, mitigates some of the problems associated with other methods [1,2]. For example, RNPs eliminate genomic incorporation issues associated with introducing double-stranded DNA expression constructs, and greatly reduces or eliminates toxicity observed when delivering long, in vitro transcribed RNAs. Also, because RNPs are non-renewable, this method allows for precise control over the dose of editing complexes, for more consistent editing results.