Many biopharmaceutical companies are focused on discovery and development of improved vaccines, as well as creating antibody-based therapeutics for oncology and autoimmune diseases. Modern vaccine research takes full advantage of all the commonly available molecular biolo­gy techniques, including synthetic biology methods.

For many scientists, creating candidate vaccine or therapeutic antibodies often includes a substan­tial amount of molecular cloning and cell culture that can be significantly time consuming. Researchers clone and test viral genes and gene variants to determine which genes and resulting peptide motifs make the best potential vaccine or therapeutic targets. Traditionally, this would have been accomplished by standard PCR from a viral template (a wait which might be as long as a few weeks for physical sample availability after the onset of a pandemic), or by assembling mul­tiple synthetic oligonucleotides using PCR.

While PCR is a robust method for cloning and gene assembly, the amplification and purification procedures are time consuming. Generating constructs by PCR can also pro­duce unexpected mutations and potential sequence artifacts, and may require additional optimization and troubleshooting to obtain the desired sequence. The ability to order a synthet­ic, double-stranded DNA product that is sequence-verified allows researchers to skip the PCR step altogether, and minimize the potential pitfalls associated with PCR.

For anyone performing antibody research, gBlocks or eBlocks Gene Frag­ments are an ideal size for cloning antibody variable regions, which are the domains necessary for antigen recognition. gBlocks Gene Fragments are sequence verified, double-stranded DNA fragments that vary from 125–3000 bp in length and can be synthesized based on the desired sequence information for ordering. To create diversity, gBlocks can include degenerate nucleotides at various positions. eBlocks Gene Fragments are also double-stranded synthetic DNA ranging from 300–900 bps in length and can be shipped in 1–3 business days. Their speed and reliability makes eBlocks especially suited for high-throughput screening methods such as vaccine and antibody therapeutic research.

To increase efficiency, gBlocks and eBlocks fragments are also compatible with most synthetic gene assembly methods, many of which are substantially faster than restriction cloning. Constructs are also easier to design since they do not require specific DNA restriction sites in the sequences. For example, the Gibson Assem­bly™ Method, an isothermal technique that joins multiple DNA elements with overlap­ping ends easily, in a single, 1-hour reaction, has improved cloning times dramatically. As shown in Figure 1, this method has worked well for researchers to assemble multiple synthetic DNA fragments into a plasmid vector, creating entire constructs quickly and easily. Previous DECODED articles have covered cloning of antibody variable regions [1], as well as the Gib­son Assembly Method [2, 3]. 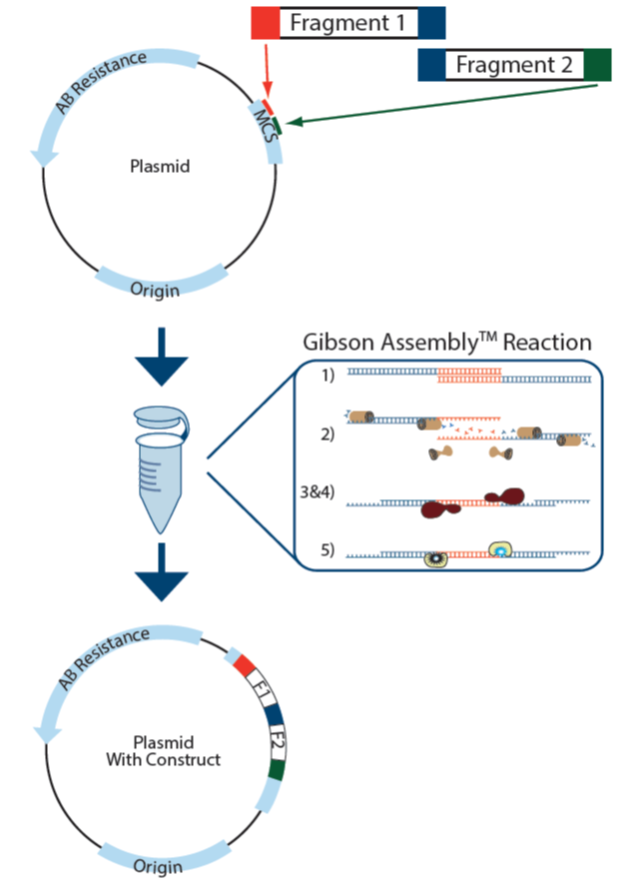 Figure 1. Assembly of gBlocks Gene Frag­ments using the Gibson Assembly™ Method. 1) Two or more gBlocks Gene Fragments are de­signed with sequences that overlap one another and the desired insertion region of the multiple cloning site (MCS) or other plasmid location. The plasmid is linearized by restriction digest or PCR. Linearized plasmid and fragments are combined in a tube with Gibson Assembly Master Mix. In a simple, 1-hr reaction, 2) exonucleases digest the 5’ DNA ends; 3) the resulting complementary overhangs anneal; 4) high-fidelity polymerases fill in remaining gaps; and 5) a ligase covalently joins DNA fragments to the plasmid to generate the complete construct. Many segments of DNA can be assembled in this way to generate a desired construct [3].

Vaccine research involves screening many possible antigens or antibodies and identi­fying a small subset of the most efficacious of these. After a library of synthetic DNA fragments is combined with the appropriate antibody gene, the library of recombinant DNAs is expressed into a large set of proteins. There are many methods for expression of the recombinant genes in vivo as well as in vitro. By using synthetic biology tools, including gBlocks and eBlocks Gene Fragments, commercialization can happen faster with the prom­ise of a healthier future for us all.