Dr Matt Strain at the University of California, San Diego is interested in developing new technologies for monitoring HIV (human immunodeficiency virus) DNA and RNA in people undergoing antiretroviral therapies. Within the virology field, his lab was an early adopter of droplet digital PCR (ddPCR) for absolute quantification of HIV targets. We talked to Dr Strain about the development of assays and protocols for ddPCR and discussed the benefits and some limitations of the technology in his research where minimal target is present.

Initially, Dr Strain was interested in ddPCR because it offers absolute quantification without the need for reference standards or endogenous controls. However, there were no standardized clinical assays for HIV using this method, and developing qPCR assays for HIV presents some specific challenges. As Dr Strain notes, one reason for the lack of standardized assays is that “the HIV genome is highly variable and can differ by 10% or more in a single infected person”. In real-time qPCR that variability is problematic because even a single SNP can greatly affect amplification efficiency, which will alter the Cq value and reproducibility of the assays. Because ddPCR records only the production of the end-point amplicon, it is able to produce accurate quantification even with sub-optimal amplification efficiency and, similarly, it is not as critical to have standardized assays to reproduce experimental results.

Dr Strain and his colleagues also observed that ddPCR is more precise than real-time qPCR in their HIV assays for target concentrations below 300 copies/106 cells [1]. The added precision is an important advantage since HIV targets are often present at very low concentrations relative to the cellular DNA background. This is especially true for the types of individuals the scientists are interested in—those undergoing antiretroviral therapy.

Despite these benefits, ddPCR assays also have some challenges. Dr Strain specifically points to problems that he and his colleagues encountered with setting the threshold for positive and negative droplets. One problem was that using the Bio-Rad software to automatically set the threshold produced some calls that were visibly incorrect upon closer inspection of the data. This prompted Dr Strain to write custom software that improved these results but was not able to entirely eliminate the incorrect calls [1]. The threshold problem was more pronounced when starting with RNA samples, possibly because a component of the ddPCR buffers interferes with reverse transcription. The reduced fluorescence in the RNA assays results in overlapping positive and negative data points, which leads to experiment failures or underestimation of sample copy number.

Since publishing their initial findings [1], the lab has switched to using ZEN™ Double-Quenched Probes for all of their ddPCR assays. ZEN Double-Quenched Probes have a 3′ Iowa Black quencher, combined with an internal ZEN quencher that is only 9 bases from the fluorophore reporter at the 5′ end. The combined quenchers are compatible with ddPCR, and can lead to reduced background fluorescence and increased signal compared to similar single-quenched probe designs, resulting in improved ddPCR resolution (Figure 1).

Dr Strain tells us, “We haven’t needed the double-quenched probes for every assay, but they work well in ddPCR, and there is value in the lower background that double-quenched probes can provide, especially when there may be mutations in primer or probe target sites.” For these HIV assays, Dr Strain says, “We are looking at really low copy numbers, so individual droplets matter”.

Open-access protocols, including updated probe designs for the HIV assays, can be found here.

Figure 1. ZEN Double-Quenched qPCR Probes increase discrimination between positive and negative droplets in ddPCR. Absolute florescence is strictly dependent on probe sequence and length. Here, FAM-labeled HIV probes (Pol HIV and 2LTR HIV) that either included or omitted a second quencher, ZEN Internal Quencher (IDT), were compared in ddPCR assays performed with (A) RNA samples and (B) DNA samples. In both cases, the use of a ZEN Double-Quenched Probe reduced fluorescence of the negative droplet population. This facilitated discrimination of positive vs negative droplets. The positive cluster in the assays also appeared “tighter”, which made it easier for the research team to set the threshold.

The Strain lab continues to develop ddPCR as a tool for HIV research with various types of samples and applications. Currently, they are using their RNA assays to quantify virus in cultures of patient cells, where the scientists have activated virus production ex vivo. This approach gives these researchers a good indication of the latent reservoir of cells in the population that are capable of producing more virus—the cells that they and others want to eliminate to eradicate HIV.

Dr Strain is also working on an open source dPCR platform that will allow HIV viral load monitoring as well as monitoring of other disease types. The system will use a microwell chip developed in his lab that is currently undergoing refinement. This format also addresses some of the problems the Strain group has encountered, such as the possibility of PCR or cell lysis reagents interacting with the ddPCR chemistry in detrimental ways. Essentially, the microwell system would provide a more robust assay that is compatible with a wider range of experimental conditions.

Digital PCR (dPCR) works by preparing samples and reagents in the same way as other qPCR methods, but then partitioning the reaction into picoliter or smaller volumes, such that each partition contains either 1 or 0 copies of the target template. The partitions can be created using microwell “chips” or, as in droplet digital PCR (ddPCR), by using surfactant chemistries to divide the PCR into thousands of droplets. The PCR is run after partitioning so that target sequences are only available for amplification in a portion of the droplets. End-point fluorescence is measured, and those partitions that fluoresce are counted as positive for having the target transcript, with the remaining partitions counted as negative. The binary positive or negative categorization is why this method is described as “digital”. For a more detailed summary, see the DECODED article Digital PCR (dPCR)—what is it and why use it?. 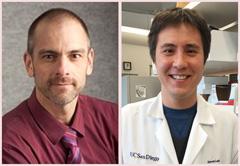 While he has been interested in science from an early age, Dr Matthew Strain (left) has followed his scientific interests down somewhat unorthodox paths to get to his current research. After undergraduate and graduate studies in theoretical physics, he pursued a medical doctorate, which he felt would give him the ability to have a more direct impact on the daily lives of people. While in the MD program at University of California, San Diego (UCSD), he realized he wanted to merge his MD and PhD aspirations, and identified research faculty who helped him forge a path that achieved both goals through quantitative aspects of HIV research. Currently, Dr Strain is an assistant professor at UCSD.

Steven Lada (right) has been doing research on infectious disease (Dengue, Influenza, HIV) for almost a decade. As a research associate, he puts into practice the assays developed in the Strain lab. With input from Dr Strain, he designs the experiments that define and validate the group’s HIV assays.