In 2015, IDT awarded Dr Patricia Tavormina with the inaugural ISO 14001 Sustainability Award for her innovative research on methane-oxidizing bacteria. Learn about Dr Tavormina’s work, and how her findings could someday guide methane mitigation strategies for a more sustainable future.

An introduction to climate change

Global warming. Climate change. These buzzwords, frequently heard in today’s political and scientific discussions, refer to the gradual increase in the average temperature of the Earth’s atmosphere and oceans. The National Resources Defense Council (NRDC) calls climate change the “single biggest environmental and humanitarian crisis of our time, endangering our health, communities, economy, and national security”. This notion is becoming increasingly clear as empirical evidence accumulates, but plans for large-scale solutions to the problem are scarce.

Dr Patricia Tavormina, Senior Research Scientist at the California Institute of Technology (Caltech), is focused on changing that. Tavormina works in Dr Victoria Orphan’s lab within Caltech’s Division of Geological and Planetary Sciences, where she studies methane-oxidizing bacteria (MOB)—a relatively unexplored group of microorganisms that consume methane and convert it to organic carbon. Her research investigates the phylogenetic and functional diversity of MOB, anticipating that a deeper understanding of their nature will help guide methane mitigation strategies in a more sustainable future. In September, Integrated DNA Technologies (IDT) awarded Tavormina with an inaugural ISO 14001 Sustainability Award to support her innovative research, which is described here.

Methane (CH4) is the second-most prevalent greenhouse gas found in the atmosphere, and over 60% of its sources are considered anthropogenic, or man made [1]. (See Figure 1 for examples of these sources in the U.S.) While it is less abundant and has a shorter lifespan in the atmosphere than carbon dioxide (CO2), it is much more efficient at trapping heat from the sun. For this reason, its impact on climate change is estimated to be over 25X that of CO2. This is troubling, as methane levels in the air have increased dramatically in the last 40 years (Figure 2). 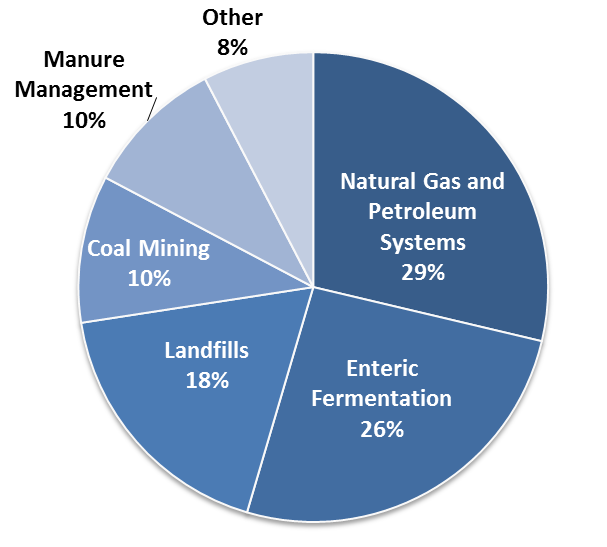 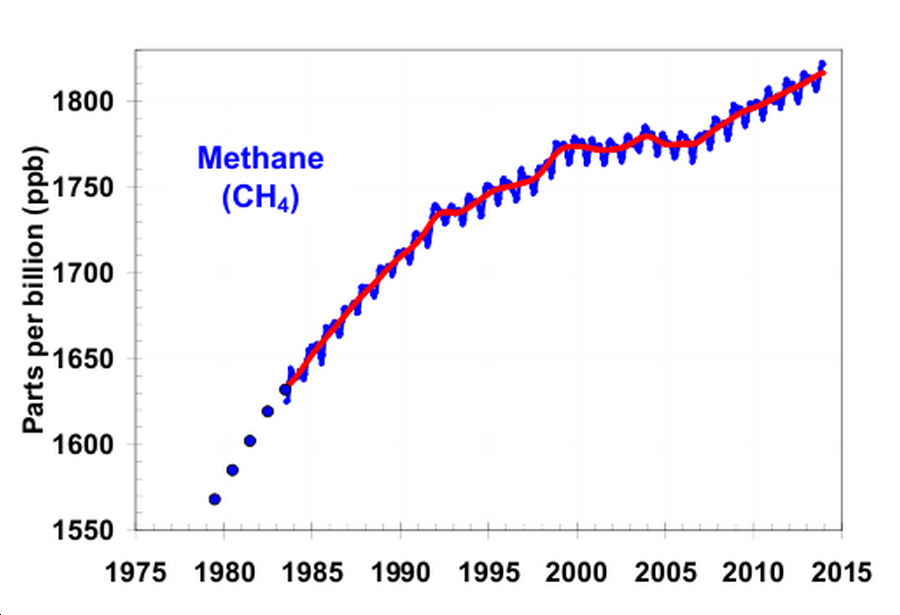 Figure 2. Global average abundance of atmospheric methane concentration (ppb) continues to increase. The trend is based on weekly air sampling from a globally distributed network of sites. (Data courtesy of the National Oceanic and Atmospheric Administration (NOAA), 2015).

Our planet has multiple ways of removing the methane it produces. These strategies are known as “methane sinks”. The largest methane sink is the atmosphere, specifically the troposphere, where methane reacts with free hydroxyl (-OH) radicals to create water vapor and carbon dioxide. A second sink exists in the form of methane-oxidizing bacteria (MOB). Also known as methanotrophs, these dynamic prokaryotes have been the focus of Dr Tavormina’s research since arriving at Caltech in 2006.

Unlike typical bacteria, MOB possess extensive, intra-cytoplasmic membrane stacks on which they metabolize methane. In doing so, they accumulate granules where carbon byproducts are stored, often in the form of polyhydroxybutyrate (PHB, a type of plastic) and glycogen. Figures 3 and 4 show the unique cellular and biochemical properties of methane-oxidizing bacteria. 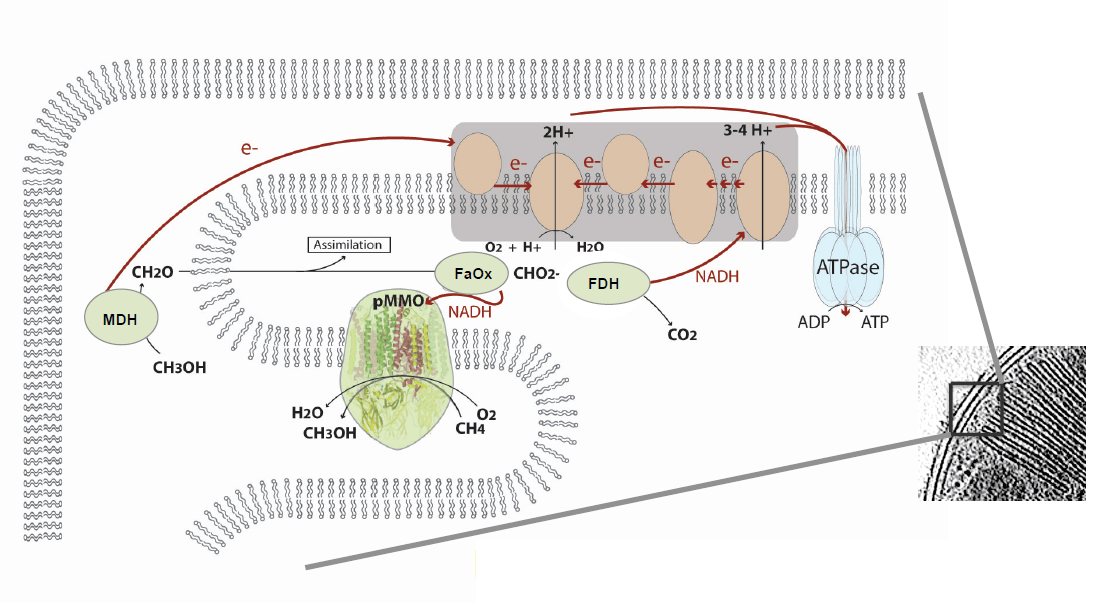 Figure 4. Biochemistry of intra-cytoplasmic membrane stacks in MOB. Methane monooxygenase (MMO) converts methane and oxygen into methanol (CH3OH) and water. From there, methanol is converted into formaldehyde (CH2O) by methanol dehydrogenase (MDH). Here, formaldehyde can either cross the membrane, where it will accumulate in the cytoplasm as biomass, or it can be further oxidized by formaldehyde oxidase (FaOx) and formaldehyde dehydrogenase (FDH). Further oxidation results in CO2 production and electron deposition onto a respiratory chain. ECM inset courtesy of the Jensen lab at Caltech.

Based on these properties, Dr. Tavormina believes MOB could one day be used as a powerful sustainability strategy. “With MOB, we could capture the methane we produce before it reaches the atmosphere, use it to produce organic compounds such as plastics and methanol, all while sustaining diverse communities with organic carbon that travels up the food chain”. She adds, “If you look at all the carbon that’s available and realize that the bulk of this carbon derives from methane, you see that these bacteria are actually very powerful in what they can offer us.”

To fully realize MOB’s methane mitigation potential, Dr Tavormina intends to obtain a deeper understanding of their diversity. “They are the single largest biological methane sink on the planet, yet we know very little about them because they are largely uncultivated and their research is largely underfunded”, she says. In fact, for decades there were only 2 known lineages of MOB that were identifiable in environmental samples. That is no longer the case, however, as Tavormina and her team have developed a novel method they call “functional gene tag sequencing” (FGTS), which has led to significant advances in the discovery of new methane-oxidizers.

An integral part of FGTS is the primer set that Tavormina’s team uses, which they consistently design and purchase through IDT. Their primers bind to highly conserved regions of the pmo (particulate methane mono-oxygenase) genes, which encode the enzyme that converts methane to methanol in MOB (see MMO, Figure 4). The primer-binding regions immediately flank an intergenic space between genes pmoC and pmoA. PCR amplification with these primers generates a fragment that is specific to MOB lineage and compatible with high throughput sequence analysis. These properties make the fragment an ideal target for recovering diverse lineages in environmental samples.

Tavormina explains, “When we amplify, we get a bulk amplicon that is comprised of fragments of different lengths. And by including a fluorescent tag on one of the primers, we can separate these on an electropherogram to get a fingerprint of populations from an environmental sample”. Figure 5 shows the novel primer locations used in the FGTS method.

Tavormina and her team use their primers to classify microbes in a wide range of environmental samples, both marine and terrestrial. Table 1 outlines her diverse samples.

In addition to FGTS, the group also performs extensive geochemical analysis on these samples. By combining the information of these 2 approaches, Tavormina and her colleagues determine nutrient regimens for novel MOB lineages. They often see that specific geochemical properties of an environment drive MOB diversity, as many of the new lineages discovered are well adapted to their unique habitats. For example, Tavormina has found that some MOB lineages thrive in high methane, low oxygen environments, while others thrive in the opposite setting—low methane, high oxygen environments [2].

Many of the new lineages that Tavormina’s group identifies in their environmental samples are phylogenetic mysteries, not yet cultured. To put them into phylogenetic context, Tavormina integrates their FGTS data with an in-house 16S rRNA tag database, which her group has constructed using 16S rRNA primers from IDT. In doing so, the researchers gain insights into the relationships between canonical and unusual methane oxidizers, and their context within the total microbial community. Tavormina’s work has produced incredible advances in this area, as illustrated in Figure 6. 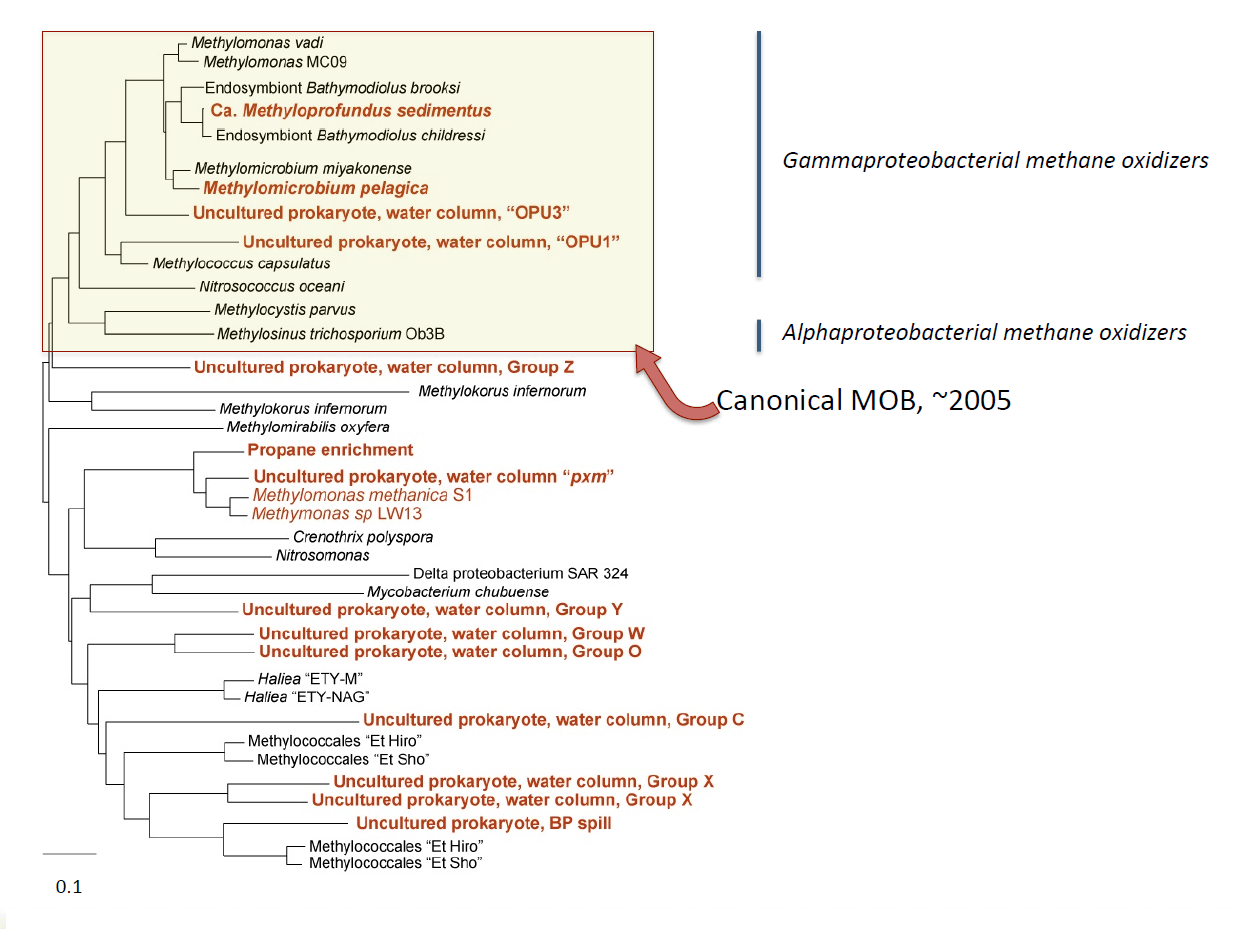 Figure 6. Expansion of methane-oxidizing bacteria lineages. The yellow box highlights known MOB diversity in 2005. All other lineages were discovered between 2005 and 2015. Lineages discovered by Dr. Tavormina at Caltech are shown in red text, lineages found by other researchers are shown in black.

In a single decade, knowledge of MOB diversity has doubled what it was in 2005, which was the culmination of research over many decades. This impressive advance is largely due to Tavormina and her team’s innovative methods. They have uncovered nearly half of all known MOB lineages, and expect that trend to continue. As Tavormina says, “There is a huge diversity of methane oxidizing potential out there, we have yet to even scratch the surface of it”.

In 2015, our San Diego manufacturing facility received its ISO 14001 certification. As part of the celebration, IDT awarded Dr Tavormina with an inaugural ISO 14001 Sustainability Award. The Sustainability Award, which attracted top talent throughout the region, focuses on biodiversity research in southern California and provides the winning researcher with $14,001 in oligo credit.

This year’s award will allow Tavormina’s team to acquire the hundreds of primers needed for their FGTS methods (Figure 5), as well as fluorescent probes for fluorescent in situ hybridization (FISH) integration into their experimental methods. They expect FISH to provide visualization of microbes that are identified by FGTS.

Recently, Tavormina gave us an update on her research. “Our initial work on this project has been promising. The primers have been excellent and using the fluorescent probes in FISH has made our investigation more powerful, as we now have 2 independent experimental approaches to identifying MOB in environmental samples. IDT has been fantastic to work with”.

Overall, Tavormina believes that the forthcoming information on methane oxidizing bacteria can guide legitimate plans to a more sustainable future. There is little doubt that our current methane production is a threat to our planet’s health, but as Tavormina says, “We can look to nature’s toolbox for ways to mitigate the emissions we are responsible for. There is a diversity of microbes literally under our feet. Learning about them, and understanding the geochemistry that drives them, is essential to moving forward with efforts to reduce our footprint.” 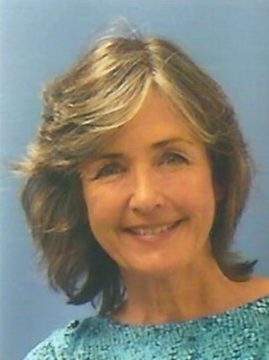 After earning a B.S. in Biological Sciences from Purdue University in 1988, Dr Patricia Tavormina received her PhD in Genetics from the University of Wisconsin, Madison, in 1994. That same year, she joined Dr John Wasmuth’s laboratory at the University of California, Irvine, as a Postdoctoral Scholar, where she identified neonatal lethal disease genes. In 2006, Dr Tavormina began working with Dr. Victoria Orphan at the California Institute of Technology. The Orphan lab studies methane cycling, in natural contexts such as deep sea methane seeps, as well as anthropogenic events such as the 2010 BP oil spill. Since arriving at Caltech, Dr Tavormina has developed expertise in methane oxidizing bacteria using diverse experimental approaches including novel imaging techniques, cutting edge sequencing technology, cultivation methods, and biochemical analysis including protein purification and characterization.

Outside of her research, Dr Tavormina devotes significant time to scientific service and educational outreach. She is a frequent speaker at community events and community colleges throughout California and also acts as a mentor for high school students, through organizations including HYPE (Helping Young People Excel) and SCJAS (Southern California Junior Academy of Science). Dr. Tavormina maintains a teaching presence in Southern California as well, with instructional roles within the community college district and the California State University system.