This article discusses traditional PCR-based methods for creating a specific mutation in a known sequence in vitro. Site-directed mutagenesis is an established method that can generate the same types of mutations quickly and efficiently, using custom, synthetic dsDNA fragments.

Site-directed mutagenesis is an in vitro method for creating a specific mutation in a known sequence. While often performed using PCR-based methods, the availability of custom-designed, synthetic, double-stranded DNA (dsDNA) fragments can drastically reduce the time and steps required to obtain the same sequence changes.

Here, we describe several PCR-based methods for site-directed mutagenesis. Primers designed with mutations can introduce small sequence changes, and primer extension or inverse PCR can be used to achieve longer mutant regions. Using these site-directed mutagenesis techniques allows researchers to investigate the impact of sequence changes or screen various mutants to determine the optimal sequence for addressing the question at hand. The IDT Mutagenesis Application Guide provides more details on these approaches.

Read our follow-up article, Site-directed mutagenesis—improvements to established methods, to learn how to use a simplified, alternative approach for generating similar mutagenesis designs quickly with custom-designed, dsDNA fragments.

When PCR is used for site-directed mutagenesis, the primers are designed to include the desired change, which could be base substitution, addition, or deletion. The mutation is incorporated into the amplicon during the PCR protocol, replacing the original sequence. Mutations introduced by PCR can only be incorporated into regions of sequence complementary to the primers and not regions between the primers [1]. The PCR protocol for base substitutions involves using primers containing the base changes of interest that occurs as a non-complementary break in the primer sequence which will replace the original sequence (Figure 1). 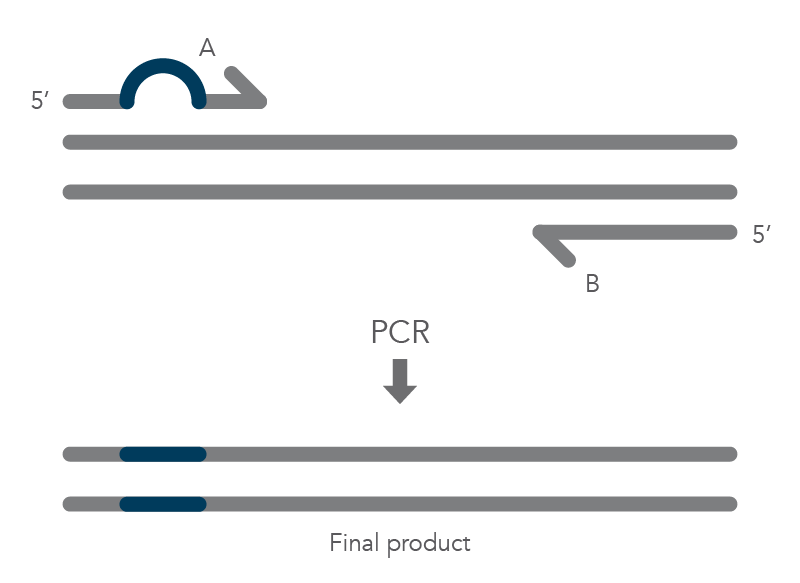 Figure 1. PCR for base substitutions. Primers containing the base changes of interest as a non-complementary break in the primer sequence (indicated by the blue bubble) are used in a PCR reaction. As the primers are extended, the resulting amplification product includes the non-complementary bases, which replace the original sequence.

The PCR protocol for terminal additions involves adding to the sequence at the 5’ end of primer B, which is used with the complementary primer A for amplification of the new PCR product that contains the terminal additions (Figure 2). 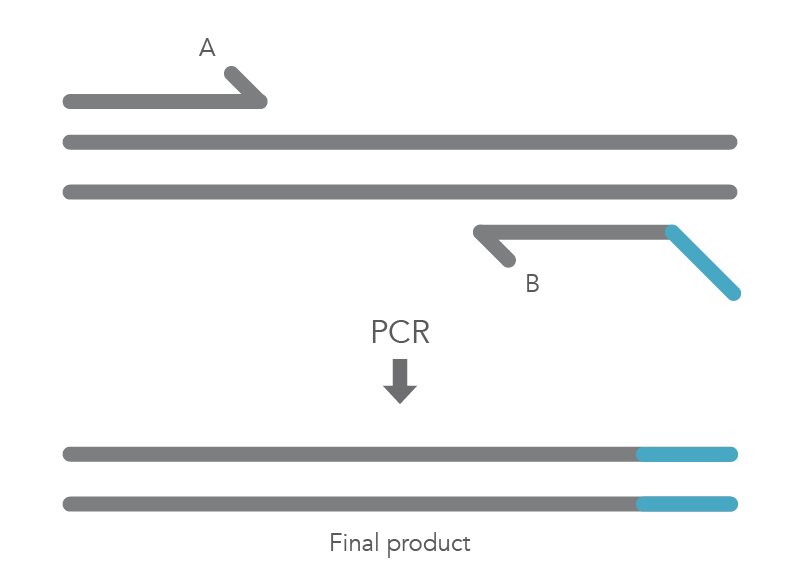 Figure 2. PCR for terminal additions. An Ultramer™ Oligonucleotide primer containing an addition to the sequence on the 5’ end of primer B is used along with the complementary primer A to amplify a new PCR product containing the terminal addition.
The PCR protocol for deletions involves using a primer that contains nucleotides complementary to the regions flanking the area where the deletion will occur (Figure 3). The PCR product will be shorter due to the deleted sequence. 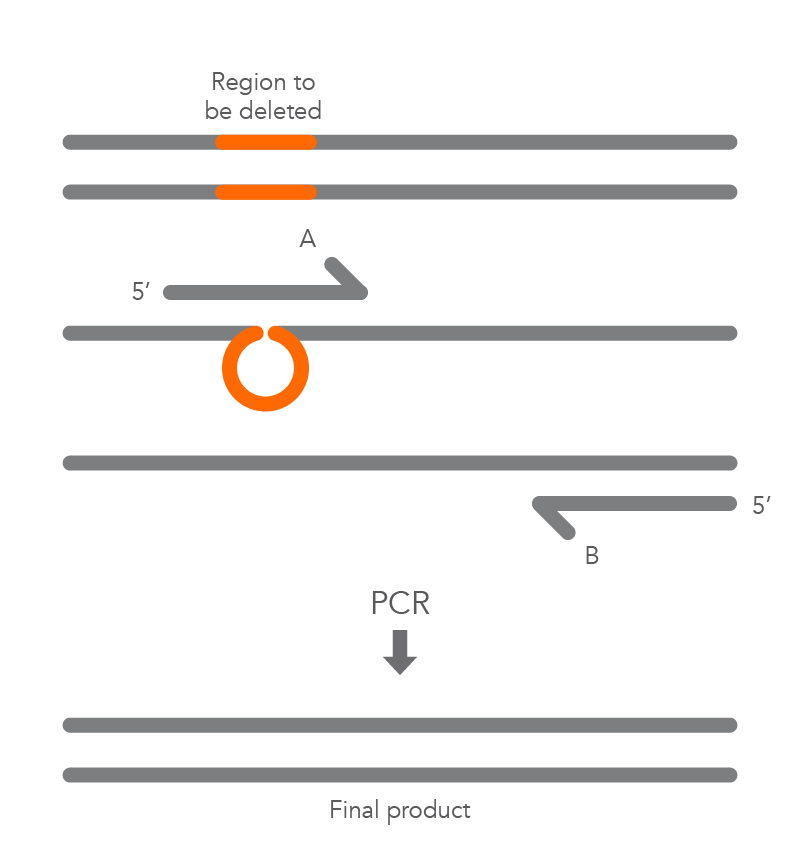 Figure 3. PCR for deletions. Primer A contains nucleotides complementary to the regions flanking the area to be deleted (orange). During PCR, primer binding will cause a region of the template to loop out and amplify only the complementary region covered by the primers. The final product is shorter because it is missing the deleted sequence.

Site-directed mutagenesis by primer extension involves incorporating mutagenic primers in independent, nested PCRs before combining them in the final product [2]. The reaction requires flanking primers (B and C) to be positioned on either side of the region to be deleted, so that this region does not become part of the AB and CD fragments. The B and C primers include 5’ tail sequences that are complementary to the segment of target DNA upstream of the deletion for primer C or downstream of the deletion for primer B. The final two PCR amplicons have complementary overlapping regions so that the AB fragment will hybridize to the CD fragment in the second PCR reaction. Longer insertions can be incorporated by using especially long primers, such as IDT Ultramer™ oligonucleotides. Since the wild-type sequence is not amplified, the final AD product will not contain the deleted fragment (Figure 4). 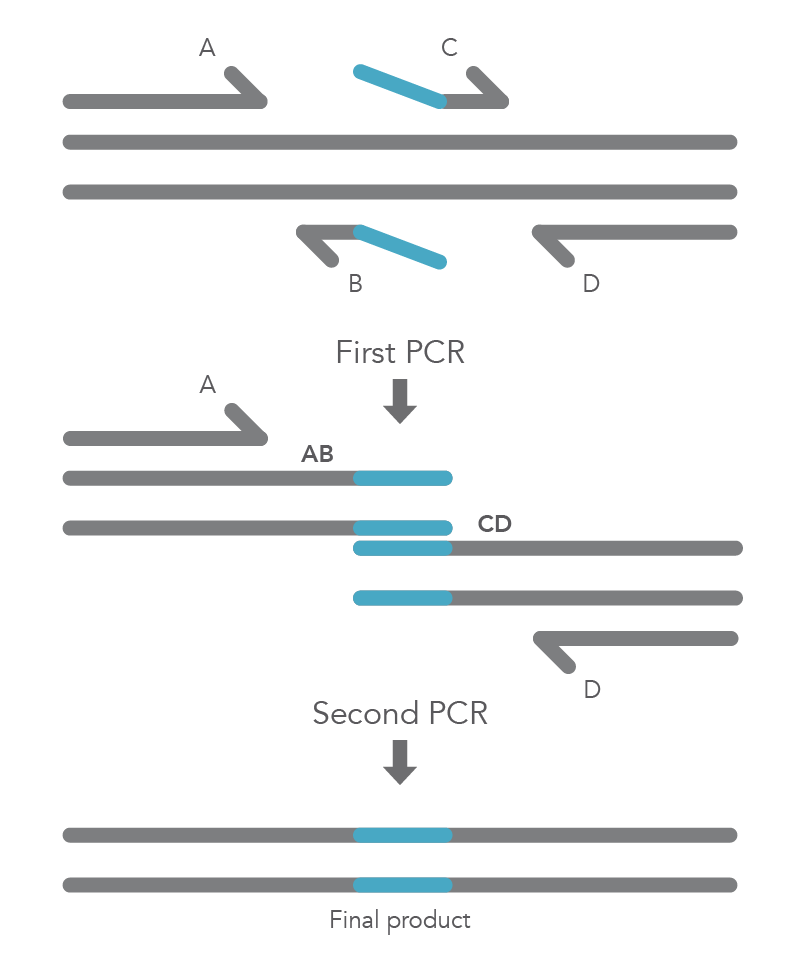 Figure 4. Primer extension for insertion. Primers B and C contain the sequence that will be inserted (indicated by the blue line). The first round of PCR uses two reactions with primer pairs A/B and C/D. The two resulting PCR products are mixed with primer pair A/D for the second round of PCR. The overlapping regions of the two, first-round PCR products allow the strands to hybridize, and the second round of PCR creates the final, full-length product with the desired insertion.

To create a deletion, the internal primers, B and C, are positioned at either side of the region to be deleted to prevent it from being incorporated within fragments AB and CD from the first round of PCR. The complementary sequences at the ends of these fragments, created by primers B and C, enable hybridization of AB to CD during the second round of PCR, and the final product with the desired deletion (AD) is created (Figure 5). 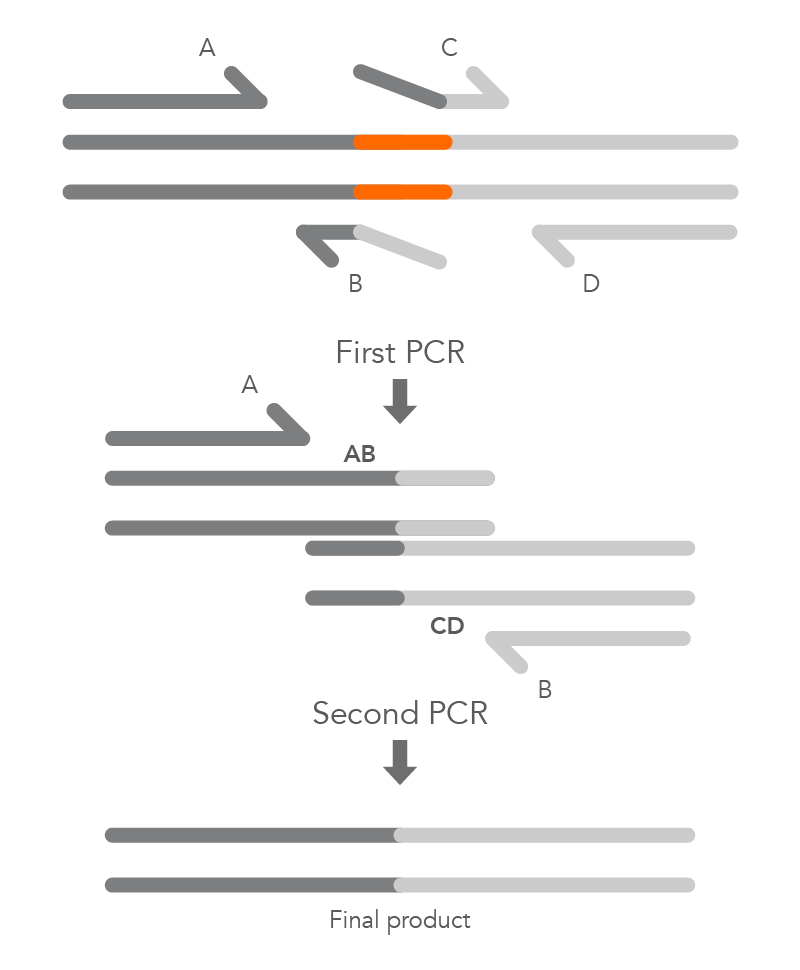 Figure 5. Primer extension for deletions. Primers B and C are located on either side of the sequence to be deleted (orange) and include sequences from both sides of the deletion (indicated by dark gray and light gray tails). These sequences will allow them to overlap with the other fragment after the first round of PCR. The first round of PCR uses primer pairs A/B and C/D. The two resulting PCR products are mixed with the primer pair A/D for the second round of PCR. The overlapping regions of these two, first-round PCR products allow the strands to hybridize, and the second round of PCR creates the final, full-length product with the desired area deleted.

Inverse PCR enables amplification of a region of unknown sequence using primers oriented in the reverse direction [3]. An adaptation of this method can be used to introduce mutations in previously cloned sequences. Using primers incorporating the desired change, an entire circular plasmid is amplified to delete (Figure 6), substitute (Figure 7), or insert (Figure 8) the desired sequence. 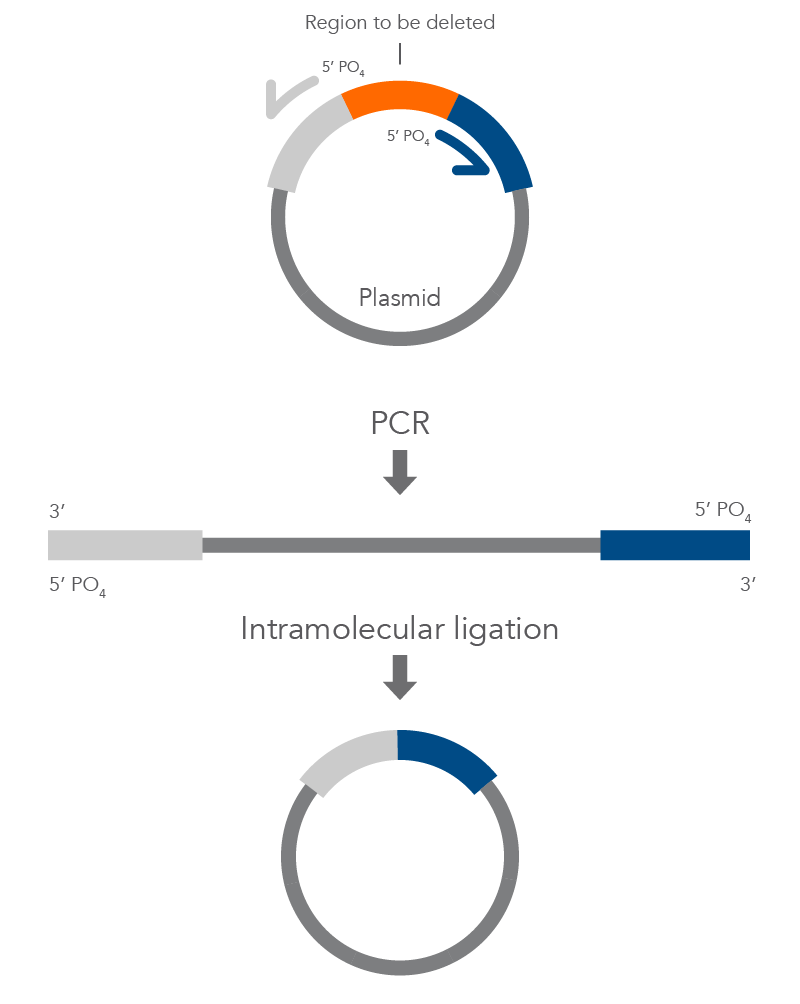 Figure 6. Inverse PCR for a deletion. This method uses primers that hybridize to regions on either side of the area to be deleted. In this case, the primers contain 5’ phosphorylated ends, allowing the two ends to be ligated together following amplification. PCR with a high-fidelity DNA polymerase leaves blunt ends and creates a linearized fragment that is missing the deleted region. This fragment is then circularized by intramolecular ligation and the resulting plasmid is transformed into host bacteria for propagation. 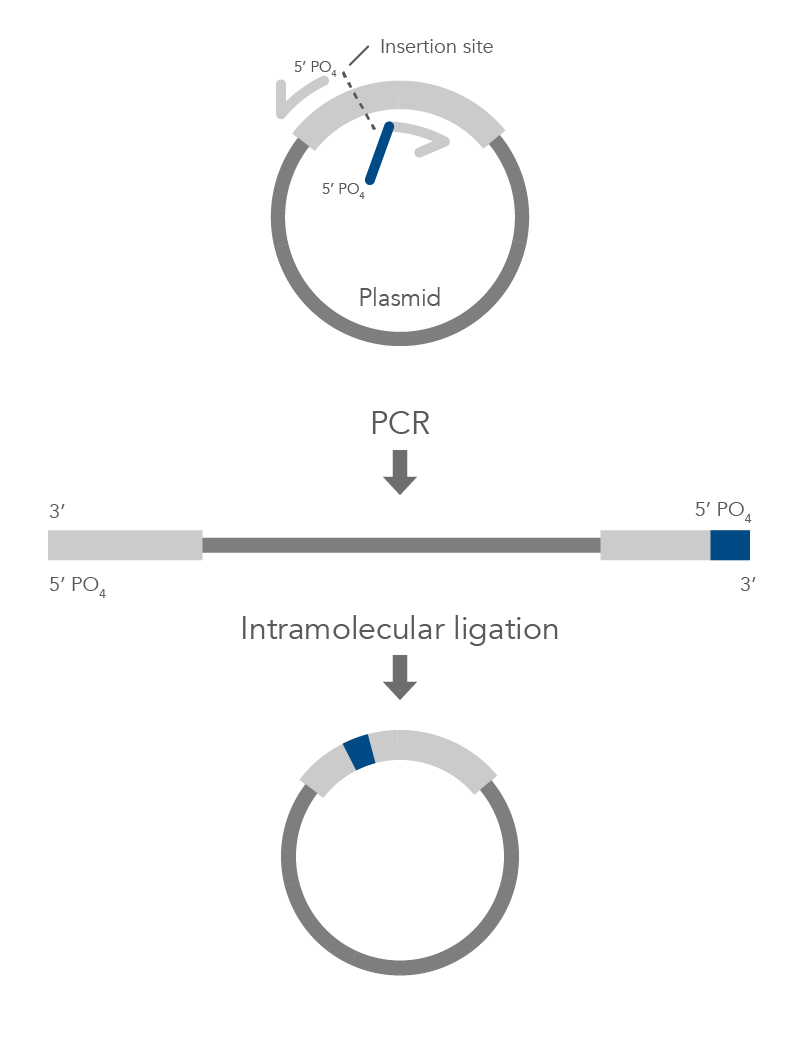 Figure 8. Inverse PCR for an insertion. The primers are lined up back-to-back on either side of the area where the new sequence will be inserted (indicated by the black, dotted line). One primer contains the additional sequence that will be inserted (indicated by the blue line). Both primers contain 5’ phosphorylated ends to facilitate ligation following amplification. PCR creates a linearized fragment containing the new sequence. The plasmid is then circularized by intramolecular ligation and transformed into host bacteria for propagation. 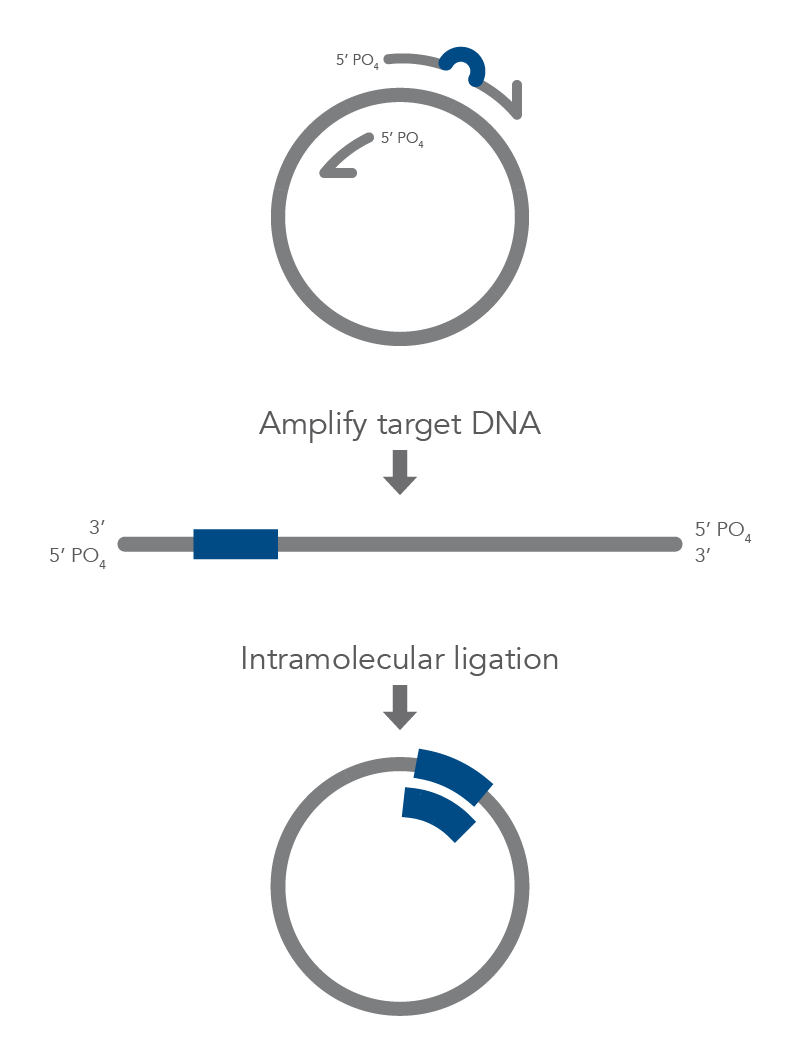 Figure 7. Inverse PCR for a substitution. One of the two primers contain the mutation of interest (indicated by the blue bubble). In this case, both primers contain 5’ phosphorylated ends to allow the two ends to be ligated together following amplification. PCR is used to amplify the entire circular plasmid to create a linear template that contains the substituted sequence. This fragment is then circularized by intramolecular ligation and the resulting plasmid is transformed into host bacteria for propagation.

For research use only. Not for use in diagnostic procedures. Unless otherwise agreed to in writing, IDT does not intend these products to be used in clinical applications and does not warrant their fitness or suitability for any clinical diagnostic use. Purchaser is solely responsible for all decisions regarding the use of these products and any associated regulatory or legal obligations. Doc ID: RUO22-1230_001