Need an oligo with a poly G run?

When trying to order an oligo with several sequential guanine residues, you will often receive a warning to the effect: 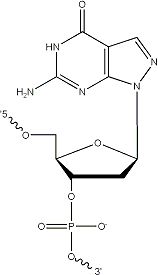 Including a Super G modified base in place of one of a series of G residues in an oligo sequence:

To order, enter your sequence with the IDT ordering symbol (shown above) in the desired location within your sequence. Oligos containing Super G bases can be ordered with HPLC purification or as standard desalt, providing that other modifications in the sequence do not require HPLC.

Learn about other modifications to facilitate your research

See what other modifications are available from IDT. You can find a list of standard modifications we make to oligonucleotides on the Modifications page of our online catalog. And if you don’t find what you are looking for, just send us a request. We often synthesize special, non-catalog requests. Contact us at noncat@idtdna.com.