Multiplex qPCR—how to get started

Learn how multiplex qPCR can save sample, reagent cost, and time. The article provides recommendations for multiplex qPCR assay design and experimental setup.

In multiplex qPCR, multiple targets are amplified in a single reaction tube. Each target is amplified by a different set of primers, and a uniquely-labeled probe distinguishes each PCR amplicon. Thus, you can measure the expression levels of several targets or genes of interest quickly.

To determine whether multiplexing is appropriate for your experiments, consider sample size, reagent cost, and time spent. Multiplex qPCR minimizes the amount of starting material required, which can be of critical value when samples are limited and/or precious. Even when starting material is plentiful, multiplexing can save time by increasing throughput and decreasing sample handling. It can also save on the cost of reagents and other consumables.

As multiple primers and probes must be designed for this application, we strongly recommend use of a design tool with a validated algorithm. Suitable tools can be found in the SciTools® applications section of the IDT website. For best results:

Step 1. Select primer and probe sequences. If you are working with human, mouse, or rat targets, IDT has done the work for you by providing a library of predesigned assays (primer and probe sequences) for virtually every sequence in these genomes. This powerful design engine identifies assays using up-to-date sequence information. These assays have been individually BLAST searched across the transcriptome thereby reducing cross reactivity. Select a few assays for each gene of interest for these species, using the PrimeTime® Predesigned qPCR Assay Selection Tool. If you are working with a species other than human, mouse, or rat, or want to force certain custom design criteria, use the PrimerQuest® Tool.

Step 2. Analyze primer and probe sequences. Use the OligoAnalyzer® Tool to identify primer/probe hairpins, homo- or heterodimers, or any primer/probe complementarity across the different assays to be used in the same multiplex qPCR experiment. Avoid extensive 3’ overlap (greater than 4 bases) between primers, otherwise the primers can be consumed in nonproductive amplification. Often, shifting the primers over a few bases will reduce the overlap.

Step 3. Always test assay efficiency. Run each assay in singleplex reactions before conducting multiplex qPCR. This is important to determine that the Cq values obtained are real and not artificially reduced by the multiplex reaction.

Table 1. Suggested quenchers for use in multiplex qPCR assay probes. Additional dyes are available from IDT. Note that you must verify that your qPCR instrument is calibrated for the dyes you choose, and if not, you must perform calibration or change your choices. For more information on dye spectral emission and excitation values, go to www.idtdna.com/catalog/ Modifications/Dyes.aspx.
1 NHS ester
2 The TEX615 spectrum overlaps with that of ROX; therefore, TEX615 should not be used in a platform that requires a ROX passive reference or with master mixes containing high concentrations of ROX dye. 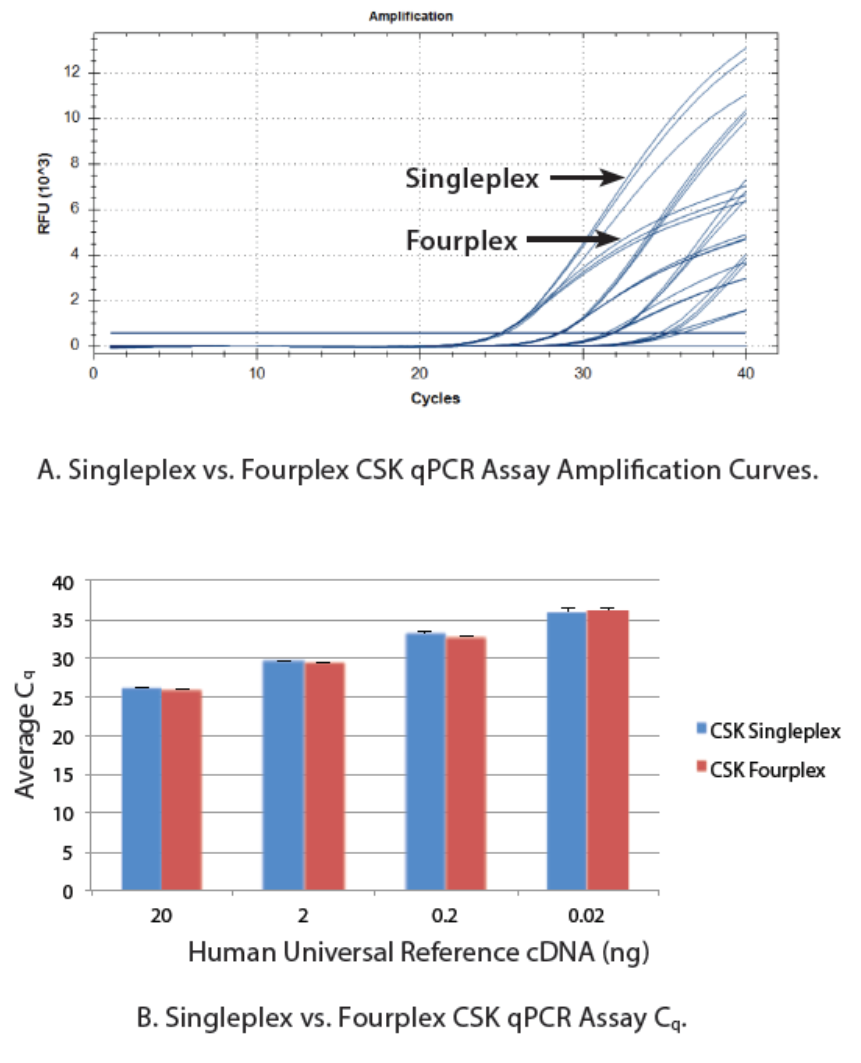 The experimental design for multiplexing is more complicated than for single-reaction qPCR. Amplification of the multiple targets in a single sample can be influenced by factors including gene expression levels, primer interactions, and competition for reaction reagents. Therefore, careful primer and probe design and optimization of amplification are critical.

Master mix. The effects of number of targets, target abundance, and amplicon length on the consumption of reaction components are greater for multiplex reactions than singleplex. If any reaction components are limiting, multiplex reactions can show either significant Cq delays in the case of qPCR, or total loss of PCR products, especially for the targets of lowest abundance.

Master mixes specifically formulated for multiplexing are available commercially. When a homemade master mix optimized for singleplex qPCR is being adapted for multiplex reactions, give careful consideration to adjusting the concentration of reaction components. A multiplex reaction will require at least twice as much polymerase as the minimum amount previously titrated for a singleplex qPCR. Additionally, if dNTPs were not in excess for the singleplex reaction, the dNTP concentration will have to be increased. The increased total amount of nucleic acid in the reaction (e.g., from adding additional dNTPs as well as primers/probe, or by generating more template) will decrease the free Mg2+ available for the polymerase, requiring adjustment to the Mg2+ concentration.

Scientists at IDT measure siRNA target knockdown using at least 2 different qPCR assays located at different positions within the target gene. Interrogating a single sample with multiple assays per target gene can identify artifacts, such as retained RNA fragments, that are sometimes seen after siRNA treatment [1]. As an example, Figure 1 shows the results of an experiment where 2 distinct qPCR assays (positions indicated by the red and blue bars on the x axis) were used to measure knockdown of Gene X expression by 120 different Dicer-substrate RNAs (DsiRNAs) [2]. The DsiRNAs were designed to target different regions of Gene X (indicated by the colored x axis). Multiplex qPCR made it possible to run the 2 assays simultaneously along with several normalizers, while minimizing use of sample, reagents, and lab consumables. In this particular scenario, results from the 5’ and 3’ qPCR assays were significantly different, with the 3’ qPCR assay providing more consistent data from the series of DsiRNAs used.

Figure 1. Results from a single qPCR assay can be difficult to interpret. In this experiment, a set of 120 Dicer-substrate RNAs (DsiRNAs) were used for RNAi targeting of the 5’ UTR, coding sequence (CDS), and 3’UTR of “Gene X” mRNA; their positioning is indicated by the colored X axis bar. mRNA knockdown was measured using 2 qPCR assays, one amplifying a region near the 5’ end of the coding sequence of “Gene X” (Assay 1, red diamonds), and the other amplifying a fragment in the 3’ UTR (Assay 2, blue circles). The percentage of “Gene X” mRNA detected by Assay 1 varies, depending on the DsiRNA target site. These data demonstrate that when DsiRNAs that targeted more 3’ “Gene X” positions were used, the expression levels detected by the 5’ and 3’ qPCR assays were significantly different. This result exemplifies the importance of using more than one qPCR assay per target to identify one that will provide a consistent measure of mRNA expression knockdown. Multiplex qPCR is an efficient, cost-effective method for analyzing several such assays in a single reaction.