Oligopaints—visualizing the three-dimensional organization of the genome

Prior research has shown that chromosomal positioning within the nucleus—whether, for example, a gene is adjacent to the nuclear membrane, or one chromosomal region is near another—can influence gene expres­sion [1−5]. Such localization can also affect how and where chromosomal rearrange­ment occurs—chromosomal breakage followed by rejoining at incorrect positions can lead to disease [6].

To better understand the three dimensional organization of the genome, scientists in the laboratory of Dr Ting Wu (Genetics Depart­ment, Harvard School of Medicine, Boston, MA, USA) have developed a new tool called Oligopaints for fluorescent in situ hybrid­ization (FISH) imaging of chromosomes [7]. These short, fluorescently-labeled oligonu­cleotides enable single and multicolor visu­alization of genomic regions ranging in size from tens of kilobases to megabases, and can be used in fixed cultured cells, fixed tissue, and on metaphase chromosome spreads. A few design tricks (see below) make these probes particularly appealing—the probes are single-stranded and strand-specific, renewable via amplification, and include a non-homologous “tail” sequence to which a precise number of fluorescent dyes or other labels can be attached. They are also kept short to facilitate entry into the nucleus.

Libraries of hundreds to hundreds of thousands of oligos are designed using OligoArray soft­ware [8] that identifies appropriate genomic target sequences within each chromosome. The researchers use 74-base oligos that have just 32 bases of homology to each target and, impor­tantly, they have mined the entirety of the human, mouse, Drosophila, nematode, and Arabidopsis genomes for suitable Oligopaint targets and made them available through their Oligopaints website; regardless of which genome, the software identifies an average of ~10 targets per kilobase. Pools of identified oligo sequences are synthesized on a solid support and released. Each of the resulting oligos contains the 32-base region of genomic target homology with flanking 21-base priming sequences. One of the am­plification primers contains a 5’ fluorophore and the other contains a nicking site, po­sitioned at the boundary with the 32-base region of homology. After amplification, an enzymatic nicking reaction removes the latter priming sequence, resulting in a 53- base, single-stranded, fluorophore-labeled oligo that can be isolated by denaturing gel electrophoresis.

Researchers can design Oligopaints to target specifically either strand of the chromosomal DNA, which will facilitate studies of transcrip­tion as well as other strand-specific aspects of chromosome biology. These new probes can also be used to simultaneously label a chromosomal region (Figure 1) as well as transcripts from that same region. Finally, hundreds of thousands of oligo probes can be generated in parallel, enabling megabas­es of the genome to be ‘painted’ at a fraction of current commercial costs. 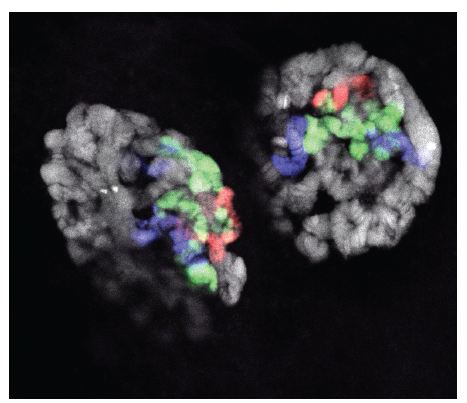 IDT supplied the amplification primers and, in some cases, the libraries of oligos, for de­velopment and testing of Oligopaints. Dr Wu recalls, “While we love the products IDT pro­vides, what I really want to highlight is the scientific discussions and encouragement the IDT scientists gave us. It was helpful for me, and extremely motivating for the people in my lab. Their supportiveness pushed our thinking about the project and reminded us of why we went into science.”