Females of many animal species show mate preference based on attributes like bright coloration, big antlers, or long tails. However, guppies—the small, freshwater fish often seen in home aquariums—are quite unique in that within a single species, different populations and even different individuals can show distinct mate preferences. For this reason, guppies have become a classic model for the evolution of female mate choice.

The wild guppies (Poecilia reticulata) studied by Benjamin Sandkam (Simon Fraser University, British Columbia, Canada) are native to the mountain streams of Trinidad, and have sexually dimorphic coloration—the females are uncolored, while the males show color variation—especially in the presence and size of red-orange markings on the males (Figure 1).

These guppies are only a couple of centimeters long and occur in small streams high in the Trinidadian mountains that are only about 1/3 m deep and 1 m wide. As the streams descend the mountains, they become larger and pass over a series of waterfalls. Below the falls, the water is deeper, and there are larger pools that provide habitat to larger and more numerous predators. It is these areas below the falls that are considered high-predation environments for the guppies, while the areas above the waterfalls are considered low-predation areas, with the falls preventing predators from moving upstream into these areas.

The females prefer to mate with the more colorful, red-orange males, but, interestingly, the extent to which this is true differs across guppy populations within this species, in this region (Figure 2). Generally, females in low-predation sites more strongly prefer red-orange males than those females in high-predation sites. These observations led to questions about the genetic factors that drive evolution of divergent mate selection behavior in guppy populations.

Figure 2. Trinidadian research site provides access to independently evolved guppy populations. (Left) The researchers worked out of the William Beebe Tropical Research Station, which provided access to the 2 study sites, the Marianne and Airipo watersheds, located on the north and south slopes, respectively, of the Northern Range Mountains. (Right) Low-predation sites were located above “barrier” waterfalls, while high-predations sites were located below.

The relationship between color vision and mate choice

Questions about genetic involvement in mate selection intrigued Benjamin Sandkam, a graduate student in Dr Felix Breden’s laboratory (Simon Fraser University, British Columbia, Canada). Ben is building his research career on explaining the evolution of the mechanisms underlying behaviors. He has a particular interest in how mate preferences are passed on across generations. Given that many species do not teach these preferences to their offspring suggests that there is an underlying genetic force that accounts for inheritance of mate preference.

For coloration to play a role in mating decisions, organisms must have the ability to detect and discriminate different colors, commonly called “color vision”. Color vision is accomplished by comparing signals from different cone cells in the retina, which vary in the wavelength of light to which they are most sensitive [1]. The most variable component involved in tuning cone cells is the transmembrane protein called an opsin. Guppies possess 9 different opsins, with 4 separate Long Wavelength-Sensitive (LWS) opsins responsible for red-orange color detection.

Specimen collection took into account time of day and light intensity. The scientists monitored other environmental parameters, including dissolved oxygen concentration, total dissolved solids (water clarity), as well as the water temperature, conductivity, pH, and salinity. Specimens were dissected in the field, and eye tissue samples preserved in RNAlater® Reagent (Thermo Fisher Scientific) and returned to the laboratory for processing. Details regarding experimental design, methods, and analysis can be found in Sandkam, Young, Breden (2015) [2].

The researchers tested whether variation in the ocular sensory system exhibited parallel variation to mate preferences by assessing the differences in allele frequency and expression of LWS opsins. Sandkam used qPCR to generate the expression data for this study. PrimeTime qPCR Assays (IDT) were designed for 9 opsin genes (LWS-1, LWS-2, LWS-3, LWS-R, RH2-1, RH2-2, SWS1, SWS2A, SWS2B), 1 rhodopsin gene (RH-1), and 3 housekeeping genes (β-actin, cytochrome C oxidase subunit 1, and myosin heavy chain), with a primer or probe positioned to span intron-exon boundaries wherever possible. (Interestingly, some of the guppy opsin genes contain no introns, so a thorough DNase treatment of the extracted RNA samples prior to reverse transcription and qPCR was imperative.)

5′-FAM–labeled probes contained the ZEN™ Internal Quencher as well as a 3′–Iowa Black® Quencher. Use of double-quenched probes can decrease fluorescence background and increase signal. Sandkam notes, “Some of the opsin gene sequences, and thus qPCR assays, were very similar. But the PrimeTime qPCR Assays, used in conjunction with the ZEN/Iowa Black Double-Quenched Probes, were really helpful, because they were so specific that I could design locus specific assays based on very small sequence differences across these different loci.” (See Product focus—Double-Quenched Probes, right, for more about this internal quencher.)

Differences in color vision were assessed by measuring the proportion of total opsin expression, taking into account assay efficiency and housekeeping gene expression (Figure 3). Proportional opsin expression provides a measure of color vision, as opsins are the major differentiating character of cone cell types, and color vision is accomplished by comparing the signal from different cone cell types [2–4]. Opsin expression relative to the housekeeping genes showed how the opsins were differentially regulated. Of the various environmental parameters (see above) measured by the scientists, none corresponded with the expression differences of LWS seen in the test guppy populations [2]. 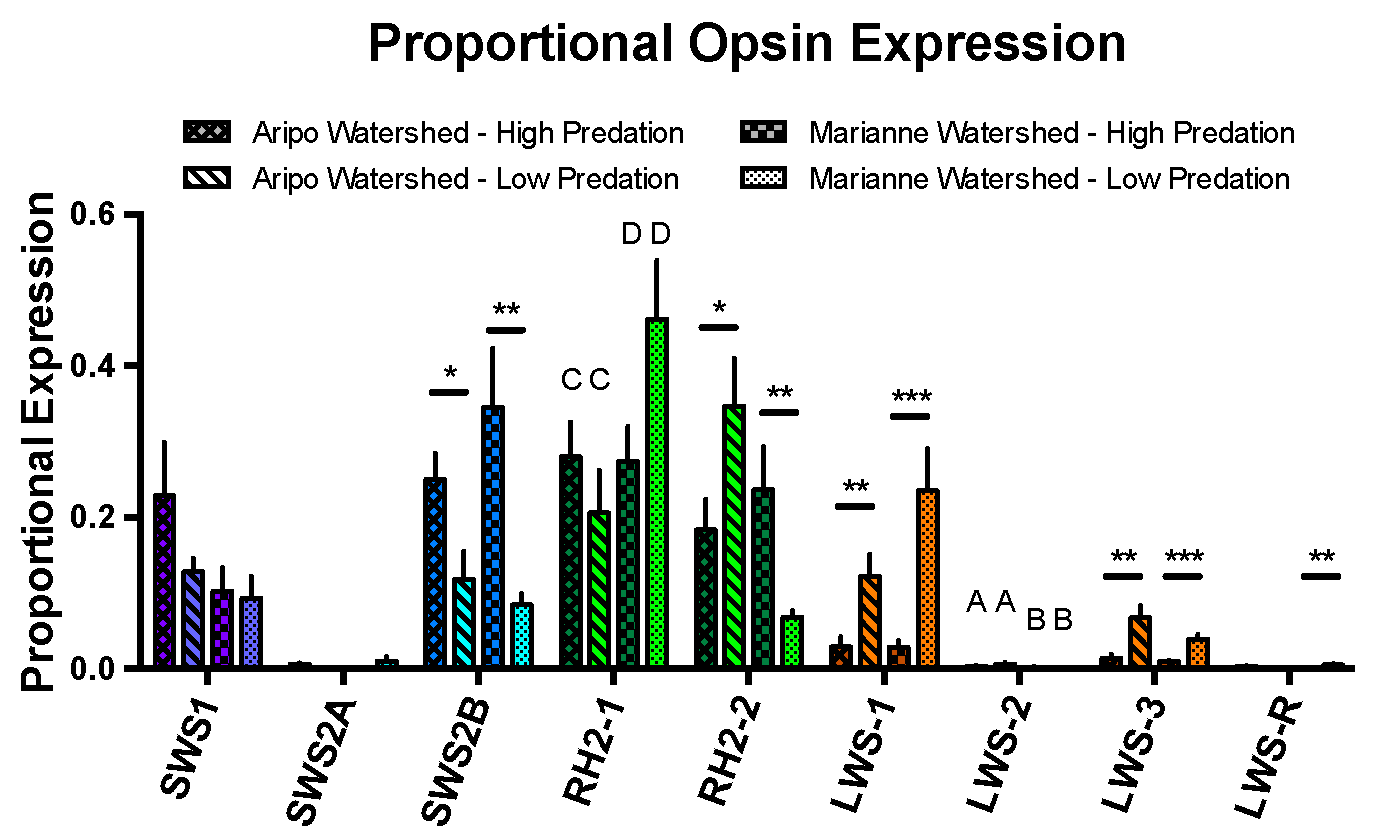 Validation of the sensory exploitation model of population divergence

The researchers used MANOVA and ANOVA statistical analyses of the qPCR data to confirm that color vision varies across guppy populations and that low-predation guppies develop greater color vision for detection of red-orange coloration. Specimens collected from independently colonized watersheds showed that guppies expressed higher levels of both LWS-1 and LWS-3 (the most abundant LWS opsins) in low-predation compared to high-predation populations at a time that corresponds to differences in cone cell abundance. Through additional experiments, the researchers observed that the frequency of a coding polymorphism also differed between low- and high-predation populations. Details of the statistical analysis and allele frequency experiments can be found in Sandkam, Young, Breden (2015) [2]. 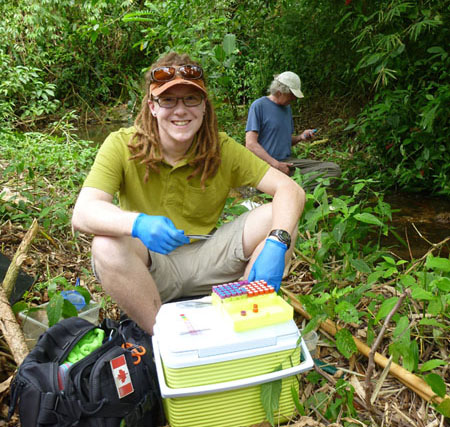 Benjamin (Ben) Sandkam grew up in the suburbs of Chicago and attended the University of Illinois Champaign-Urbana for his bachelor’s degree. There he did research on the visual system of bluefin killifish in the laboratory of Dr Rebecca Fuller. He is currently finishing his PhD in Dr Felix Breden’s laboratory at Simon Fraser University (British Columbia, Canada). The research paper detailing the work described here [2] was selected for the cover of the 2015 February issue of Molecular Ecology.

Dr Felix Breden, PhD, is Professor of Population Genetics and Genomics in the Department of Biological Sciences at Simon Fraser University. Working with toads, beetles, cornborers, and fish, he has applied genetic tools and mathematical models to address species adaptation and behavioral evolution. His laboratory is currently focused on opsin evolution and speciation in guppies. Dr Breden also studies human immunogenetics; specifically, how variability in human immunoglobulin genes can affect susceptibility to autoimmune and infectious diseases, and response to vaccines.