In recent years it has become obvious that the role of RNA structure in regulating biology has been underappreciated. The function of most RNA molecules is dependent on their three-dimensional structure, yet these structures have remained difficult to predict. During RNA folding, some nucleotides become conformationally constrained due to base pairing and interactions with other ligands. Researchers in Dr Kevin Weeks' laboratory (Department of Chemistry, University of North Carolina) are addressing the challenging problem of establishing comprehensive, quantitative structure–function relationships for intact cellular and viral RNAs. Their approach is to develop models for the global structures and long-range architecture of cellular RNAs, and then apply this knowledge to RNA function. We spoke with Drs David Mauger and Nate Siegfried about the novel technologies being developed in their lab to deduce RNA structure and the exciting discoveries that have followed.

Dr Weeks' team has created high-content “chemical microscopes” that use Selective 2′-Hydroxyl Acylation Analyzed by Primer Extension (SHAPE) to enable generic and highly accurate analysis of RNA secondary structure. The basis of the technology comes from the researchers' discovery that the ribose 2′-OH in RNA is reactive to certain small molecules at conformationally flexible, unpaired nucleotides. Based on this, they modify RNA at these positions and identify the unpaired nucleotides using primer extension (or by observing protection from exoribonucleases attack). They can then deduce RNA secondary structure based on the positions of paired and unpaired nucleotides (see below).

“The structure of RNA is central to its function. The goal of the lab is to use these technologies to study biological questions and to make a determination of the structure fast and very easy. SHAPE technology can be used to develop models for RNAs of unknown structure and to study conformational changes and other features of other more established structures.” — Dr Nate Siegfried

Unlike current methods, there is no limit to the size of the RNA that can be analyzed using SHAPE technology. Dr Mauger states, “We recently investigated the structure of authentic HIV genomic RNA—the whole genome, which is approximately 10 kb. The current workflow required us to do it in 500 nt windows, but higher resolution RNA analysis technologies, such as NMR and X-ray crystallography, are often limited in the types and sizes of RNA that they can probe.” The lab has also examined smaller structures, including ribosomal RNAs (rRNAs), which range from 200 to 2600 nt in length. 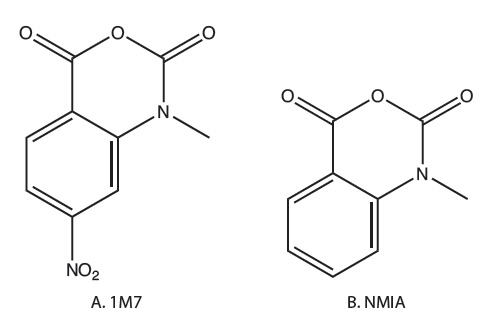 Briefly, the researchers begin with native (folded) RNA and modify it with one of several SHAPE reagents (Figure 2). The reaction is allowed to proceed until the SHAPE reagent is depleted by reaction with RNA or hydrolysis by water [2]. Treatment typically takes a few minutes, with the entire RNA molecule modified in a single reaction. While all SHAPE reagents probe RNA structure, each SHAPE reagent has a unique half-life; e.g., 1-methly-7-nitro-isatoic anhydride (1M7) has a fast reaction time while N-methyl isatoic anhydride (NMIA) reacts more slowly. Researchers in the Weeks lab have used these differences in several ways to investigate the dynamics of RNA folding. For example, differences between 1M7 and NMIA reactivities have been used to identify uniquely constrained nucleotides that have particularly slow dynamics; such a nucleotide within RNase P was found to function as a molecular timer to regulate domain folding [2]. 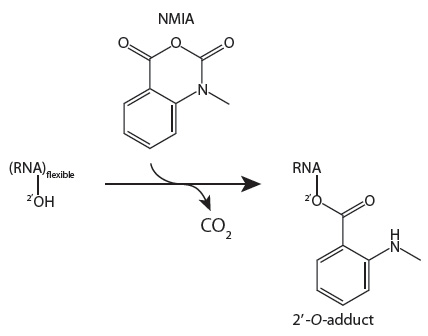 After modification with a SHAPE reagent, the scientists perform primer extension reverse transcription using fluorescently-labeled DNA oligonucleotides (purchased from IDT). The extension reaction terminates when the reverse transcriptase reaches a nucleotide containing a SHAPE adduct at the 2′-OH position. Because the modifications correlate with structure, the ends of the resulting pool of cDNAs map to areas of flexible nucleotides within the RNA.

It can be difficult to obtain primer extension data close to the primer and at the extreme 5′ end of the RNA due to the presence of a large primer peak and noise at the 5′ end of the electropherogram following capillary electrophoresis. Therefore, for smaller RNAs such as transfer RNAs or riboswitch elements, the team uses RNA radiolabeled at the 5′ end in conjunction with a 3′→5′ exoribonuclease [3]. In this case, RNA exoribonuclease degradation continues until the enzyme reaches a modification site; essentially, providing the same data as cDNA primer extension, but for the entire RNA, and encoded in the original RNA rather than in cDNA. The radiolabeled RNA is then analyzed on a sequencing gel. Sites that have been modified by the SHAPE reagents appear as protected RNA fragments of a specific size.

The positions of the cDNA ends are determined by capillary electrophoresis of the fluorescently-labeled cDNAs, which produces peaks that correspond to positions of modification. The intensity of each peak correlates directly with the extent of modification at that position and, therefore, the degree of flexibility at that position. The researchers integrate these peaks and use this information to deduce a reactivity value for each position using custom software called ShapeFinder [4].

SHAPE reactivities at single-nucleotide resolution correlate well with local flexibility in the RNA (Figure 3) and can be used as pseudo–free energy change terms to inform a folding algorithm regarding the probability that a nucleotide is likely to be single-stranded or conformationally restrained. Dr Weeks’ team uses the folding algorithm, RNAstructure [5], and has found that SHAPE-derived pseudo free energy folding dramatically increases algorithm accuracy. 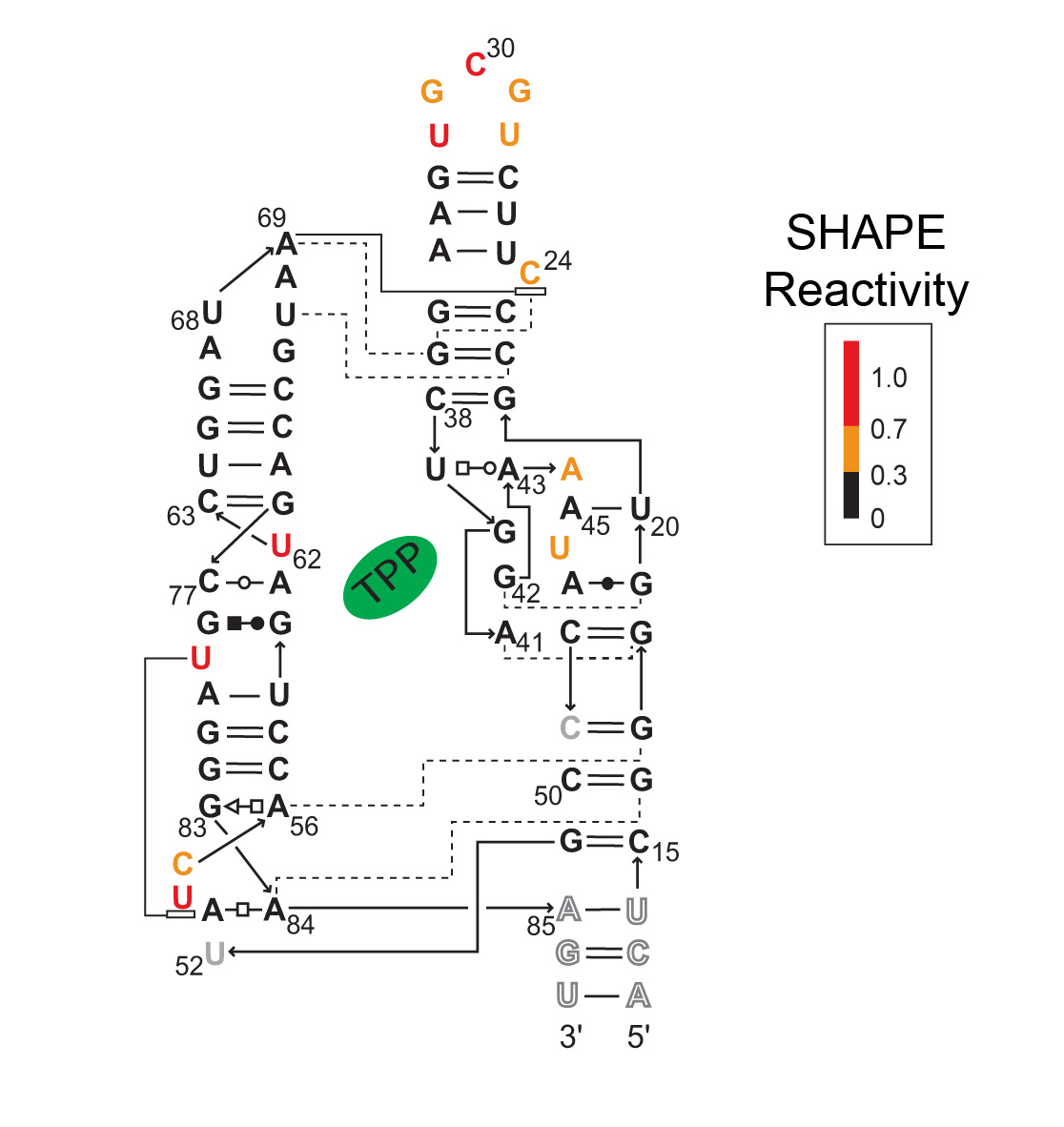 Figure 3. Reactivity of 1-methyl-7-nitro-isatoic anhydride (1M7) at different nucleotides in the Bacterial Thiamine Pyrophosphate (TPP) riboswitch adapter domain. The absolute reactivities of IM7 are superimposed on a secondary structure model of the ligand-bound TPP riboswitch adapter domain. Reactive nucleotides (yellow and red) are located within flexible loops, while unreactive nucleotides (black and blue) are constrained by base pairs, tertiary contacts, or contact with the ligand [3].

Use of SHAPE technology to predict tertiary structure—critical to fully understanding RNA function—is another major focus for the lab. Drs Mauger and Siegfried are addressing this difficult question by blending computational and experimental techniques. The team has continued to improve the algorithms they use to analyze SHAPE data to enhance the capacity for RNA structure prediction. Currently, the low SHAPE reactivity observed in a non-flexible region does not inform what kind of interaction is constraining a given region. Improvements to the algorithms and new classes of SHAPE reagents [6] that differentiate between secondary and tertiary contacts will allow researchers to better predict and identify tertiary structure motifs.

SHAPE modeling can be used to predict specific siRNA target sites that are most effective for down-regulating specific RNA molecules. The Weeks lab focuses on the fact that the structure of the target RNA plays an important role in determining whether a specific siRNA or miRNA will be an effective regulator or have any effect in regulating that target through its interaction with RISC and the target transcript.

A collaboration with Ben Berkhout’s laboratory at the University of Amsterdam, The Netherlands, recently resulted in publication using small RNAs to efficiently down-regulate HIV in cell culture [7]. In this work, Dr Weeks’ team used the predicted genomic structure for HIV-1 obtained from SHAPE analysis to select putative shRNAs. Then, working with the original HIV-1 investigators, Weeks and colleagues tested the efficacy of the designed shRNAs (Figure 4) [7]. 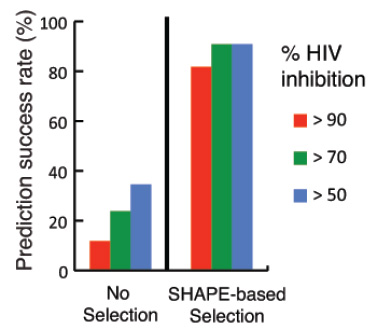 Figure 4. Success rates of SHAPE-predicted shRNAs. Inhibition of HIV-1 production by shRNAs shows that SHAPE-predicted shRNAs are more effective inhibitors than shRNAs without SHAPE selection. The data demonstrate >90% HIV-1 inhibition observed with a prediction success rate >80% for SHAPE-based shRNA selection compared to 16% for shRNAs selected based on sequence conservation only.

Dr Siegfried noted, “We are focused on the actual RNA targets. So the question we are asking is, ‘What makes an RNA the target of RISC?’ There are many biotech companies and laboratories that have developed sets of rules to try to predict this, but largely, they ignore the fundamental structure of the target that they are trying to knock down.” Among the rules the Weeks lab has identified is that the seed regions and sequences directly downstream need to be unstructured to allow interaction with RISC, while the structure of other regions of the RNA play a much smaller role. There also appears to be a small correlation for structured regions being preferred upstream of the miRNA target sequence [7].

SHAPE reagents are small molecules, and many are capable of permeating membranes. The Weeks lab has used this fact to carry out SHAPE experiments directly inside infectious viruses. Upon treatment, the SHAPE reagents penetrate the virus and modify viral genomic RNA. The researchers then extract RNA from the virus and detect the site of modification by primer extension. Using this approach, the researchers can infer both the pattern of RNA base pairing and sites of RNA–protein contacts, such as the interaction between the HIV genome and the nucleocapsid protein, inside an infectious virus [8].

In addition to studying some important RNA targets, the long-term vision of the Weeks lab is to expand SHAPE technology to novel areas. As an example, primer extension fragments are currently run out on a capillary electrophoresis sequencer that provides a window of approximately 300–500 nt of useful data per run. However, since SHAPE reactions can chemically modify the structure of entire RNA molecules in one single reaction, the researchers are working to adapt SHAPE technology for use with next generation sequencing (NGS) technologies. With this approach, an entire RNA or pool of RNAs could be modified and structural information obtained on every nucleotide in a single experiment. Follow the progress of this research here. 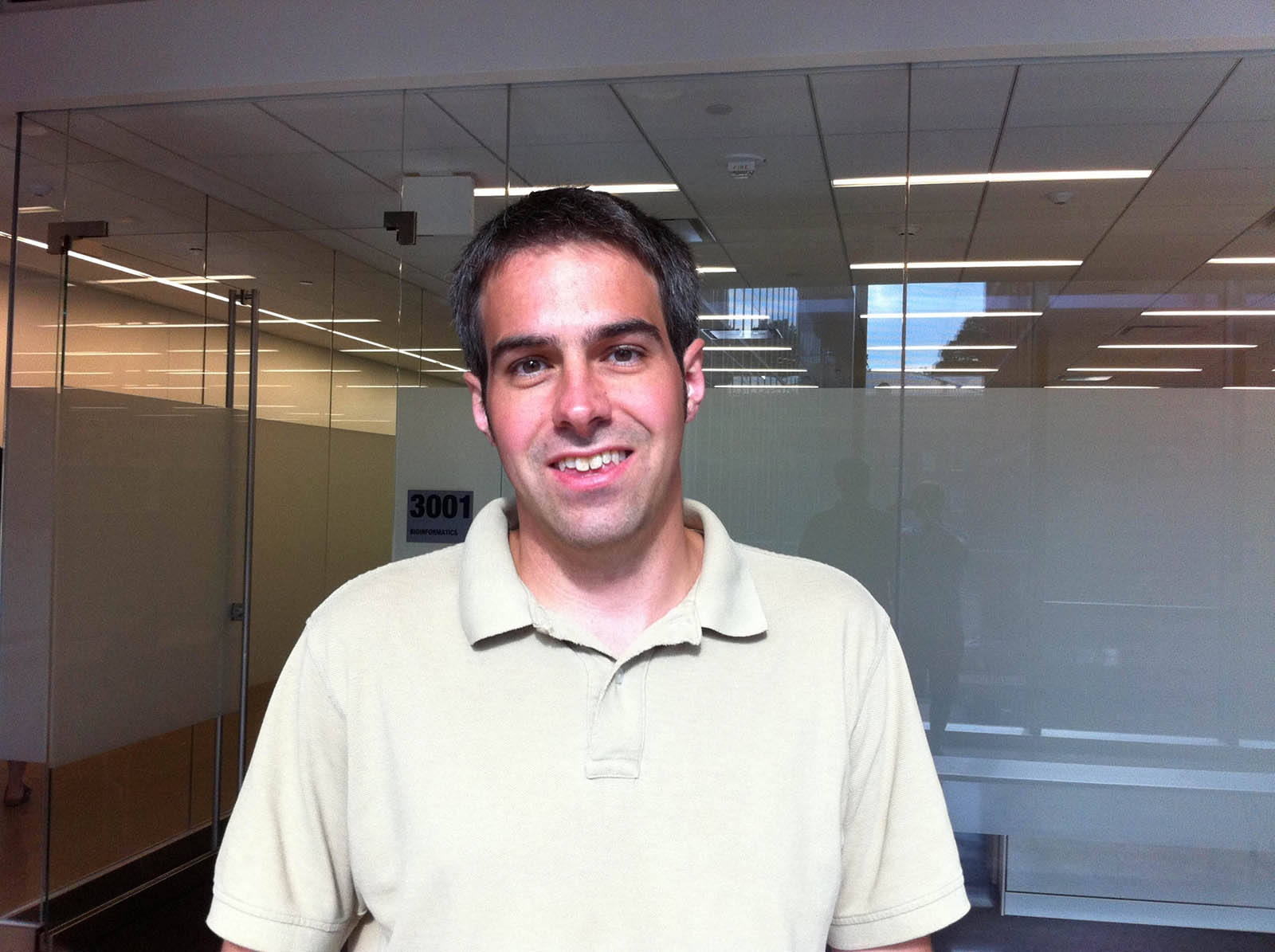 Dr David M Mauger has been a member of the Weeks lab since 2008. He is an American Cancer Society postdoctoral fellow and was previously a UNC Lineberger Comprehensive Cancer Center Postdoctoral Fellow. Dr Mauger obtained his PhD from Duke University, where he studied alternative splicing. He has a keen interest in technology development and is applying that passion in his research using SHAPE. 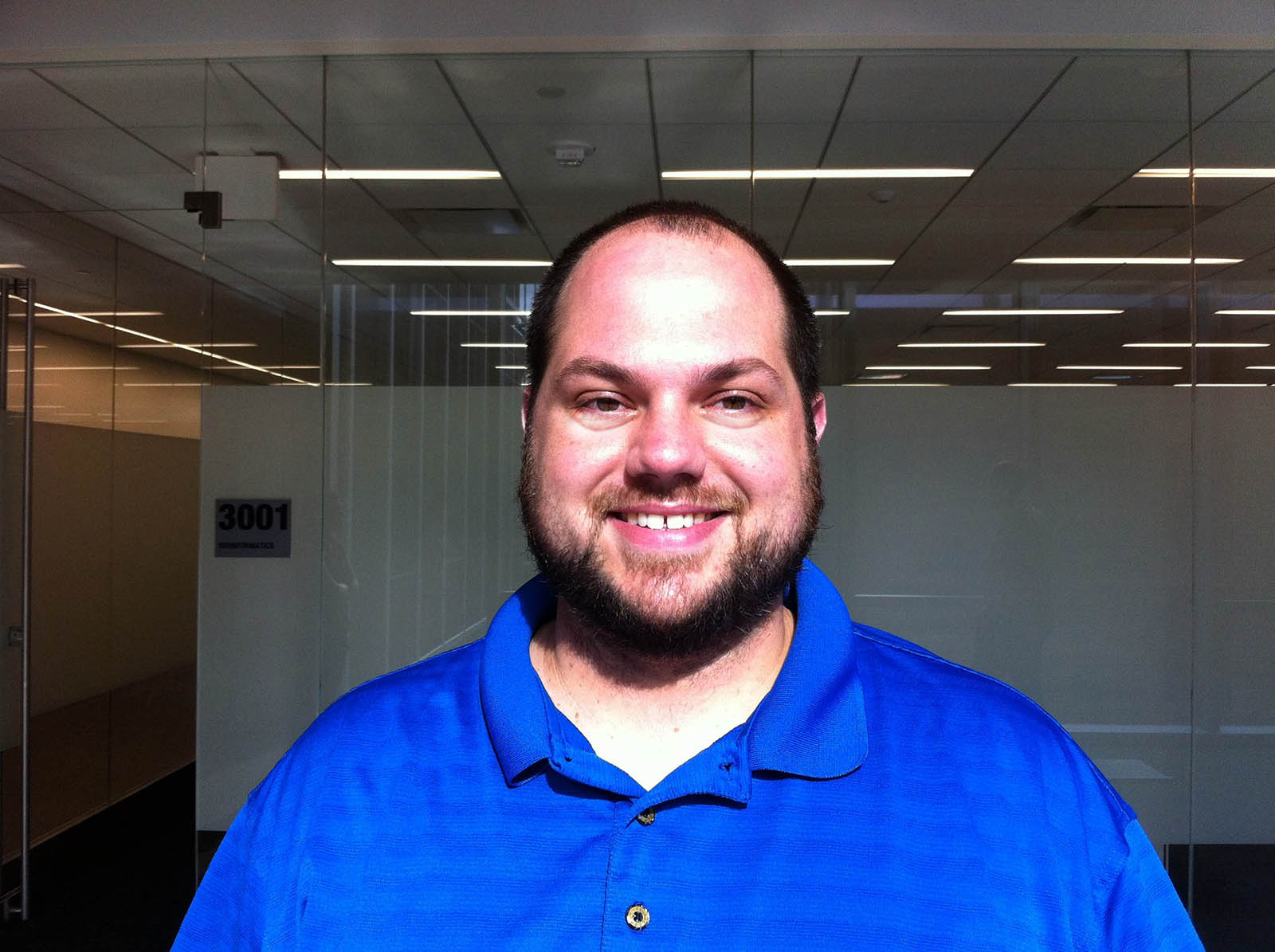 Dr Nate Siegfried is a postdoctoral fellow in the Weeks lab with a fellowship from the National Institutes of Health. Prior to that, he was a UNC Lineberger Comprehensive Cancer Center Fellow. Dr Siegfried obtained his PhD from the Pennsylvania State University, studying thermodynamics of RNA folding and cooperativity in folding. In the future he hopes to run an RNA virology lab as principal investigator.

Dr Kevin Weeks was named Kenan Distinguished Professor in the Department of Chemistry at the University of North Carolina (UNC) in 2011. Dr Weeks began his career as a Fulbright scholar at the Universität Göttingen, Germany. He obtained his PhD from Yale University in 1992, and was a Jane Coffin Childs Postdoctoral Fellow at the University of Colorado from 1992 to 1995 before joining the UNC faculty in 1996.

Dr Weeks is a recipient of several honors and awards, including a National Science Foundation Career Award for 2000–2005; a North Carolina Health and Life Sciences Promise for Tomorrow Award in 2009; and an NIH EUREKA (Exceptional, Unconventional Research Enabling Knowledge Acceleration) Award in September 2011.

Custom RNA oligos with lengths up to 120 bases.