Find out about the 4 highest placing teams in the 2012 International Genetically Engineered Machine competition (iGEM) with a more in depth summary of 2nd place winner, Slovenia. The Slovenia team project engineered an inducible cellular switch (Switch-it System) for delivery of therapeutic drugs directly to target tissues.

Top projects from the 2012 iGEM competition

The International Genetically Engineered Machine competition (iGEM) assembles university-affiliated teams of undergraduate students in the fields of science, technology, engineering, and mathematics to design and build biological systems that operate in living cells. The event began as a month-long course at MIT in 2003, and the following summer transitioned into a competition between teams from 5 universities. Since then, iGEM has grown into an international program with 191 teams from around the world registering in 2012. In addition, the competition has been expanded to include high-school and entrepreneurial categories.

IDT sponsored more than 70 of the 2012 teams (and over 250 iGEM teams in 2016) by providing credit towards obtaining IDT products, including oligonucleotide primers, synthetic genes, and gBlocks™ Gene Fragments, for use in team research projects. To take advantage of current sponsorship opportunities, go to www.idtdna.com/iGEM.

iGEM encourages participants to research biological systems using an engineering approach, and is devoted to education and collaboration in the field of synthetic biology. The competition begins with the teams receiving a set of biological parts, called BioBricks, composed of individual genetic elements such as promoters, genes, and plasmid backbones, from the Registry of Standard Biological Parts (http://partsregistry.org). The teams use these BioBricks, and any new parts they design, in different combinations to build biological devices and systems that solve real-world problems.

Projects run through the summer and are followed in the fall by a series of competitions that culminate in the World Championship Jamboree. Following is a description of an iGEM project from one of the 4 top finalists at the 2012 world jamboree held in Cambridge last November (see the sidebar, Top 2012 iGEM teams, below, for a summary of the 4 top finalists' projects).

The iGEM team from Slovenia (http://2012.igem.org/Team:Slovenia) was the runner up at the 2012 World Championship Jamboree with their Switch-it system project for delivering drug inducible therapeutics directly to target tissues via engineered, encapsulated cells (Figure 1). 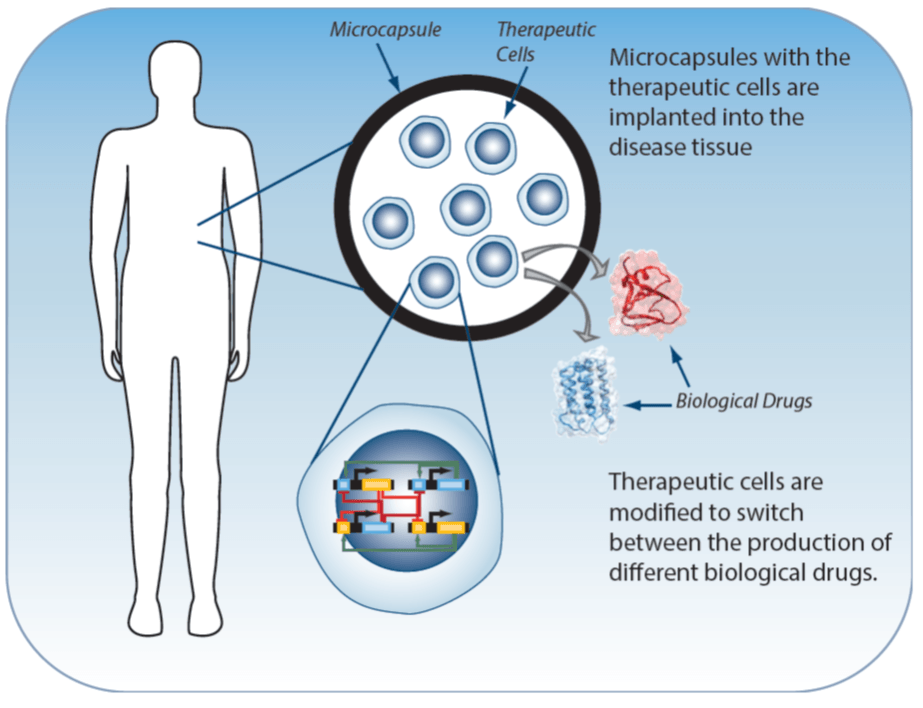 Figure 1. Introduction of alginate encapsulated cells expressing therapeutic proteins regulated by the Switch-it System. Eukaryotic cells are constructed with all of the necessary regulatory and therapeutic components regulated by the Switch-it system. Multiple cells are then encapsulated in an alginate capsule and inserted into target tissues where they can be induced by small drug molecules, such as antibiotics.

We talked with some members of the team about their project and their iGEM experience. The team included 11 student members from the University of Ljubljana, in the capital of Slovenia, and numerous advisors and sponsors, including IDT. We met with student members Uroš Zupančič and Martin Stražar, who presented the team project at the Cambridge Jamboree, along with their fellow teammate Urban Bezeljak. 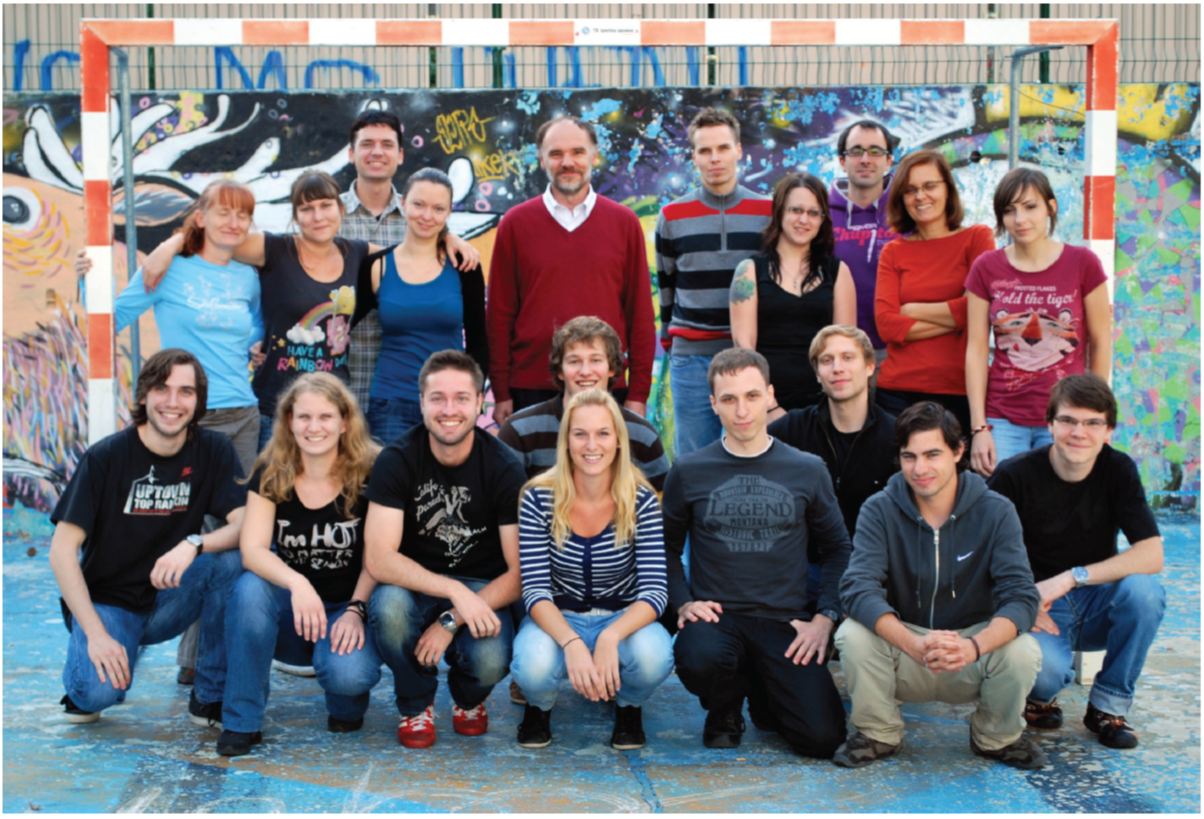 When asked why they chose to participate in iGEM, all three shared a desire to obtain real-world lab experience in this exciting scientific field and to collaborate with faculty and fellow students of diverse academic backgrounds. In addition, the team pointed to one other major factor for their interest in iGEM. Previous Slovenia teams have taken home the iGEM Grand Prize and the BioBrick Trophy (in both 2008 and 2010), which earned them substantial recognition at home.

The student members of the team were chosen from more than 40 individuals who applied. The 2012 team was hoping to continue Slovenia’s tradition of success. Their finish among the top 4 teams should continue to inspire future teams.

How the Switch-it System Works

For their project, the Slovenia team combined TAL effector domains with either repressor or activator elements to regulate the expression of a specific therapeutic effector through induction with a small molecule (or drug), such as an antibiotic (Figure 1).

As an example, the team used this biological switch to create a potential therapeutic system targeting hepatitis C. Cells were directed to produce the antiviral effector interferon-α to help clear the virus, followed by hepatocyte growth factor to promote liver regeneration. The switch serves as a true scientific invention, incorporating positive feedback and mutual repression mechanisms to control leaky expression, and provide robust, stable induction that persists even after the inducer drug has been depleted from the system (Figure 3).

Figure 3. Representation of positive feedback loop switch. The switch is created using TAL regulators fused to either activator or repressor elements. The system is switched from an off position to a stable on position by the addition of a drug (not shown). Activator A upregulates repressor B, effectively shutting off expression of the constructs in the bottom row, including repressor A. With repressor A expression blocked, the constructs in the first row are now unblocked. Repressor B is expressed at higher levels, as is activator A, through a positive feedback loop. Downstream targets of activator A are now positively regulated.

Introducing foreign cells into a tissue also presented the team with a significant challenge, as normally such cells would be targeted by the host immune response and destroyed. To circumvent this response, the students chose to encapsulate the cells in alginate—an anionic polysaccharide distrib­uted widely in the cell walls of brown algae and used in a variety of biopharmaceutical applications—because it does not elicit a reaction from the host immune system, and it does not accumulate in tissues. Alginate encapsulation allows the small drug activators and therapeutic peptides to enter and leave, while protecting the therapeutic cells from immune destruction [1].

Following the desired duration of a therapy, the team needed to ensure that they could completely degrade and clear the encapsulated, engineered cells from the tissue. To accomplish this, they designed the cells to express the bacterial enzyme alginate lyase, which degrades the alginate capsule, allowing the immune system to remove the cells. The team did not have a template for the bacterial wild-type gene, and so, constructed their alginate lyase gene using 3 gBlocks Gene Fragments from IDT. In addition to quick, easy assembly of the gene sequence, use of synthetic gBlocks Gene Fragments allowed the Slovenia team to perform complete codon optimization of the bacterial gene for expression in mammalian cells.

The Slovenian team (Figure 3) was among the finalists at the European Jamboree, where they received the Gold Medal, as well as Best Wiki Award for their Switch-it project. These awards secured them a place in the international iGEM competition, where they finished as runner-up, and received the Award for Best Project in Health and Medicine and Best Wiki and Model.

The team members we spoke with were all nearing the ends of their undergraduate degree programs, and for the most part, were planning to continue their scientific pursuits in synthetic biology or related fields. It was rewarding to know their project had a conceivable biomedical use, and they agreed that the iGEM experience taught them valuable lessons about collaborative science.

IDT sponsored 3 of 4 top finishing teams in the 2012 iGEM competition. Sponsorship was predominantly in the form of credit towards reagents. Below are summaries of these team projects.

1st Place—Groningen: Team Groningen took home the Grand Prize with their food warden system. The food warden is an adhesive label that can be placed inside a meat package. The label is coated with engineered bacteria that express a pigment-coding gene in the presence of volatile compounds generated when meat spoils. The bacteria are kept separate from the meat, first by a capsule that is broken once the label is attached, then by a semipermeable membrane on the label. Such a system could revolutionize food safety and reduce food waste. IDT sponsored Team Groningen.

3rd Place—Paris Bettencourt: The Paris Bettencourt team focused their efforts on identifying, evaluating, and mitigating risk from genetically modified organisms (GMOs). The team built several safety systems, including DNA-degrading kill and inactivation switches, and synthetic-organism containment systems. In addition to the biological work, they proposed a safety assessment tool for GMOs. This IDT sponsored team used gBlocks™ Gene Fragments to generate some of their constructs.

4th Place—LMU Munich: The LMU Munich group developed BioBrick standard materials for use with Bacillus subtilis, a gram-positive bacterium that forms stress-resistant endospores that can germinate in response to certain environmental stimuli. The team’s BacillusBioBrickBox (B4) tools are composed of codon-optimized reporter genes, defined promoters, and empty vectors. To demonstrate the utility of these tools, the students created Sporobeads, which express proteins at the cell surface. The group sees many possible applications of the surface expressed proteins in purification systems, including protein screening.