Use thiol modifications to prepare synthetic oligos for attachment chemistry

Product spotlight: Thiol modifiers are a common type of chemical modification for synthetic oligos. They are designed to react with a broad array of activated accepting groups, such as maleimide and gold microspheres. Use them to prepare synthetic oligos for subsequent attachment chemistry.

Applications of thiol modifiers through history

Incorporation of reactive functional groups at specific sites within an oligo makes it possible to subsequently conjugate the oligo to a variety of ligands and surfaces. Thiol modifiers, a common type of chemical modification for synthetic oligos, are designed to react with a broad array of activated accepting groups, such as maleimide and gold microspheres [1].

While many chemical moieties are available as phosphoramidites, which can be directly used as building blocks for synthetic oligos, others are not. The latter often exhibit characteristics that make them useful as probes for target detection. For example, the infrared dye IRDye® 750 (Li-Cor), widely used in microscopy, is available in either NHS ester or maleimide form. This fluorophore often requires conjugation to thiol-modified oligos via maleimide, especially when the same oligo contains a second NHS ester modification.

Horseradish peroxidase (HRP) further demonstrates use of thiol modifiers in oligo functionalization. HRP is an enzyme that actively catalyzes an oxidation reaction, converting non-colorimetric substrates to colorimetric forms [2] and has been used in a number of target detection applications, such as in situ hybridization and immunoassays. At IDT, this modification is conjugated via a maleimide attachment to thiolated oligos [3].

In the past decade, scientists have focused on the miniaturization of rapid, highly sensitive biological sensors. Electrochemical biosensors often employ gold surfaces as the solid support and synthetic oligos as the recognition element [4]. Aptamers designed to interact with molecules of interest, in conjunction with gold nanoparticles, have shown promise in efficiently and specifically detecting targets in biological samples. Owing to the strong affinity of thiol groups for gold surfaces, thiolated oligos are extensively used for the preparation of functionalized gold nanoparticles. Thiol-modified DNA is also used to label solid surfaces other than gold. With the help of cross-linkers that react with 2 chemically distinct functional groups, researchers have shown the use of thiolated oligos in labeling self-assembled monolayer silane films on silica substrates [5].

Thiol modifiers can be placed at one of several locations on an oligo. In general, the reactive -SH group can be incorporated at the 3′ end, where chemical oligo synthesis begins, via a thiol-modified CPG (controlled pore glass), the solid support used for the start of oligo synthesis. The reactive -SH group can be placed at the 5′ end of the oligo during the very last step of oligo synthesis, using a thiol phosphoroamidite as the final incorporated base. Internal thiol modification can be added onto the oligo backbone via phosphoroamidite chemistry, just like regular bases.

The following thiol modifiers are available through IDT and are added to oligos during synthesis as outlined above.

The 3′ thiol modifier C3 S-S (Figure 2) is used to introduce a thiol group at the 3′ terminus of a synthetic oligo. The thiol group is separated from the oligo by a 3-carbon spacer arm. 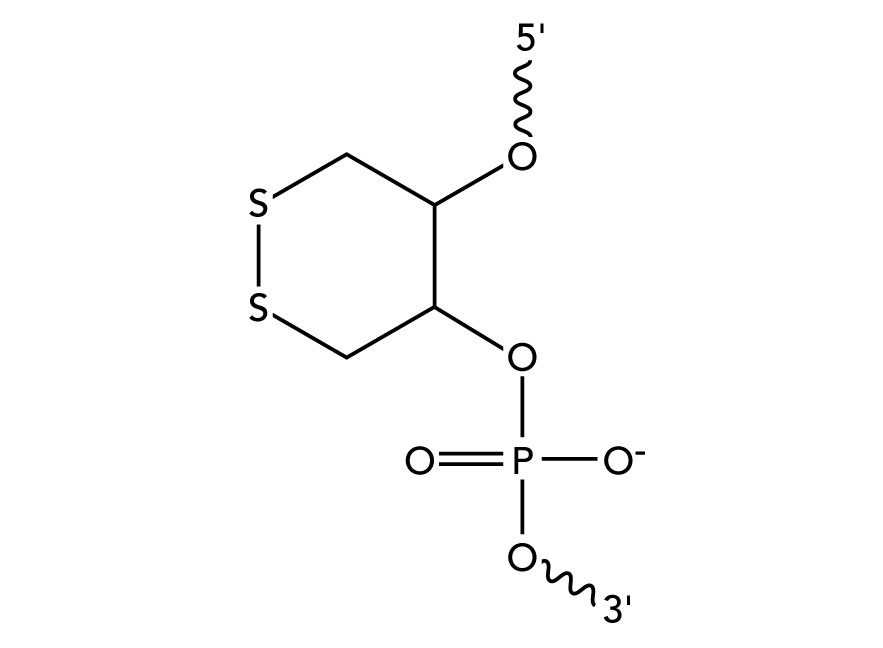 Compared to the 3′ thiol modifier C3 S-S mentioned above, this modification contains a slightly different spacer arm between the oligo backbone and the -SH reactive group (Figure 4). In addition, this modification is offered as an “off-catalog” modification and is not regularly kept in stock. Thus, turnaround time for such modified oligos may be increased by 1–3 business days.

Similar to the catalog dithiol modification mentioned above, dithiol serinol also enables the tagging of 2 reactive thiol residues. As shown in Figure 5, its unique linker architecture increases the spatial distance between the bulky dithiol and the phosphate backbone, which potentially reduces the steric hindrance effect between the oligo and the attached surface. The longer spacer arm also makes it easier to incorporate multiple dithiol modifiers consecutively, without the need for spacers between each addition.

Dithiol serinol is available at any position on an oligo. Currently it is offered as a “non-catalog” modification by IDT. To order this modification, please email noncat@idtdna.com with your account information, and include requested scales and sequence designs. 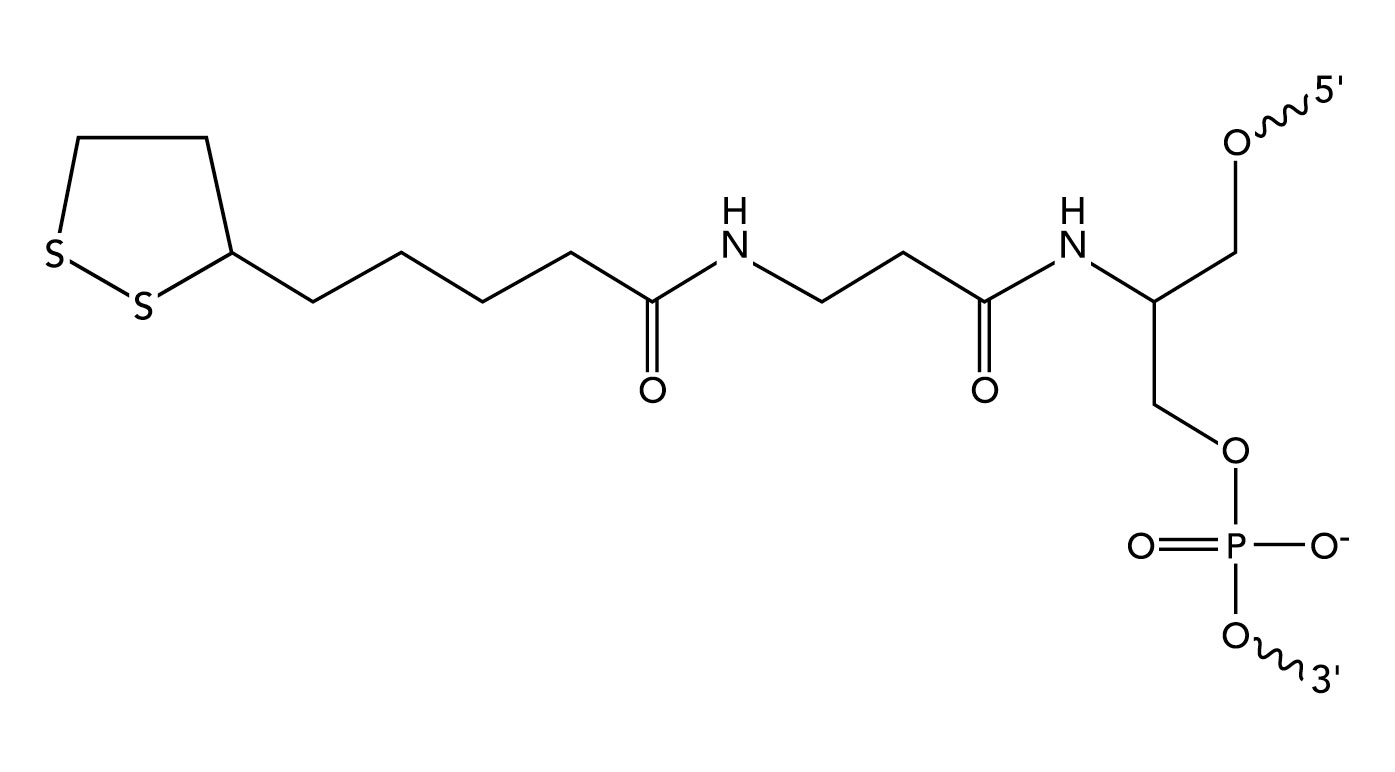 Thiol modifications contain a disulfide bond, the reduction of which leaves a reactive sulfur group. To ensure full reactivity, thiol-modified oligos generally require chemical reduction immediately before use. However, it is possible for the protecting group to spontaneously break from the modification during various steps of the oligo manufacturing process [7]. As a result, 3 different species may be present in preparations of oligos thiolated at their 5′ or 3′ ends: 1) full-length product, 2) product without the protecting group, and 3) dimerized product (Figure 6). 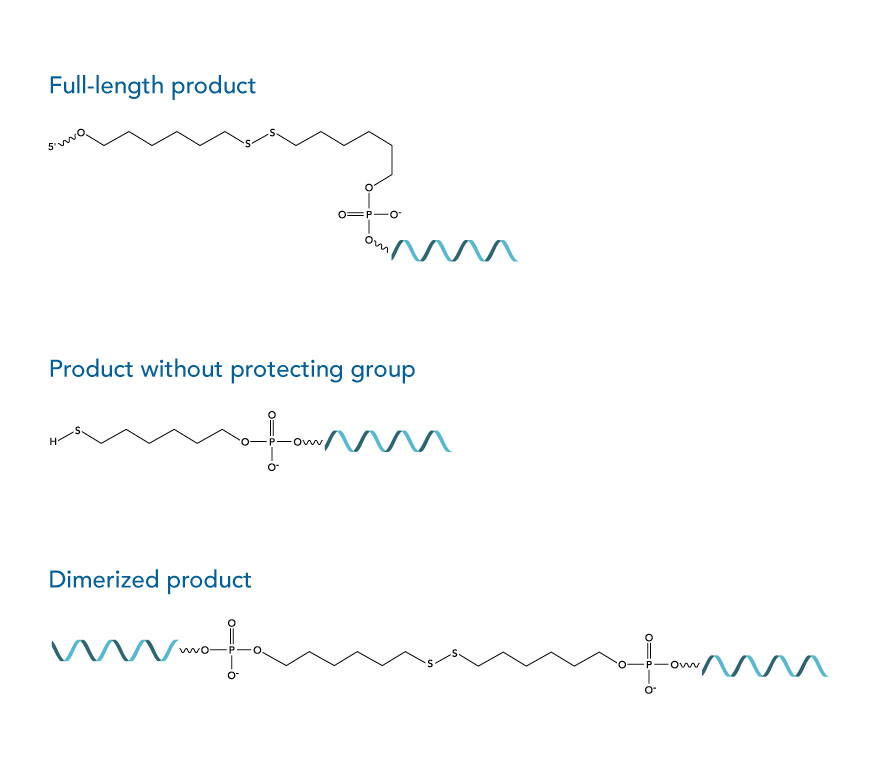 As a global leader in custom oligo synthesis, IDT pioneered the use of mass spectrometry (MS) analysis for quality control in oligo synthesis [8]. With thiol-modified oligos, 2 additional peaks can be seen on electrospray ionization (ESI) MS traces. These represent the 2 species other than full-length product. Figure 7 shows an MS trace where the full-length product exhibits a major peak consistent with the expected mass, while the product without its protecting group shows a lower molecular weight (MW) peak. Depending on where the thiol modifier is located on the oligo, loss of the protecting group will reduce its MW by 131 Daltons (5′ thiol) or 90 Daltons (3′ thiol) compared to the full-length product. On the other hand, dimerized product is usually represented by a minor peak of higher MW. For instance, for 5′ thiol C6 S-S, the expected mass of the dimer is (MW – 131) x 2 Daltons. 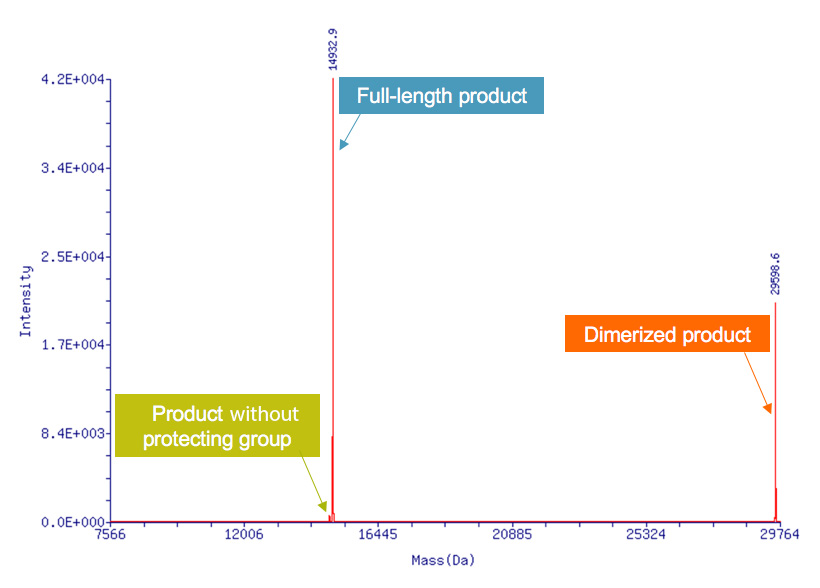 Figure 7. Mass spectrometry trace showing the presence of 3 species of an oligo modified with 5′ thiol modifier C6 S-S. The measured molecular weight of the major peak is 14,932.9 Da, while the calculated mass of this full-length thiolated oligo product is 14,931.9 Da. The larger, minor peak has a measured mass of 29,598.6 Da, which is approximately equal to (14,931.9 – 131) x 2 = 29,601.8 Da. This peak should represent thiolated oligos that have undergone auto-reduction and dimerization. The very minor shoulder on the left side of the full-length product peak represents full-length product that has lost its protecting group and should have a mass of 14,931.9 – 131 = 14,800.9 Da.

Thiol reduction can occur spontaneously, and we are unable to control the rate at which the reduced/dimerized products are generated. While the distinct products can be separated by HPLC, steps after purification can lead to reformation of the multiple thiol species. Therefore, we ship thiol modified oligos with a percentage of all 3 species, with the expectation that the end user will perform a chemical reduction step prior to oligo use. By following a commonly used reduction protocol, you can recreate the fully active oligo from all 3 possible species [9].

Reduction and storage of thiol-modified oligos

We provide a protocol on our website with step-wise guidance for the reduction of thiol-modified oligos. Generally, either Dithiothreitol (DTT) or Tris (2-carboxyethyl) phosphine (TCEP) is used as the reducing agent. Access this protocol here [9].

Any thiol-modified oligo that is not used immediately should be stored frozen. Thiol modified oligos will oxidize again over time, thus the reduction procedure will need to be repeated before coupling.

Contact us at applicationsupport@idtdna.com with any questions about ordering thiolated oligos or to discuss your experimental design with our scientific applications experts.