Our Scientific Applications Support team has assembled a list of frequently asked questions to help you find answers quickly. Filter using one or more categories to focus on specific topics, or use the search bar to perform a text search.

What is the difference between universal and standard blocking oligos (used in NGS experiments)?

Complimentary sequences within adapter sequences cause a daisy chaining effect during hybrid capture pull-down which results in off-target capture.

Generally speaking, blocking oligos will bind to these adapter sequences:

However, the challenge that many researchers face is when multiplexing many libraries. There are typically two options - do singleplex capture, normalize and pool, then capture. The second option, which most researchers prefer, is to normalize and pool samples, and then perform hybrid capture. For both options, each unique barcoded library requires its own unique blocking oligo.

So if you were to perform capture on 96 libraries, you will need 96 blocking oligos in addition to the 96 adapters. In the past, some researchers would use inosine or degenerate bases in the index region in order to create a blocking oligo that will block all indexed adapters. Unfortunately, because these products are not perfect matches, there is typically a % on-target hit of 15-20% (so if on-target was previously 50% with base-specific blocking, the on-target rate would drop to 40% with non-specific indexed blocking oligos).

xGen Universal Blocking Oligos essentially overcomes the performance degradation that is observed with other universal variants, and actually provides an on-target boost when conducting multiplexed capture when compared to standard, base-specific blocking oligos. We have stocked a 6nt and 8nt index.

The following is a 6-plex experiment on a MiSeq with our recently launched AML panel and our 4-hour hybridization protocol: 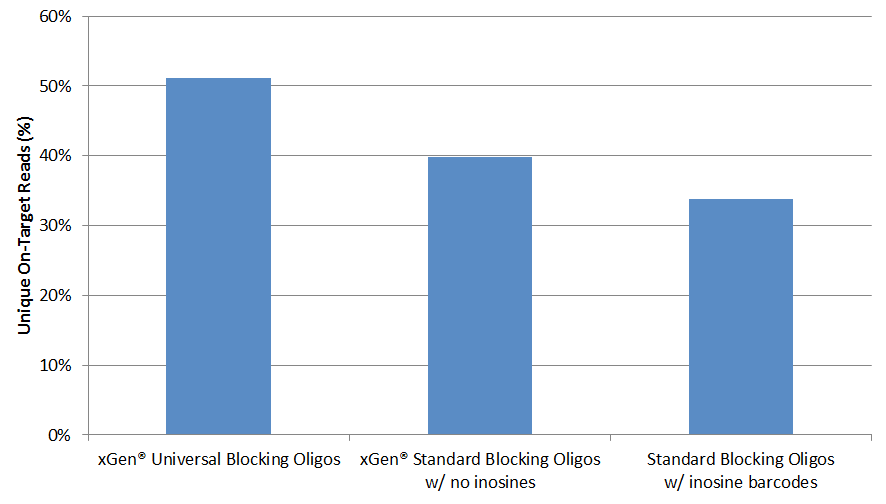 And this is the %-on target normalized against standard blocking oligo performance: