Genotyping is the process of determining the DNA sequence, called a genotype, at specific positions within the genome of an individual. Sequence variations can be used as markers in linkage and association studies to determine genes relevant to specific traits or disease. 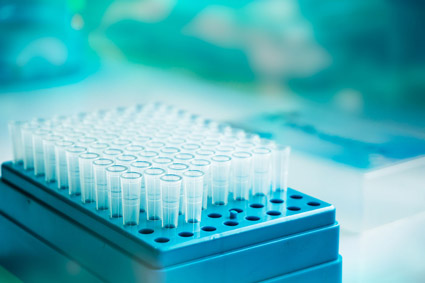 Variation is the term used to describe the characteristic that is different within a populations of distinct individuals within a single species.  For example, some populations of soybean plants will have resistance to a common fungal pathogen such as phytophthora root rot; whereas, other populations will be susceptible to this pathogen. In simplistic terms, fungal resistance is a variation. The phytophthora root rot resistant population has some sort of change enabling the plants to defend themselves against the fungus. If the fungal resistance is passed onto subsequent generations of plants, the change is most likely in the genome.

Environmental and genetic differences are at the root of these visible or phenotypic changes. Since environmental changes are not heritable, most researchers are interested in studying the genetic variation that results in the physical differences. Genetic variation can be passed to the next generation, and can increase the fitness for species.

Genotyping is the experimental procedure that identifies the differences in DNA sequence among individuals or populations. The genotype is used to understand the connection between genotypes and phenotypes. An individual genome is identified as a distinct variant when compared to a reference sequence, which is derived from the general population or a defined subgroup. A variant sequence can differ from the reference sequence in numerous ways. Types of genetic variation include single nucleotide variants (SNV), single nucleotide polymorphisms (SNPs), insertions and deletions (indels), and copy number variation (CNV).

SNPs are the most common type of sequence variant investigated by researchers; they are typically defined as SNVs that occur at >1% in the population. Based on the number of SNPs cataloged in Build 151 (Oct 6, 2017) of the SNP database, dbSNP, maintained by the National Center for Biotechnology Information (NCBI) (RefSNP count 660,773,127) [1] and a haploid genome size of 3.1 x 109 bp [2], the human genome should contain a SNP approximately once every 9.5 bases! Other common model organisms show a similarly high frequency of SNPs [3].

What is a haplotype?

A haplotype is a series of adjacent SNPs from an individual represent a haplotype and can serve as a signature for a specific phenotypic trait (Figure 1). The haplotype group, or block, is inherited together from a single parent since they are close together in the chromosome, which also means that haplotypes can be used to trace lineage. Haplotypes are often used to trace valuable traits for crop production, such as yield or disease resistance. Signature haplotypes may also indicate a predisposition to a specific disease or drug sensitivities, which are key for developing personalized medical diagnoses or treatments.

Figure 1. Haplotypes are groups of SNPs that are inherited as a single block. An example of SNPs (A or G, G or T, and A or T) found in close proximity in the genome. During reproduction, these three SNPs are inherited as a group. Therefore, an individual can inherit one of three distinct haplotypes (AGT, GTA, AGA) depending on the SNP profile of their parents.

By comparing genetic variations among individuals of a species, researchers can identify heritable genetic signatures, or markers, relevant to specific traits. These unique differences can be used as markers in linkage and association studies.

Genome-wide association studies, or GWAS, compares genetic differences across entire genomes from two individuals or populations. For example, the genomes of a group of people that have a disease can be compared to a genomic sequences from a similar group of people without the disease. Any SNP or haplotype that is more prevalent in those with the disease is called an associated genetic marker.

Association is merely the beginning, and many studies are needed to confirm if the genetic variation is truly the underlying genetic change that codes for the variant or trait. The National Center for Biotechnology Information (NCBI) maintains a registry of human genomic variations and their relationship to health called ClinVar. The website archives variation in human genes, and the evidence supporting the association to a particular phenotype. Besides human health, finding the relationship of genotype to phenotype has many applications:

There are varied approaches to SNP genotyping depending on the number of samples, the number of genotypes to be tested, and the amount of sample material available, all factoring into the choice of technology.

Learn more about the language used in genotyping studies.

Quantitative polymerase chain reaction (qPCR) is a commonly used genotyping technique. Often employing a primer-pair and target-specific fluorescent probe, qPCR can be a sensitive and specific way to identify SNPs. IDT offers a complete SNP genotyping solution with predesigned assays, as well as complementary easy- and ready-to-use reagent mixes. For other applications, modified probes are available that can be incorporated into custom qPCR assays.

Digital PCR (dPCR) includes the same reagents found in a typical qPCR assay and amplified in a similar manner, but dPCR divides the reaction into nano-sized droplets or wells prior to amplification. The partitions are so small that either 1 or 0 templates are in each. After amplification, the fluorescence in the well or droplet represents the genotype.

Get started with genotyping

For user-defined methods, order custom probes with modifications, such as Affinity Plus™ qPCR locked nucleic acid probes, that increase probe stability and enable designs within difficult sequences and with selective target identification.

Our amplicon solutions enable you to advance from sample to sequencing faster, without sacrificing coverage or yields. If your research requires rapid, ready-to-sequence materials or you are working with low-input quantities, xGen™ NGS can unlock the answers you seek.

The Affinity Plus bases used in these qPCR probes include up to 6 locked nucleic acid monomers. When incorporated into a probe, locked nucleic acids impart heightened structural stability, leading to increased hybridization melt temperature (Tm).

PACE is a trademark of 3CR Bioscience