Oligonucleotide-based antisense techniques represent one of the most common and successful approaches to suppress a genetic message. ASOs require chemical modifications to be sufficiently active in vivo [2]. The first-generation antisense technique was introduced by Eckstein and colleagues in the late 1960s. This group replaced one of the non-bridging oxygen atoms in the phosphate backbone of an oligo with a sulfur atom [3, 4]. While this “phosphorothioate modification” improved nuclease resistance in plasma, tissues, and cells, the phosphorothioated oligos displayed a tendency for non-specific binding with certain proteins that resulted in cytotoxicity when delivered at high concentrations [5, 6]. 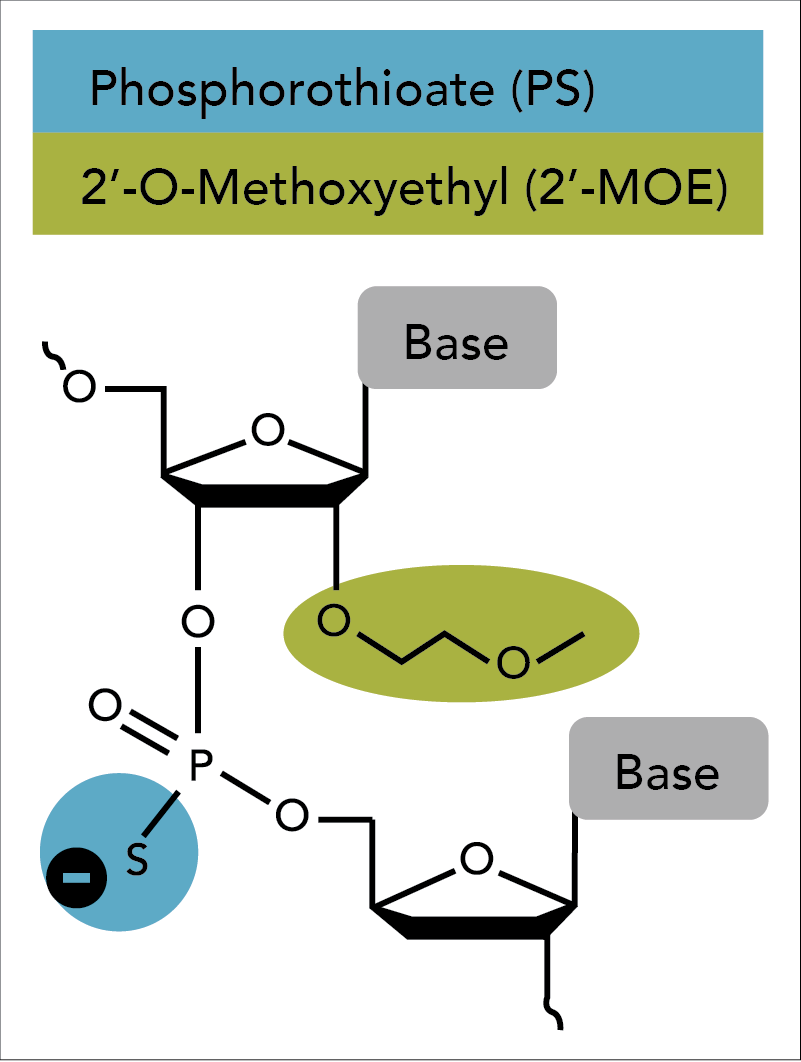 Second generation antisense techniques address cytotoxic issues by introducing modifications at the 2′ position of the sugar moiety. Among these modifications, 2′-O-methoxyethyl (2′-MOE) has emerged as one of the most advanced analogs, and provides the greatest value for enhancing the drug-like properties of oligonucleotides (Figure 1) [7–11]. ASOs containing 2′-MOE modifications display enhanced nuclease resistance in concert with lower cell toxicity and increased binding affinity to the desired target. Oligos containing 2′-MOE, in combination with other chemical modifications, have advanced a number of antisense drugs to clinical testing, which transitions antisense technologies from the test tube to actual disease treatment [12].

Use of 2′-MOE on RNase H-dependent ASOs

2′-MOE modifications are used broadly to support a variety of antisense mechanisms. One of the most common of these is RNase H cleavage. ASOs fully composed of sugar-modified RNA-like nucleotides (such as 2′-MOE), however, do not support RNase H cleavage of the complementary RNA. This limitation has been circumvented by constructing a hybrid oligonucleotide in the form of a “gapmer” (Figure 2). A standard gapmer retains a central region of PS-modified DNA bases sufficient to induce RNase H cleavage. These bases are flanked on both sides by blocks of 2′ modifications that will increase binding affinity to the target. Once delivered to cells, ASOs enter the nucleus and bind to their complementary, endogenous RNA target. Hybridization of the ASO gapmers to target RNA forms a DNA:RNA heteroduplex in the central region, which becomes a substrate for cleavage by the enzyme RNase H1 [13].

While the use of such chimeric oligos enables RNase H-mediated degradation, it also provides a solution to another antisense issue. Non-specific cleavage can occur when portions of ASO sequences bind promiscuously within an RNA population. However, the shorter, targeted central sequences of gapmers, bounded by the uncleavable RNA analogs, to a large extent, mitigate this problem.

Compared to 2′-O-methyl (2′OMe)—another commercially available 2′ substitution, 2′-MOE gapmers provide more consistent knock down of endogenous gene expression. As shown in Figure 3, the potency of 2′OMe and 2′-MOE modified ASO gapmers was assessed and compared at the same 7 target sites in the human gene CTNNB1. As expected, 2′-MOE ASOs were consistently more effective at suppressing RNA levels than were the same sequences modified by 2′OMe. 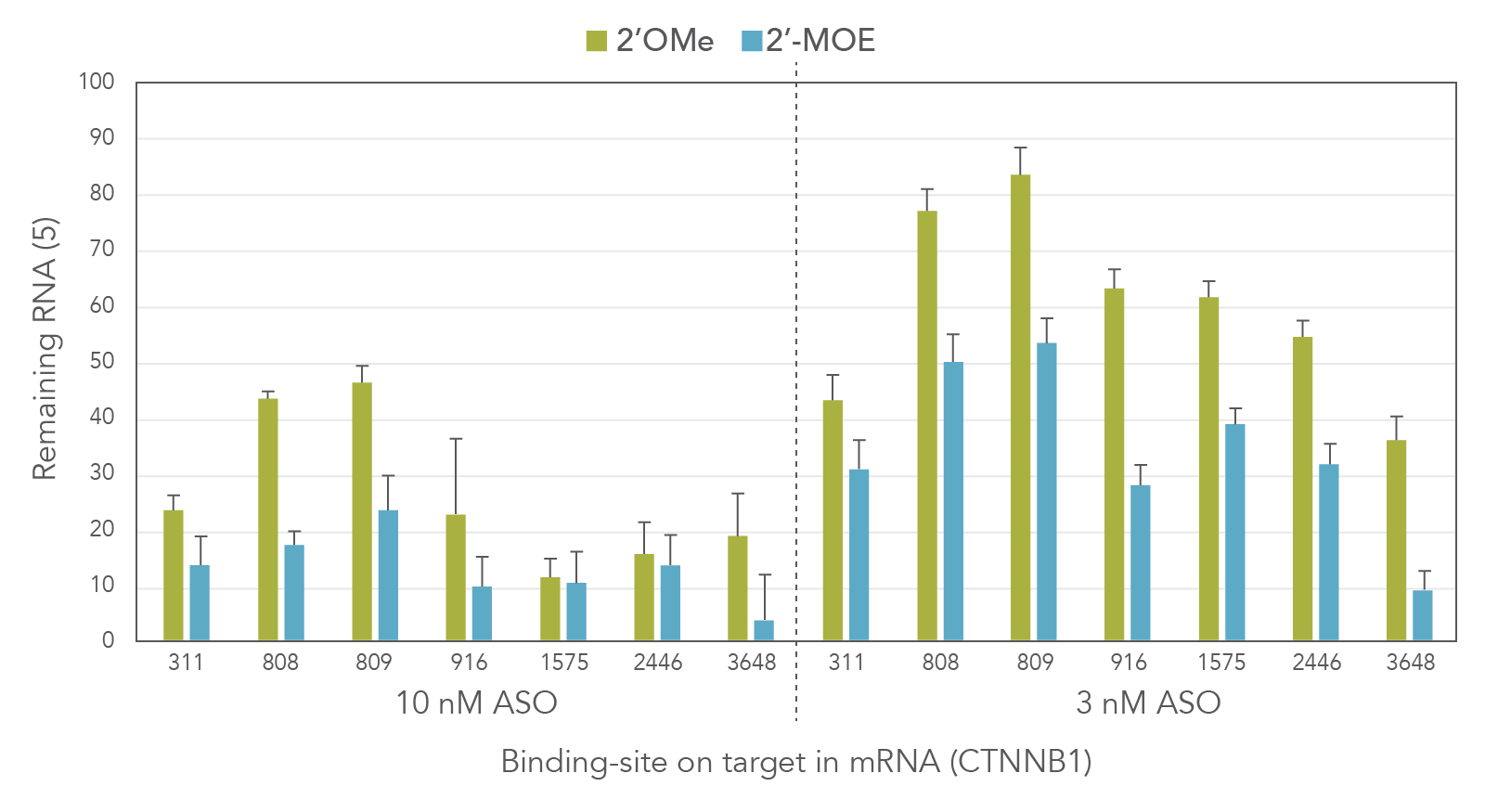 Figure 3. Expression level of CTNNB1 gene efficiently downregulated by chemically modified ASOs. ASO gapmers modified with 2′-MOE (blue) or 2′OMe (green) were transfected in triplicate into HeLa cells with Lipofectamine 2000 (Thermo Fisher). After 24 hr, mRNA levels were measured by RT-qPCR. Levels of individual mRNAs were calculated using internal reference genes HPRT and SFRS9. These were then compared with HeLa cells transfected with negative control sequences containing the same chemical modifications at the same doses. Site locations in the target are indicated on the x-axis and are organized from 5′ to 3′ along the target gene CTNNB1.

Modulating alternative splicing is a major clinical application of steric blocking ASOs. By blocking the protein-RNA binding interactions between splicing machinery components and the pre-mRNA, steric blocking ASOs can be used to manipulate the splicing repertoire of a specific transcript. This is particularly valuable for treating diseases caused by mutations that lead to abnormal splicing or in cases when interfering with normal splicing processes can be therapeutic. For example, Nusinersen (marketed as Spinraza by Biogen), is a fully 2′-MOE modified 18-mer ASO that modulates alternative splicing of the SMN2 gene and functionally converts it into SMN1. In 2016, Nusinersen/Spinraza received FDA approval for treatment of spinal muscular atrophy, a devastating rare neuromuscular disorder that often leads to early death [14, 15].

The potential for ASOs as therapeutic agents is just beginning to be realized. ASOs also provide a valuable tool for studying the biological function of genomic elements or discerning genetic contributions to disease. During the past 30 years, IDT has been providing nucleic acid products and other innovative tools to drive research advances that inspire scientists worldwide to achieve milestones in antisense science (Figure 4) [13, 16–25]. 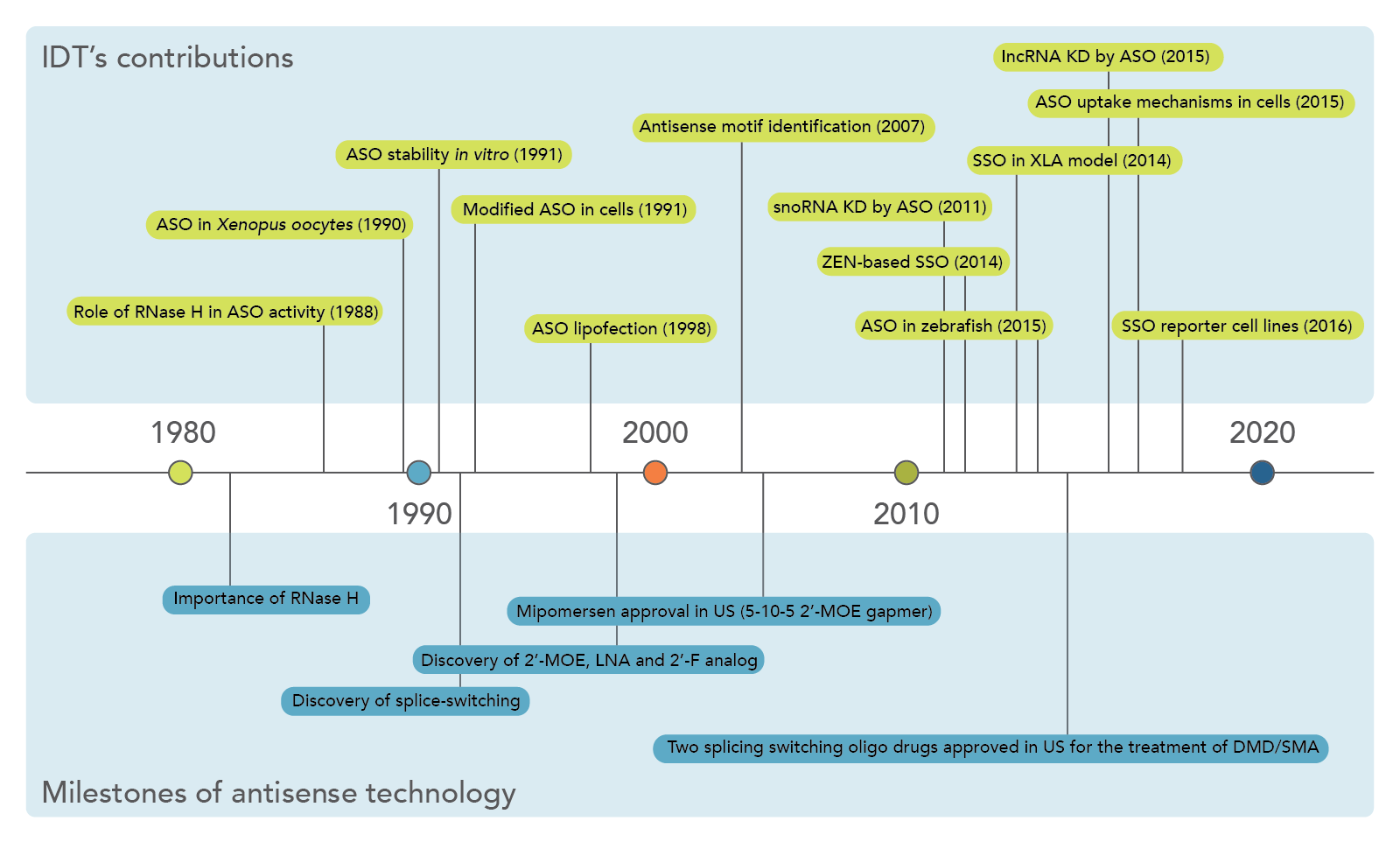 The 2′-MOE modification complements the IDT ASO product portfolio, containing PS and 2′OMe bases. 2′-MOE modified bases are available at a broad range of scales. Order them as custom DNA oligos at: https://www.idtdna.com/site/Catalog/Modifications/Category/7.

Contact us at applicationsupport@idtdna.com with any questions about ordering modified ASOs, or to discuss your experimental design with our scientific applications experts.