Frustrated by the tedious, inefficient limited dilution cloning process? Find out how a single-clone isolation protocol can accelerate phenotypic characterization of your edited clones.

Recent advances in genome engineering technologies based on the CRISPR-Cas9 System enable opportunities for systemic interrogation of gene functions in mammalian cells. CRISPR-Cas9 genome editing tools can be used to introduce a change at a specific genomic location, either to cause a frameshift for loss-of-function studies or to insert an exogenous sequence for gain-of-function studies.

Similar to other nuclease-driven mutagenesis methods that introduce site-specific nucleotide changes, CRISPR-Cas9 editing in tissue culture results in a heterogeneous, polyclonal population in which the editing outcome may differ among individual cells. In some experimental settings, it may be necessary to generate an edited cell line containing a homogeneous genetic background to retain the desired genotype, and to facilitate downstream phenotypic characterization.

Multiple approaches have been developed for isolation of monoclonal cell lines, such as single-cell sorting, isolation with cloning cylinders, and limiting dilution [1–3]. Although these methods are well-established and widely used, they all have limitations. Fluorescence-activated cell sorting (FACS) requires a fluorescent reporter to be co-delivered and expressed, while cloning cylinders are used exclusively for adherent cells.

Limiting dilution requires a highly diluted cell suspension from which single cell-derived clones are isolated and further expanded. Unlike single-cell sorting or using cloning cylinders, which require sophisticated instruments, limiting dilution can be done with standard pipetting tools. However, it is a laborious and time-consuming process with low throughput. Also, this method cannot be applied to cells that do not propagate from single-cell clones. The probability of obtaining a single-cell in an aliquot of statistical value makes this method inherently inefficient. So, while limiting dilution provides the most versatile approach, it will require adjustments to give you the best chance of successful single clone isolation.

IDT scientists assessed three types of limiting-dilution cloning protocols: low-density seeding, serial dilution, and array dilution. Of those, the array dilution method provides the highest success rate combined with ease of use [4].  This method can be used to efficiently isolate a monoclonal cell line from a recently CRISPR-Cas9 engineered cell population, followed by clonal expansion to generate the desired cell line. We provide a detailed, step-informed protocol focused on adherent cells in the Appendix below.

The first limiting-dilution cloning method was performed using a diluted cell density as low as 0.5 cells per aliquot. This requires transferring 100 µL aliquots of a transfected cell suspension (5 cells/mL in complete growth medium) into each well of a 96-well plate. According to a Poisson distribution, seeding at an average of 0.5 cells/well ensures that at least some wells receive a single-cell, while minimizing the likelihood that any well receives more than 1 cell. This method was widely adopted for clonal isolation of hybridomas, but its efficiency in our hands was unexpectedly low, possibly due to relatively low cell viability after transfection.

The second method we tested started with a much higher cell density. As shown in Figure 1, the wells in Column 1 received 100 µL of cell suspension at a density of 1000 cells/mL. Subsequently, 2-fold serial dilutions were made horizontally across the plate. Serial dilution avoids the need to pipette very small volumes so is commonly used to prepare diluted analytes. The wells receiving the initial inoculum can be used to help focus the microscope when scanning the plate for individual cells that are sometimes difficult to find. Single clones are expected in Column 11 and adjacent columns. Compared to the low-density seeding method, in which the single clones are randomly distributed across the plate, this method saves the scanning labor by limiting the possible wells of interest to 3–4 columns instead of the entire 96-well plate. We also observed a discernible improvement in efficiency with this serial dilution method compared to low-density seeding. 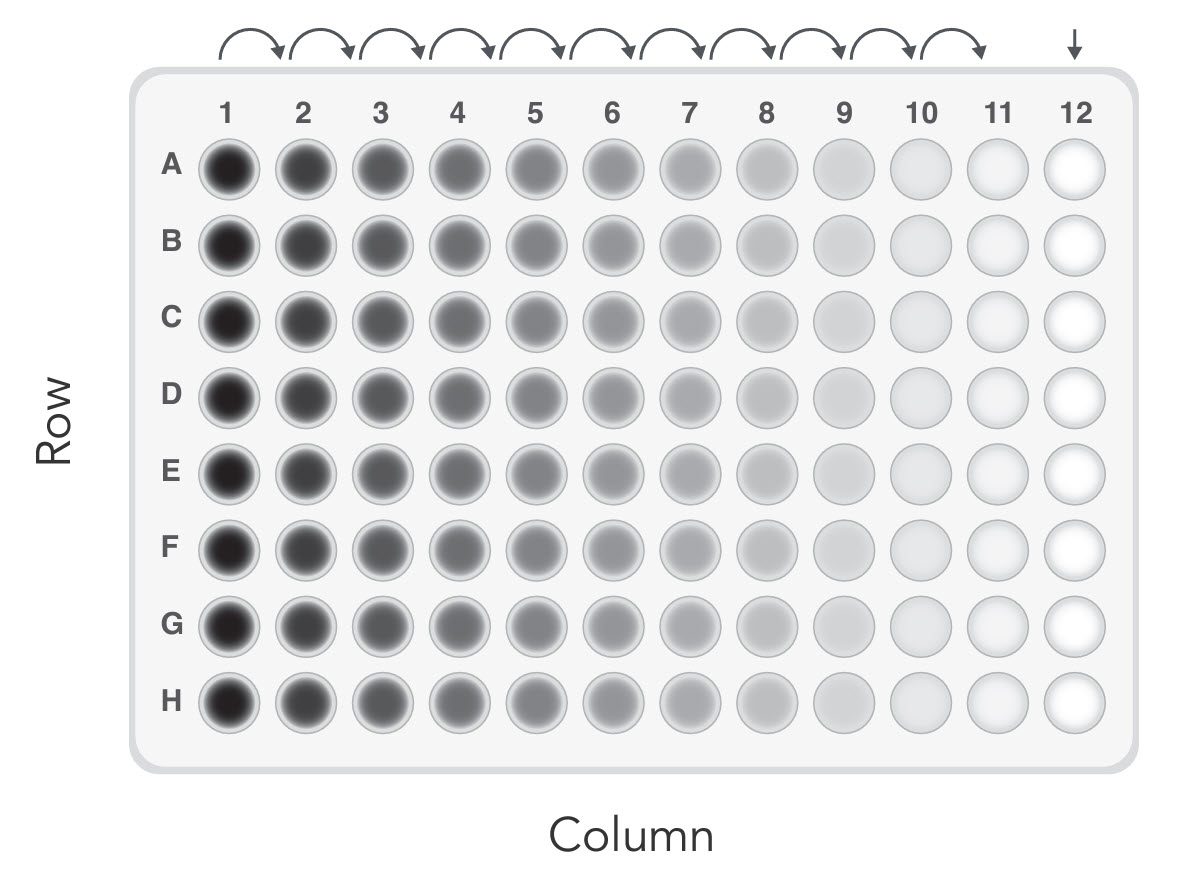 The last method, array dilution, provided us with the highest success rate [4]. The initial inoculation occurs in one well instead of an entire column (see Figure 2). This allows for a subsequent 2-fold serial dilution—first vertically, then horizontally. In our hands, we retrieved more than 30 single clones out of 3 x 96-well plates. As expected, most of the single clones were found along the diagonal. 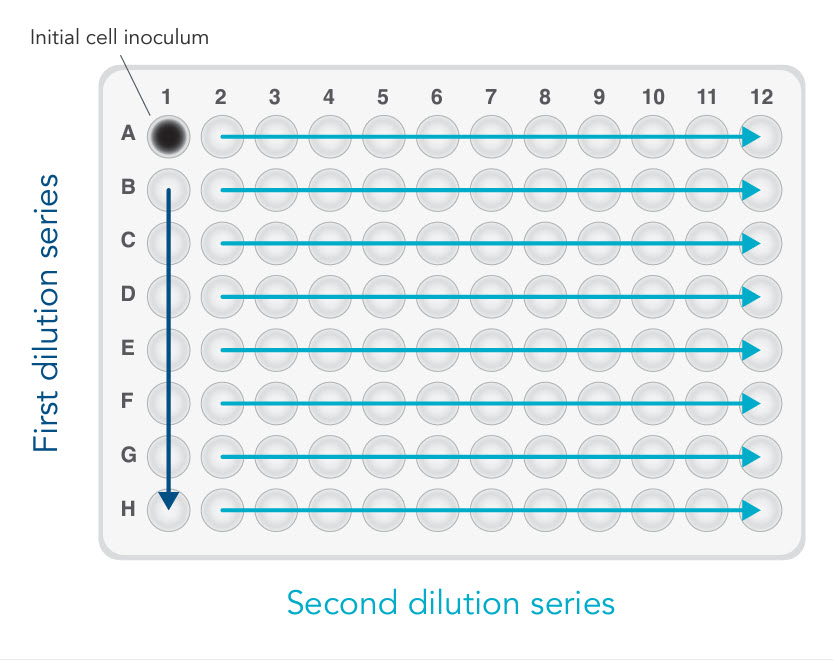 See the detailed, step-informed array dilution protocol focused on adherent cells in the Appendix below.

Important considerations before you start:

Note: HEK-293 cells are cultured in DMEM medium containing 10% fetal bovine serum (FBS). Cells are maintained at 37°C in a CO2 incubator at 37°C and passaged every 3 days. Ideally, cells should be at 70–80% confluency at the time of transfection.

A. (Recommended) Perform the transfection in a 6-well plate to ensure sufficient cells are available for subsequent experiments.

A. Aspirate the medium and wash cells twice with pre-warmed PBS.

E. Determine the total number of cells required for your experiment. Further dilute cells in complete growth medium to 2 x 104 cells/mL or the concentration suited to your cells.

Tip: We recommend 2 x 104 cells/mL as a good starting point. Further titration may be required for other cell types.

C. Transfer 100 µL of cell suspension from well A1 to B1. Mix by gently pipetting. Repeat the 1:2 dilutions down Column 1 using the same pipet tip (Figure 2, first dilution series).

D. Add 100 µL of complete culture medium to wells A–G in Column 1 to reach a final volume of 200 µL/well. Mix by gently pipetting.

E. Use the same tips to transfer 100 µL of cell suspension across the plate horizontally from Column 1 to Column 2. Mix by gently pipetting. Repeat the 1:2 dilution across the rows using the same pipet tips (Figure 2, second dilution series).

Tip: Subculture a portion of the cells derived from the single clone into a larger vessel (e.g., 24- or 48-well plate). Transfer the rest of the cells into a new 96-well plate for screening purposes. Depending on the nature of the desired nucleotide change, various methods such as Sanger sequencing, next generation sequencing, or genotyping via qPCR can be used for confirmation of the desired genome editing events.


For research use only. Not for use in diagnostic procedures. Unless otherwise agreed to in writing, IDT does not intend these products to be used in clinical applications and does not warrant their fitness or suitability for any clinical diagnostic use.  Purchaser is solely responsible for all decisions regarding the use of these products and any associated regulatory or legal obligations. RUO22-1498_001