Knocking out a gene means to mutate the DNA in a way that stops the gene’s expression permanently. This is possible in all kinds of cells and organisms, using specific genetic approaches. Currently, the fastest and most direct approach to achieving specific gene knockout is to use CRISPR genome editing. 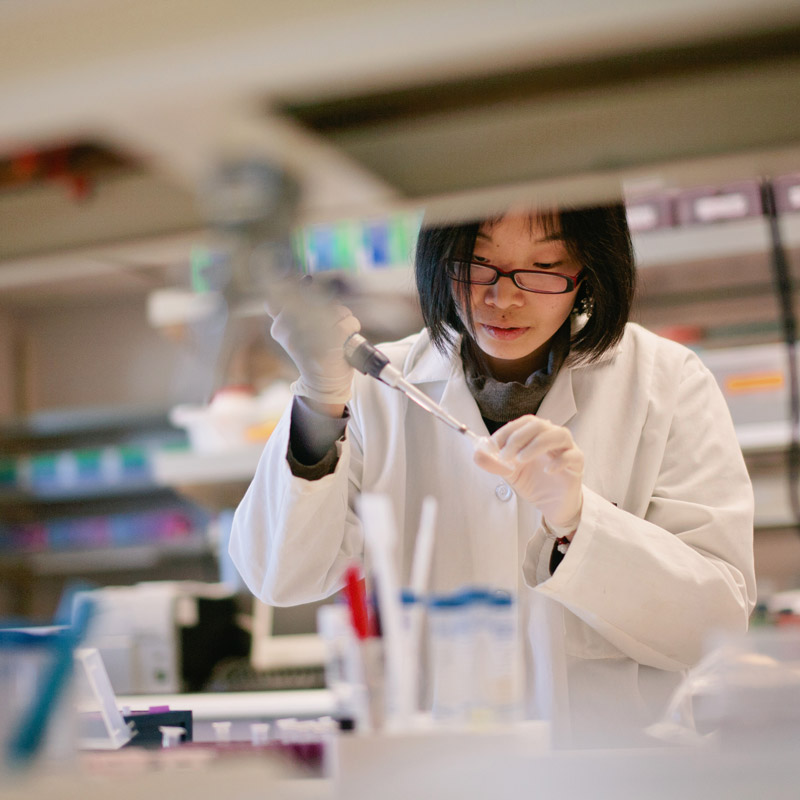 What is gene knockout?

Gene knockout (KO) is a technique by which the genomic DNA of a cell or a model organism is perturbed, so that the expression of a specific gene is permanently prevented. Gene knockout methods, unlike knockdown methods, damage specific genes, making them non-functional. If the cells or model organisms survive a knockout event, they can never return to expressing the functional gene product.

Gene knockout does not mean that an entire gene must be physically excised or cut out from the genome. Instead, when a gene is knocked out, a frameshift mutation leading to a stop codon is usually introduced near the 5′ end of the gene (near the start site of transcription). All transcription downstream of the stop codon is permanently prevented, so the gene is knocked out.

Gene knockout vs. knockdown and knock-in

Gene knockout is not merely decreasing or temporarily inhibiting either transcription or translation of a gene. Such approaches are instead known as gene knockdown.  Knocking in a gene or any stretch of DNA requires introducing a new DNA strand as a "donor" for homology-directed repair (HDR) in addition to introducing CRISPR Cas enzyme and guide RNA.

Gene knockout in mice and other organisms

Scientists have been able to knock out genes in bacteria and yeasts for many years. This has usually involved exposure of such cells to radiation or mutagenic chemicals. The development of KO mammals (specifically, mice) was a significant advance, for which the Nobel Prize was awarded in 2007 to Mario Capecchi, Martin Evans, and Oliver Smithies. However, such KO mammals were difficult and expensive to produce, involving extensively complex, time-consuming work with mouse embryonic stem cells.

Since the development of CRISPR genome editing, KO animals and other organisms have become relatively quick, easy, and inexpensive to produce with high levels of precision. CRISPR-mediated KO mice were first reported in 2013 [1], almost immediately after the first report of CRISPR genome editing in mammalian cells [2]. One of the greatest advantages of CRISPR for producing KO animals is the speed by which they can be obtained.

A CRISPR-associated (Cas) enzyme is used to cleave target DNA, resulting in a double-strand break (DSB). The Cas enzyme is directed by the guide RNA (gRNA) to a user-defined site in the genome, and then the Cas enzyme cuts the DNA. When the Cas protein is provided with a well-designed gRNA, the nuclease can be programmed to cut at virtually any location in any organism’s genome.

Cells try to repair DSBs to avoid cell death which would otherwise result from loss of genomic stability. However, repair of the DSB doesn’t necessarily mean perfect repair. If perfect repair took place every time, gene knockout by CRISPR genome editing would not work. Instead, insertions and deletions (indels), which introduce stop codons and gene knockouts, often occur when DSBs are repaired.

Non-homologous end-joining (NHEJ) is the best known and probably the most common repair mechanism that can make changes (mutations) in the DNA [3]. The NHEJ pathway joins DSB ends without the need for a homologous template. During the processes of ligating the cut ends of the DNA, NHEJ can often introduce small insertions or deletions (indels) at the break point. Frequently, an indel causes a frameshift mutation leading to a stop codon, which disrupts a gene’s expression and function—very useful to knock out a target gene.

Gene knockout remains a vital approach for understanding biology. By disrupting a specific gene, scientists can discover the effects and functions of that gene. This is useful in studying signaling pathways in all types of cells and is usually necessary for large-data approaches to biology, such as CRISPR screening.