Tips for designing spike-in controls for next generation sequencing analysis

Every experiment needs controls to guarantee results. How well your next generation sequencing experiment works can be tracked using synthetic DNA fragments. Read about the applications of gBlocks Gene Fragments as sequencing controls.

Next generation sequencing (NGS) has found wide applicability, including determining and characterizing unknown sequences, detecting changes and variability in known sequences, and quantifying gene expression. One of the greatest advantages of NGS is the ability to sequence and analyze large numbers of samples simultaneously.

During library preparation, the DNA extracted from each sample is first fragmented, either mechanically or enzymatically, and then ligated with known index sequences. Several sample libraries, each tagged with unique index sequences, can then be pooled or multiplexed for sequencing [1].

Yet, sample processing on a high-throughput scale presents cross-contamination and sample swapping risks that result in data analysis errors and misassigned reads [2,3]. The use of plasmids and synthetic oligonucleotide fragments is recommended as spike-in controls for NGS applications to identify sample swaps and cross-contamination, as well as measure various assay parameters [2–5].

gBlocks Gene Fragments are linear, double-stranded DNA fragments that can be custom-designed as spike-in controls for NGS. Adding known controls that are subject to the same experimental conditions as the sample can be used to quantify technical bias and track samples (Figure 1). 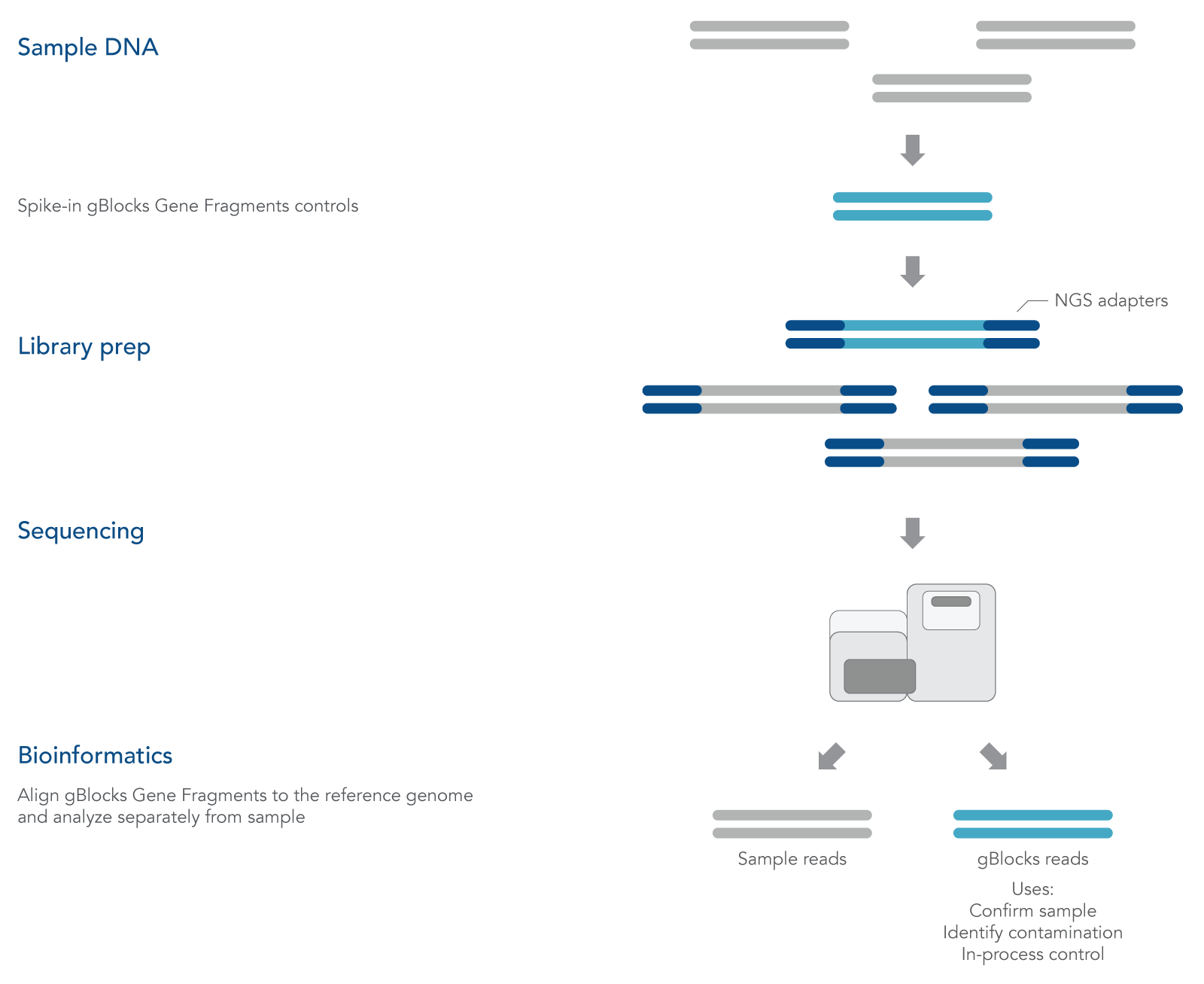 Sample tracking can also be used when detecting single nucleotide polymorphisms (SNPs) by amplicon sequencing techniques, such as the IDT xGen™ Amplicon Technology found in our predesigned amplicon panels or custom panels. With these applications, gBlocks Gene Fragments controls can be designed to encode the region flanking the SNP, while a known barcode or mutant sequence can be incorporated in place of the SNP as a marker. This barcode or mutant sequence differentiates control reads from those derived from experimental reads, making sample tracking more efficient.

For hybridization capture-based targeted sequencing approaches, such as those employing xGen Predesigned Hyb Panels or xGen Custom Hyb Panels, gBlocks Gene Fragments controls can be used to test capture efficiency and detect if there is any bias in the capture. These synthetic controls with the sequence of interest can be spiked into samples before library prep at known concentrations (or copy numbers) and quantified post-capture by qPCR to measure relative capture efficiencies for target vs. control sequences. Controls can also be designed to represent different experimental conditions (e.g., a range of GC content: 20%, 40%, 60%, and 80%) and measure capture efficiencies within the designated range.

Controls used in amplicon sequencing can indicate differences in amplification rates across targets of different lengths and GC content. To determine if there is amplification bias, gBlocks Gene Fragments are added at a known copy number and amplified simultaneously with the target sequence. Controls can also be quantified to normalize inputs across multiple targets before sequencing.

For library preparation that includes PCR amplification, controls are also used to quickly check the rate of amplification errors that may be introduced during this step. Errors or mismatches in gBlocks Gene Fragments control reads of a known sequence can be compared to potential errors introduced in target reads. Here, the control sequence should not be homologous to the target, but it should be representative in length and GC content.

Controls can also help assess adapter ligation efficiencies by qPCR before sequencing. The gBlocks Gene Fragments controls can be designed to be in the same size range as the mean fragment size of the target DNA post-fragmentation. Control fragments can be spiked into the fragmented target DNA sample before the end-repair and A-tailing steps of library prep, for use with TA-ligation adapters such as TruSeq™-Compatible Full-length Adapters.

For research use only. Not for use in diagnostic procedures. Unless otherwise agreed to in writing, IDT does not intend these products to be used in clinical applications and does not warrant their fitness or suitability for any clinical diagnostic use. Purchaser is solely responsible for all decisions regarding the use of these products and any associated regulatory or legal obligations. RUO22-1265_001

TruSeq is a registered trademark of Illumina, Inc., used with permission. All rights reserved.