Product spotlight: Conventional cDNA construction strategies usually result in an underrepresentation of the 5' ends of cDNA. However, use of a template switching chimeric DNA:RNA oligo and MMLV reverse transcriptase can improve on this. See how this approach, dubbed SMART® technology (Takara Bio USA, Inc), makes it possible to efficiently amplify the entire full-length transcript pool, in a completely sequence-independent manner.

Emerging high-throughput technologies such as RNA-seq have enabled functional dissection of complex transcriptomes with a minimal amount of RNA input. Accurate quantification of individual transcripts or identification of unknown transcription start sites requires an efficient approach to convert mRNA molecules into full-length cDNA. However, conventional cDNA construction methods usually result in an underrepresentation of the 5’ ends of cDNA.

This outcome poses a significant technical obstacle for researchers interested in transcriptome analysis in non-model organisms or in gene discovery [1,2].

Described originally in 2001, a strategy frequently referred to as “SMART” (switching mechanism at the 5' end of the RNA transcript) technology (Takara Bio USA, Inc) has shown promise in generating full-length cDNA libraries, even from single-cell–derived RNA samples [1,3]. This strategy relies on the intrinsic properties of Moloney murine leukemia virus (MMLV) reverse transcriptase and the use of a unique template switching oligonucleotide (TS oligo, or TSO).

During first-strand synthesis, upon reaching the 5’ end of the RNA template, the terminal transferase activity of the MMLV reverse transcriptase adds a few additional nucleotides (mostly deoxycytidine) to the 3' end of the newly synthesized cDNA strand.

These bases function as a template switching (TS) oligo-anchoring site. Upon base pairing between the TS oligo and the appended deoxycytidine stretch, the reverse transcriptase “switches” template strands, from cellular RNA to the TS oligo, and continues replication to the 5' end of the TS oligo. By doing so, the resulting cDNA contains the complete 5' end of the transcript, and universal sequences of choice are added to the reverse transcription product. Along with tagging of the cDNA 3' end by oligo dT primers, this approach makes it possible to efficiently amplify the entire full-length transcript pool in a completely sequence-independent manner [4]. See Figure 1 for a schematic of this method. 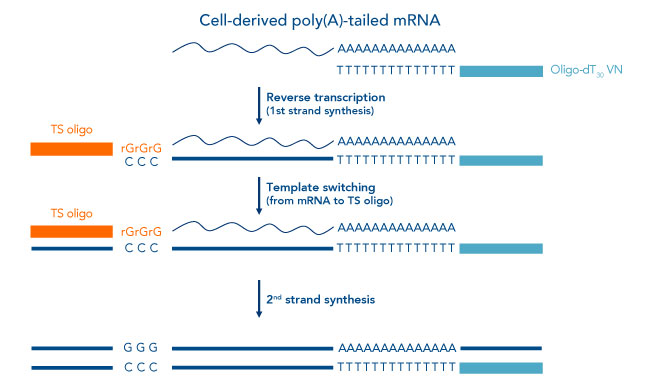 The simple version of a template switching (TS) oligo is a DNA oligo sequence that carries 3 riboguanosines (rGrGrG) at its 3' end [1]. The complementarity between these consecutive rG bases and the 3' dC extension of the cDNA molecule empowers the subsequent template switching [5]. A more recent study suggested replacing the 3' most rG with a locked nucleic acid base, possibly due to the enhanced thermostability of the locked nucleic acid monomer, which would be advantageous for base pairing [6].

Interestingly, a systematic study was conducted in 2013 to compare the multiple modified templateing switching (TS) oligo versions side-by-side, and the data indicated that RNA/DNA hybrids provide a superior level of 5' cap-specific enrichment, even though the DNA/locked nucleic acid duplexes were expected to be more thermodynamically favored [7].

Driven by the growing interest in single-cell transcriptomics, alternative modification patterns have been explored to further improve template switching (TS) oligo performance. For instance, in 2010 researchers reported an approach to reduce library background and thereby improve cDNA yield by incorporating isomeric nucleotides into the TS oligo [8]. In this study, 2 modified bases, iso-dC and iso-dG, were appended to the 5’ end of the TS oligo. These 2 modifications, which are chemical variants of cytosine and guanine, respectively, form hydrogen bonds with each other but not with naturally occurring C and G nucleotides. As anticipated, this modified version demonstrated efficacy in minimizing the concatenation of TS oligos, which typically results from cycles of reverse transcriptase activity [8,9].

Contact us at applicationsupport@idtdna.com with any questions about ordering modified oligos or to discuss your experimental design with our scientific applications experts.