When dT is required for modification attachment

Product spotlight: Certain modifications require a dT base in the oligonucleotide sequence in order to be added. Learn which modifications these are, and how to add them to your oligo sequence.

Product spotlight: Certain modifications require a dT base in the oligonucleotide sequence in order to be added. Learn which modifications these are, and how to add them to your oligo sequence.

Including a modification code (e.g., an internal TAMRA attachment) in your sequence during the ordering process will add a dT residue at that position. Thus, the modification code /i6-TAMN/ within the sequence TCGA/i6-TAMN/CGTA will incorporate a “T” nucleotide at that position. The final sequence will be: TCGA “T” CGTA, with TAMRA attached to the additional dT residue. It is therefore important for you to account for the necessary dT base in your sequence prior to ordering, i.e., when assessing binding to a target sequence and in any calculations, such as melting temperature (Tm). 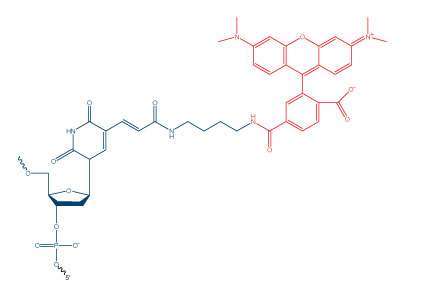 Figure 1. Internal TAMRA NHS Ester. The structure shows the link between the TAMRA NHS Ester (red) and the amino dT (blue) required in the sequence for addition of this modification.